Ruben Impens won the silver Camera 300 for his work on Belgica by Felix van Groeningen at the Manaki Brothers International Cinematographers Film Festival, the oldest Festival devoted to the craft of Cinematography. For it’s 37th edition it returned to its roots in Bitola, Macedonia.

The jury, chaired by Phedon Papamichael ASC, GSC, and composed with Claire Pijman, NSC, Alin Tasciyan, Vladmir Samoilovski and Gokhan Tiryaki explains that they awarded him : “For reflecting the intensity of emotions and allowing us to enter into the world of the characters through its energetic cinematography.”

Ruben Impens received the award with great emotion as the others winners Jani-Petteri Passi who was surprised to win the Golden Camera for the Finnish film “The Happiest Day in the Life of Olli Maki” since it was the first time that he and his crew had worked on a feature film, as well as Mattias Troelstrup DFF, winner of  the Bronze Camera for the French film “Bang Gang” and Luca Cousin winner of the Small Camera, for the short French film “Le Park”.
. 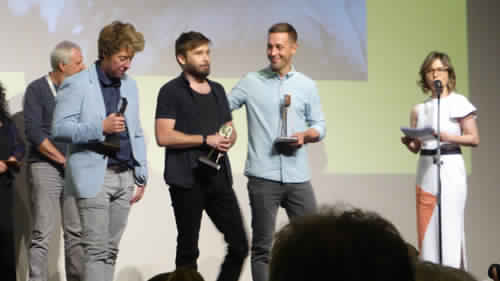 Ruben Impens, J-P Passi and Mattias Troelstrop.
.
RI : “I like shooting people on stage, but it’s really hard when I’m on the stage myself. I would like to thank my wife, who is here, for all the support she’s given me, because this is not a regular 9 to 5 job and at moments it can get intense. I would also like to thank the director of “Belgica” who is a good friend, as well as the jury that gave me this award.”
.
Synopsis : Belgica is the story of two brothers: charismatic and temperamental Frank—a husband, father, and an incurable womanizer—and his ambitious-but-green, one-eyed younger brother Jo, who owns a dive bar called Belgica. When Frank helps Belgica become the place to be for great music, beautiful people, and debauched fun, the brothers become business partners to expand the bar. Belgica quickly becomes bigger and better, and the brothers seem to have discovered the formula for success—until they learn that running a business on this scale is more complicated than they realized, and their relationship and personal lives suffer.