Koca Dünya (Big Big world) directed by Reha Erdem and photographed by Florent Herry, SBC, has been selected in the official competition Orizzonti of the 73rd Venice International Film Festival.

Synopsis : Ali and Zuhal take their first step out of the orphanage into this big world committing a crime. It becomes impossible for them to live amongst people now, and the forest they take shelter in becomes a desert island for them. A boy and a girl that were thrown out of the civilized world would live the entire human story from scratch.

Home directed by Fien Troch and shot by Frank Vanden Eeden had its world premiere at the festival in the Orizzonti section.

synopsis: Home focuses on a group of youngsters and the adults who surround them. Both find it difficult to communicate and to understand each other’s closed-off worlds. Into this community of two struggling generations arrives 17-year-old Kevin. He starts an apprenticeship at his aunt’s store and moves in with her and her family. Kevin quickly adapts to his new home and gets along with his cousin Sammy. Through Sammy’s circle of friends he meets John. Soon we discover John lives an unbearable situation with his mother and Kevin feels the urge to help his new friend. One evening fate intervenes and questions of betrayal, trust and loyalty start to impact on their daily lives more than ever. 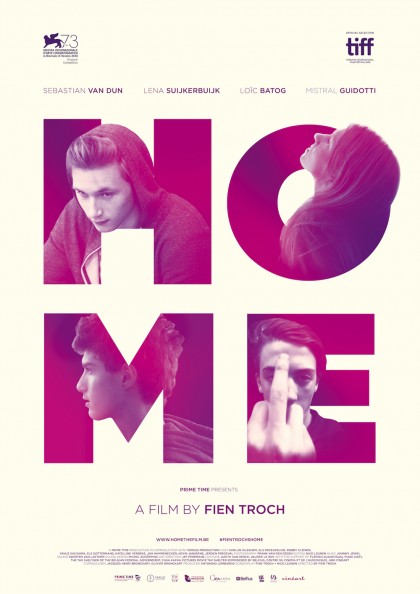