North Sea Texas is a film by Bavo Defurne and shot by Anton Mertens. 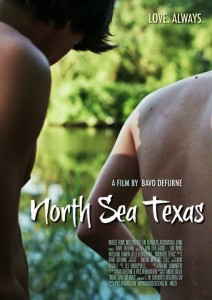 Pim lives with his ex-beauty queen, single mother in a small town on the Belgian coast.  An introverted boy, Pim brightens up his days with drawing and dreaming up fantasy lives.  He expresses his emerging desires through a secret collection of “borrowed” objects that he keeps in a shoebox.  With teenage years comes sexual awareness and he now draws and dreams of Gino, the older boy next door, his motorcycling hero. But this first love seems likely to end in disappointment.  Pim’s mother, Yvette, has dreams of her own.  Tired of unwanted suitors and bored with small town life, she longs to leave everything behind and to see the world.  Pim and Yvette’s dreams collide when handsome Zoltan arrives in town with the fun-fair and becomes their new lodger.

I met director Bavo Defurne for the first time in ostend after having read the script. It’s based on a youth novel and Bavo talked about how he wanted this to be an optimistic, sunny and colorful film, Pim is in love and everything around him is beautiful in his eyes. Wardrobe and set design will have to reflect this and lighting should be high key and warm. The cast includes some seasoned actors and youngsters making they’re film debut. In rehearsals they had the young actors play out the entire film in sequence, so they would get an idea of how the story and their characters evolve. Also they worked a lot with to give them enough backstory in order to play their part. 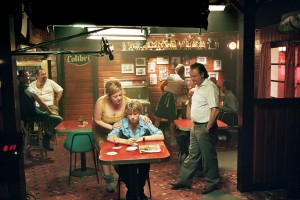 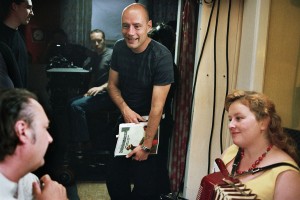 The film was budgeted for a 22 day schedule. Nearly not enough to cover the poetic script and all the details that make up Bavo’s world. So the goal was to be able to speed up lighting the film without giving it a documentary feel, which might be the obvious solution to meed the budget but doesn’t fit Bavo’s vision for the film. As for framing we opted for a locked off style, with precise compositions. In the set design Kurt Rigolle used vibrant colors, vintage wallpapers and objects to evoke the warm summer in an undefined period between the sixties and seventies.

We found our main locations in Zelzate, an old workers neighborhood was going to stand in for our costal village. A lot of the homes were not occupied and we’re allowed to pick the ones that suit us. It quickly became apparent that the rooms are very small and that filming in them was going to be a pain. Gaffer Dirk Van Rampelberg presented me with a system developed by dp Patrick Otten: 15mm tubes with joints allow to make a lightweight and compact rigging system to hang light from. We started the shoot in one of our smallest locations, a 2 x 3 m bedroom. Light is pushed in the room through a small window using a small hmi and kino vista singles are hung from the Otten rigging, which proved its use. Luckily we had a gentile crew because moving around in these close quarters was a hassle and took time. One of the rooms was recreated as 10% larger studio version in a nearby community center so walls could be flown and we could make some shots which otherwise would have proven difficult to make in the actual location.

As the summer was a bit wet and grey that year, we had to rely on lighting the interiors to give it that sunny feel. Also because a lot of the story takes place at sunset, so we blocked the ambient cool daylight and replaced it with some direct warm sources to give it that golden feel.

For scenes set at night on a beach road I tested the Red One camera for its day for night capabilities. In contrary to what I expected I favored shooting the scenes in soft overcast weather. It allowed us to capture more of the facial expressions of Pim as opposed to shooting it in a sunlit backlight situation. Somehow the Red’s limited ability to handle highlights made the contrasty images look fake as the sun hit Pim’s blond hair. As some of these shots had to undergo a vfx treatment I opted to limit the noise level in the dark areas and shot these images at normal exposure, protecting the highlights and making the underexposure later on in grading.

The title of the film refers to the story’s lonesome cafe located on the beach. As these kind of places have long since disappeared a matte painting was made by vfx company Grid to integrate a real cafe in a beach environment. Also a view of the modern seaside town of Nieuwpoort had to be altered to fit the proper time period.

During the shoot we made stills from the rushes using the red files and the redcine program, so I could make some reference pictures for the color grading, which was done by Olivier Ogneux. The final image is one of rich colors and contrast, which the Red did quite well.

The film went on to be selected at many festivals including Camerimage, and winning awards in Rome, Cape Town, Miami and Montreal.