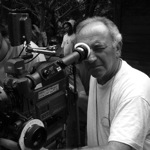 His background is impressive: documentary, short and feature films, commercials, music videos or television series, Michel van Laer does not stop a second!

Currently filming the television series ASPE (aired on VTM), he works with the Arri Alexa. Hosted on the set, the atmosphere is very friendly. With the whole team, actor Herbert Flack (Pieter Van In the screen) is on the warpath … with a smile and good humor for a ninth season!

Tell us about the camera which you use on ASPE ?

MVL: I work with an ARRI Alexa. This is a camera that exists on the market for about two years now. It was made by a specialized firm. They have developed a fantastic tool, the “Rolls Royce” of cameras. At the menu level, it is very simple, there are several possible settings. We can turn feature films with a very high definition. It is also too high for television but you can then opt for a lower resolution.

Why this choice of  camera for TV?

MVL: To take advantage of the latitude of contrast in natural settings. We need less light inside to be able to compensate with the outside.

How different are feature films and television series?

MVL: There is a real paradox between the two. With a good TV show, we reach at least 800,000 viewers. In contrast, with a feature film, after a four week run at the cinema, it barely reaches 200,000 viewers … I have great pride in shooting a TV series even if a movie has a different character. It is often more polished, there is more time and resources. In TV it can be a bit of a factory, which can be nice as well, especially on the series ASPE. This is a good team, a locomotive that rolls. 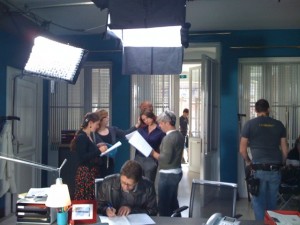 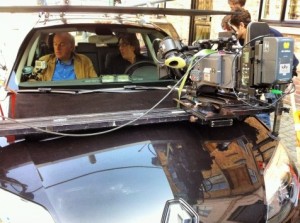 Eight sequences per day for a series, the double of feature film…

MVL: Accurate, although this depends on the complexity of the setting, the blocking and course the director. A feature film of 90 minutes is shot in nine weeks. On ASPE however, we have 8 days to complete 50 minutes. We must therefore work much faster, the result must be immediate and good … if not we lose viewers.

I am very happy to work for this season with the Alexa. This camera is fantastic! It is possible to shoot for content at low resolution, medium or high. It also can be used to film at high definition and transfer it to film because not all cinemas are equipped with an HD projector yet.

These cameras are they widespread?

MVL: In Belgium, I believe there are about fifty. Many dop’s have their own Alexa. In proportion to other countries like France and Holland, our country has the largest number of Alexas.

For over 35 years I have been a director of photography and cameraman and I always had my own super 16 cameras. We had to have them: we had the responsibility of good technical quality and the cameras. This now is the result of this policy in the years 70-80. 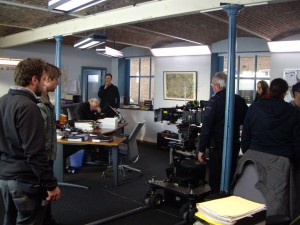 Present for the fifth season of ASPE, but your first using the Alexa?

MVL:  yes indeed, I was shooting with a Panasonic Varicam. Not bad, with a look close enough to the film. But to achieve this aspect of “silver”, there’s nothing like shooting on film. Unfortunately, it will disappear slowly. In television, it’s already to late. Kodak is experiencing difficulties, Fuji has turned to produce cosmetics. It is true that it’s a shame …

MVL: On april 20, ends the second block. We start again mid-May for 4 blocks, four times 32 days. The last block ends in late October. This is already my fifth season. I have great respect for the production (Skyline). It cares for its team: we are well housed and fed.

A 10th season is already planned?

MVL: there are talks about it but it’s not official yet.

MVL: As I’m taken for almost a third of the year with the series plus preparations I do not have much time for other things. But in the meantime I would like to film one or two commercials or a feature film with a good script and … an Alexa!