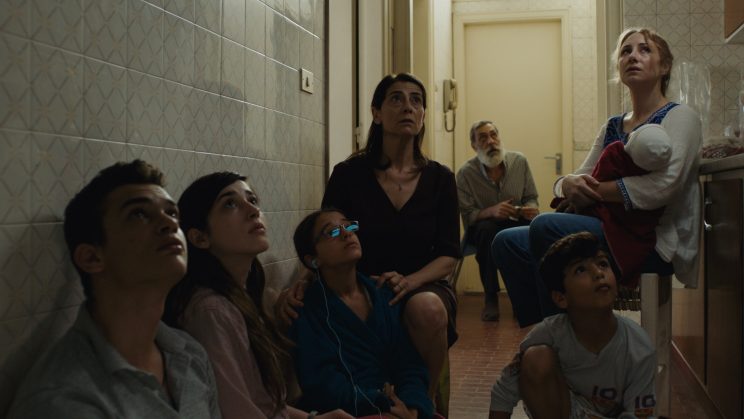 On the top floor of a modest apartment building near the Brussels South Station lives a young independant, free, dynamic, and inviting woman. The light fuses from everywhere, from the North to the South, in every room, and it lights up the eyes of this creator of  images ; the orchestra’s first violin as it were. For Virginie this is a place of passage because this young woman is a nomad, always ready for far away departures.

Recently her efforts payed off as Virginie Surdej received the best cinematography award for her work on the film ” Insyriated” by Philippe Van Leeuw at the 2018 Magritte du Cinéma. And she was accepted as a SBC member.

Virginie, of Polish origins,  graduated from the INSAS film school at age 20 ! After graduation, she decided to continue studying and went to the Léon Schiller Institute in Lodz Poland, the school that formed the uncontested masters of the Polish cinema: directors like Polanski, Wajda, Munk etc, but also DOP’s such as Pawel Edelman (“The Pianist” and Wajda’s last movies), Andrej Sekula (“Pulp Fiction”), Jolanta Dylewska (“In Darkness”) .

Why did you decide to continue studying after the INSAS ?

VS:  I considered that as I started studying when I was very young, maybe too young, I had to gain more maturity. I didn’t want to start working right after finishing the INSAS and Poland did also allow me to get back to my roots. In Lodz, there were more technical means available than at the INSAS because the Communist Regime supported the cinematographic expression.

You immediately alternated between shooting documentaries and short films. What did that offer you ?

VS: I never felt there was a devision between documentary and fiction. At school, we did both. And I still alternate between drama and documentaries. For me the link between the two starts with the same question: how to put the enriching experience of making a film and your knowledge to use for every project; knowing that for each movie, everything has to be done over again ? 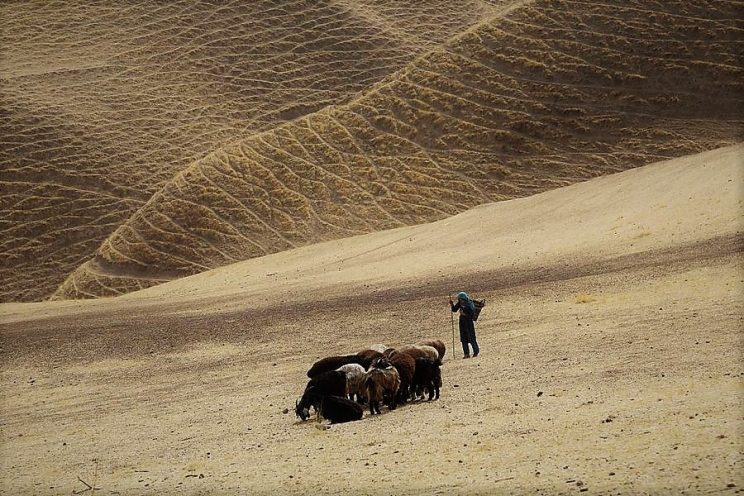 “Wolf and Sheep” by Shahrbanoo Sadat

Was this feature film, shot in Tajikistan, difficult to bring to the screen ?

VS: This co-production between Denmark and France was really hard to set up because it was impossible to shoot in Afghanistan. However, the young director Sadat had one paramount desire, to depict the Afghan landscapes, her village and its inhabitants. The young director started out making documentaries thanks to the “Ateliers VARAN” in Kabul and she learned making films on the job, directing and shooting her own movies.

This fictional story takes place in central Afghanistan and is inspired by her childhood in a rural community, ruled by believes dating back from middle ages. Sadat wanted her film to be accurate and authentic. She is proud of her country and wanted to render an image of a rural and rough region, where the shepherd’s kids, the heroes of the movie, while being on their own disrespect the adults’ rules and meet up in the mountains.

Finding the landscapes and locations to represent the rural world she grew up in was a real challenge. After scouting for one week in Tajikistan, we found a valley that suited her. During prep , it was necessary to pin down locations; to determinate the camera angles, to plot the position of the sun from sunrise to sunset.

Her village was recreated on the site and the people of her hometown were brought over to Tajikistan. It was a huge undertaking to recreate village life with these villagers, non-professional actors who ignored everything from modern society. The director worked by improvising with the kids. She talked about the scene before shooting it and then the camera followed the action. Her methodology consisted in evoking the scenes without ever handing out the script.

The entire movie was shot outside and with a small budget of around € 1.000.000.  I worked without additional lighting, relying almost entirely on natural light. Anything could happen, at any time and therefore we were more working in a documentary style, while still making a fictional drama. We shot a minimum amount of takes with the first one often being the good one. 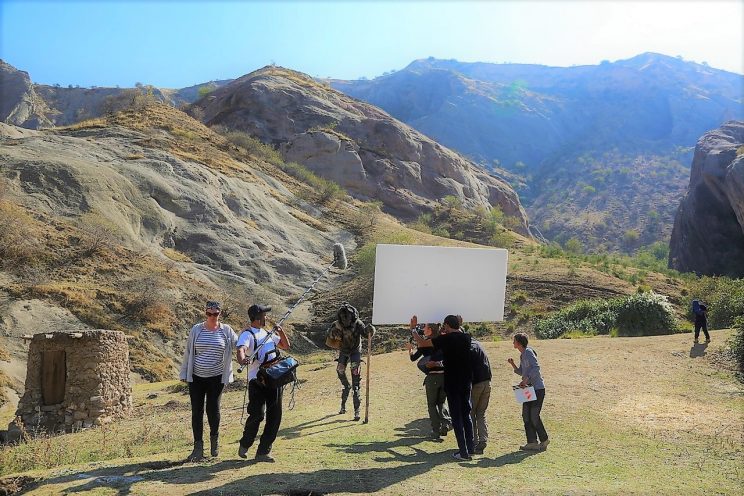 A major problem I had was that it was impossible to light the large area at night. But the implantation of the set allowed me to shoot day for night, sometimes during the day other times at twilight. On occasion I used small neons to help light the journey of the characters. Overall it was a really nice experience to shoot his project. 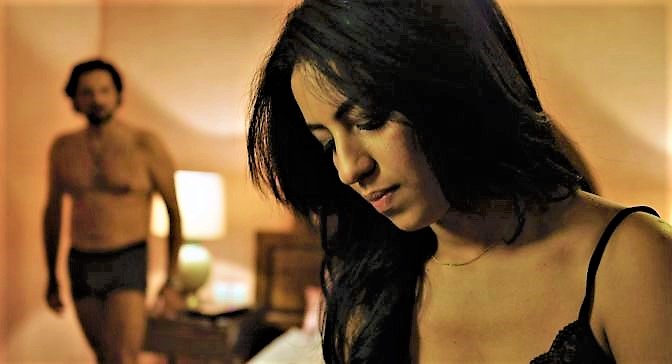 “Much loved” by Nabil Ayouch

How did your first collaboration with director Nabil Ayouch  go ?

VS: I liked his working method. The two movies I worked on with him were produced in different ways.

“Much Loved” describes the life of prostitutes in Morocco. This humble and generous movie didn’t get support by the “centre cinematographique marocain” and had to be self-financed, limiting the budget. So the film was shot in 22 days. There was no script, in the classic sense, but a good outline based on the numerous testimonials that Nabil collected during his months of research. Nabil wanted to work by improvising with his four actresses.

We wanted to work with a digital camera, handheld. We ended up choosing the F55’s from Sony with Angénieux optimo zooms, which was a good compromise due to the restricted budget, which did not allow us to use an Arri Amira. We used two cameras as we often had four actresses in a scene. As for the lighting, I used a lot of small Avalon and Kinoflo fixtures.

This shoot was hard, but challenging. 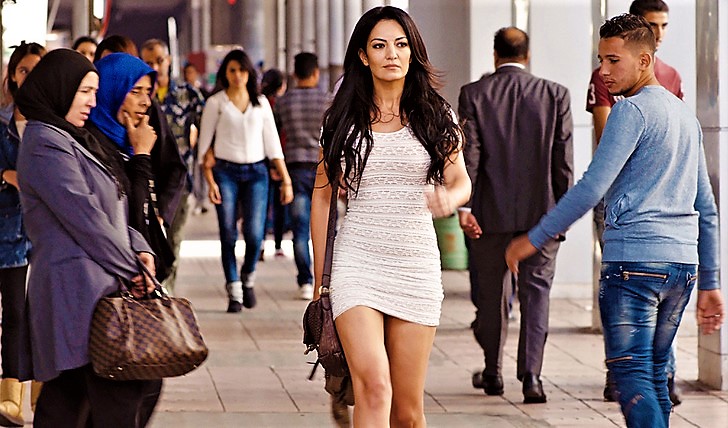 VS: For my second collaboration with Nabil Ayouch, we had a much bigger budget and we were able to make a much more complicated movie. We could afford a hefty schedule of 50 days, due to the multitude of locations.

“Razzia” is a multi-plot featuring the destinies of five characters in Casablanca, linked to each other without knowing it, between the past and the present. The movie is crafted like a mosaique, both in its staging and photography. The goal was to create a mood for the universe of each character; whether it was a clean and bourgeois universe, the one in the Medina or a small mountain village in the eighties. That was a real challenge and my second experience with Nabil allowed me to discover a different aspect of Morocco. 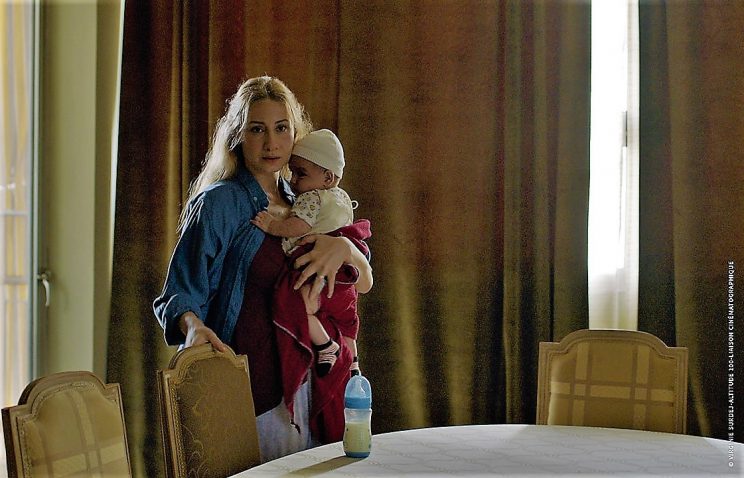 What were the several challenges that you had to solve for this film telling the story of family during the Syrian war?

VS: The main challenge of Insyriated for the entire crew was that the action takes place in one day, in a single location, with only one exception for a scene at the end of the movie that was shot outside. We shot in a maze like appartement with professional and non-professional actors originating France, Lebanon, Palestine and Syria. Upon reading the script, it was clear that we had to   visualise the  Syrian war differently than what we usually see in the media. We had to find the right tone.

Wasn’t there another challenge as well ?  Being that director Philippe Van Leeuw is a DOP in his own right.

VS: We quickly were on the same page and we shared a common idea for the visuals of the film. Philippe Van Leeuw has an intimate knowledge of cinematography and wants to service the story with it. On set, one directs and the other creates the lighting  and compositions. Philippe was able to transmit his vision to someone else. I am grateful for his confidence in me and happy with the result as he had some precise demands.

You rehearsed for one week on location. Why ?

VS: It was essential to form this family consisting of actors originating from different horizons. It created connections between the characters living in this closed space but also with the crew. Besides this the camera had to be close to the actors, it glides in front of them, turns around them like an eel, it enveloppes them. Philippe’s desire was to represent the reality of the events experienced by the family. The tension and the danger that had to be build up over the course of the day.

There were a lot of choreographed scenes that could not have been improvised and ran throughout the whole of the appartement, but also some were static and composed scenes. We knew the place by heart, so we tried to use it optimally. Shooting in one single location, the challenge was to reinvent the light every time to keep it fresh. I used quite a lot of fixtures but the goal was to not make it feel the lit and find a natural mood in a different way, by using curtains or shutters as an important element to create the imagery.

Sometimes, we would shoot in six or seven different rooms in one go and so it was important to balance the light levels. We had built a technical ceiling with a lot of small and versatile Avolon fixtures attached to it. To create the look of power blackouts, we used gas lamps fitted with led’s and emergency neons. Lighting the film was complex as Philippe wanted to shoot as much as possible in a chronological order. Sometimes we had to create a sunset effect in the middle of the day. In order to control the natural light in the appartement, we had a set of frames outside the windows with silks and black cloth so to be able to control the backgrounds and be able to create the desired effect any time of the day.

I used an Arri Amira that I had first used while shooting “Wolf and Sheep”. It is well balanced and I find it comfortable to use handheld. The use of the Cooke S4’s gave a softness to our images because I don’t like the hyper sharpness of digital capture. The most common focal lengths used were the 32, 40 and 50 mm. Philippe Van Leeuw works in a precise manner, with attention to detail. There is a “Bressionian” side to him and it is very apparent in “Insyriated”. 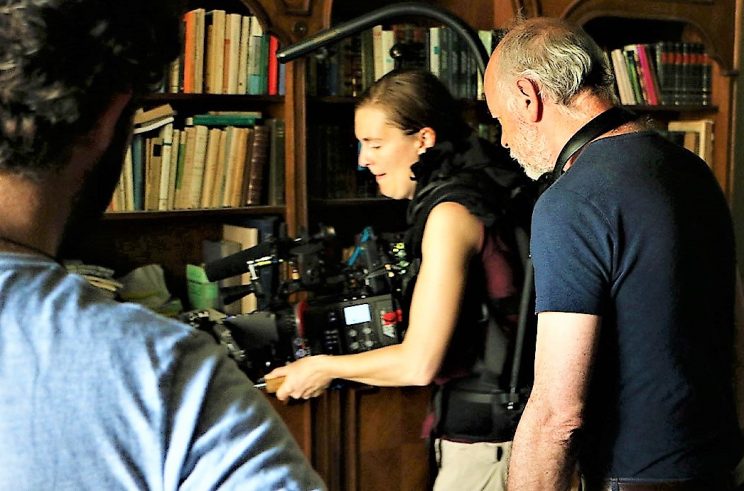 You are leaving for Peru for two months. What for ?

VS: I am returning to documentaries with two female directors: Bénédicte Liénard and Mary Jimenez. It is on an important topic: human trafficking.

After that, I’ll come back home for two weeks and then go to Guatemala for a feature film.

Why don’t you try directing ?

VS: I find a lot of pleasure in working with the others. I like to re-discover directors with whom I have worked already and work on new projects with them. I also like to meet new ones. It allows me to discover new universes. I don’t feel the desire to direct but it might happen one day.