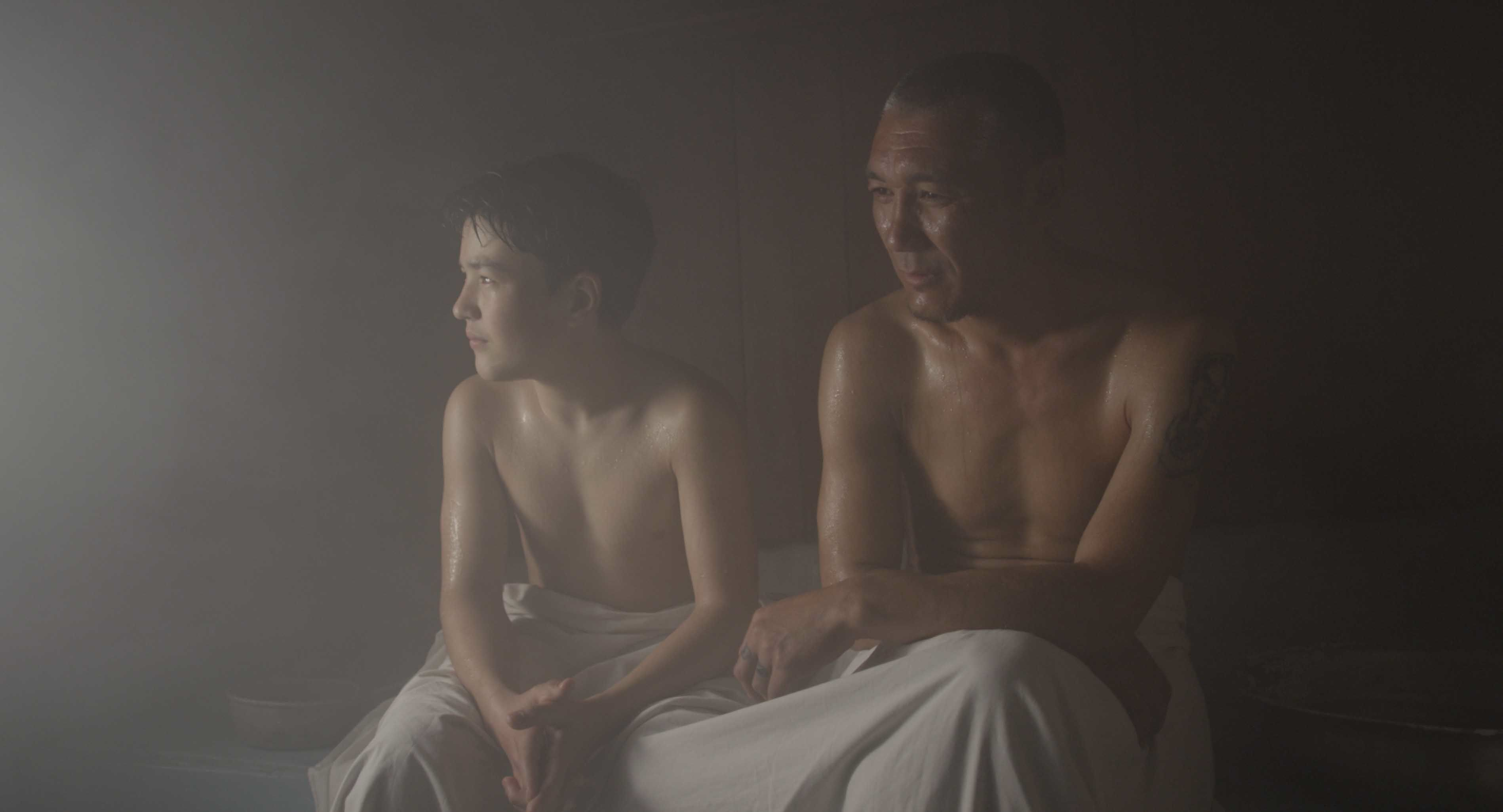 In the early hours of the Kazakhstan independence, four moral tales, four teenagers who will burn their wings to survive in a place still marked by a century of soviet system.

“The Wounded Angel is the second film in a trilogy about teenagers and their complex relationship with the world. The first film, Harmony Lessons, featured intelligence and cold math, while the second is more focused on feelings. What is adolescence? It is the most critical period for a person, when something can snap in the mind and a person gets lost forever. I am interested in whether I can find the stretched string within the teenager that is destined to snap. A readjustment of values – harsh, brutal, ravenous, but rightful in a way – follows. Why would a teenager and his inner world be interesting? First, it is because of his inner contradictions and impudent honesty. This is what makes the world deeper, bigger and more complex for a teenager. In general, a teenager is a maximalist. He always tries to dig deep into the world’s problems, and he sincerely wants to save the people close to him from suffering. Teenagers are irrational. I am concerned with their unstable mentality and impulsiveness, which might sometimes” – Emir Baigazin

Emir approached me through his producer, Anna Vilgelmi. His previous and first film, Harmony Lesson won an award at the Berlin 2013 Film Festival. There he saw The nun also in competition and on which I had worked. After reading the script, we talked on Skype, and very soon, he asked me to join him in Kazakhstan to prep. I had never read a script like that, it was a mix of social fact and surrealist poetry. So I was pleased with his offer.

The film was coproduced by the Kazakh Film Studios. It’s a State organ, based in Almaty, a remnant from the soviet period, with an operation close to what it would have been like back then. All the camera equipment had to be supplied by them. So I was constantly dealing with that organism. Fortunately, the production gave me a personal assistant, Kairat Temirgali. From the camera department at the Almaty film school, Kairat was very helpful and efficient during the prep and the shoot. 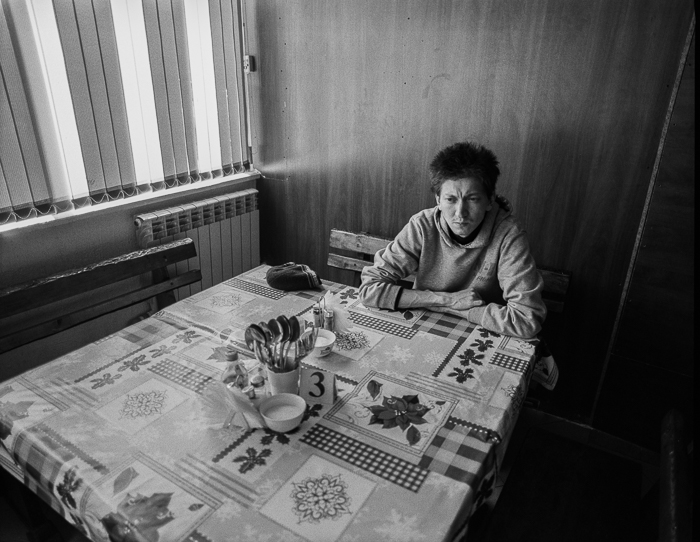 I discovered extraordinary things in their basements, on their shelves, in their offices and their hangars. A real Ali Baba’s cave for cinematographers !

Fortunately, I also asked the production if I could bring my camera assistant and esteemed colleague, Sylvain Zambelli along. Quickly I tasked him to test all the digital camera equipment that could interest us and to choose one regarding my demands. After a lot of twists and turns, we finally shot with a Red Epic rented from a private owner in Almaty and with a set of Zeiss Ultra Primes from the Kazakh Film Studios. As there were no filters available, TSF send us a set of Hot Mirror.

As For lighting gear, after a lot of researches and discussions, all the sources I needed could be found in the hangars. As the film was mostly lit with candles or in the shadows, I brought from France, a set of Maluna Luciole lights, the Nano and Pico versions, rented from TSF.

The rest of the equipment, that I though I would need in order to adjust the shadows and the candle effects, was found by my Kazakh gaffer, Ilysha Miller, in the Almaty Grand Bazaar’s stores, and we build it together.

The title of the film comes from a painting by the symbolist Finnish painter Hugo Simberg. This painting, along with the drawings and paintings of Sergey Kopylov, the art director and close collaborator of Emir, really inspired us. 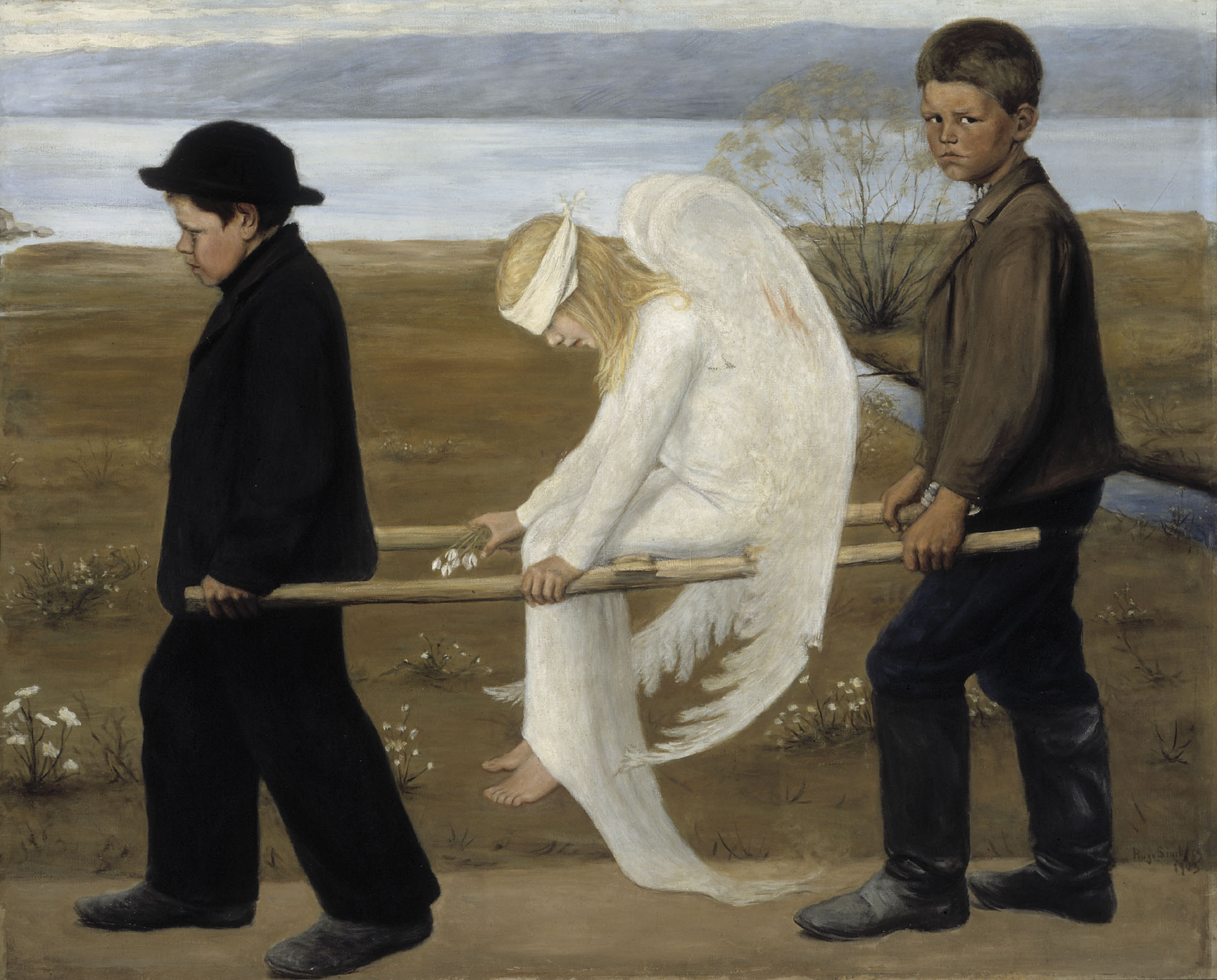 The wounded Angel by Hugo Simberg 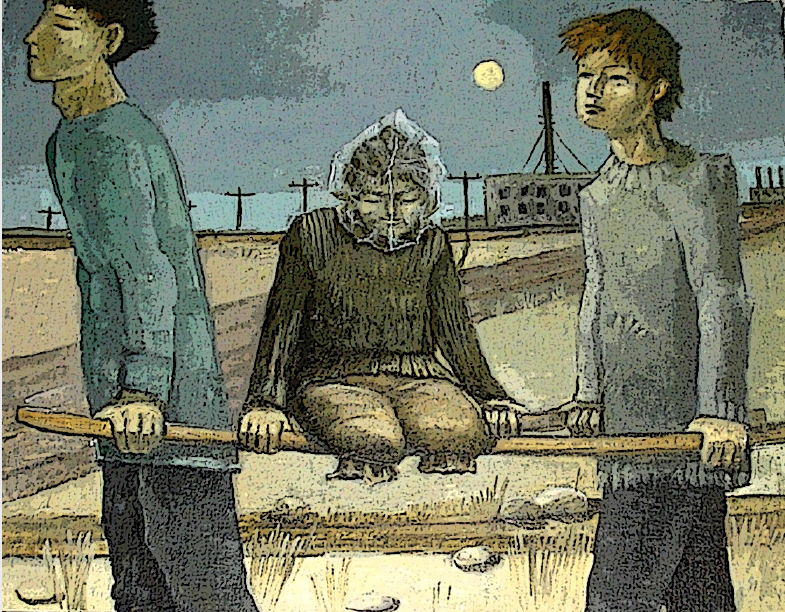 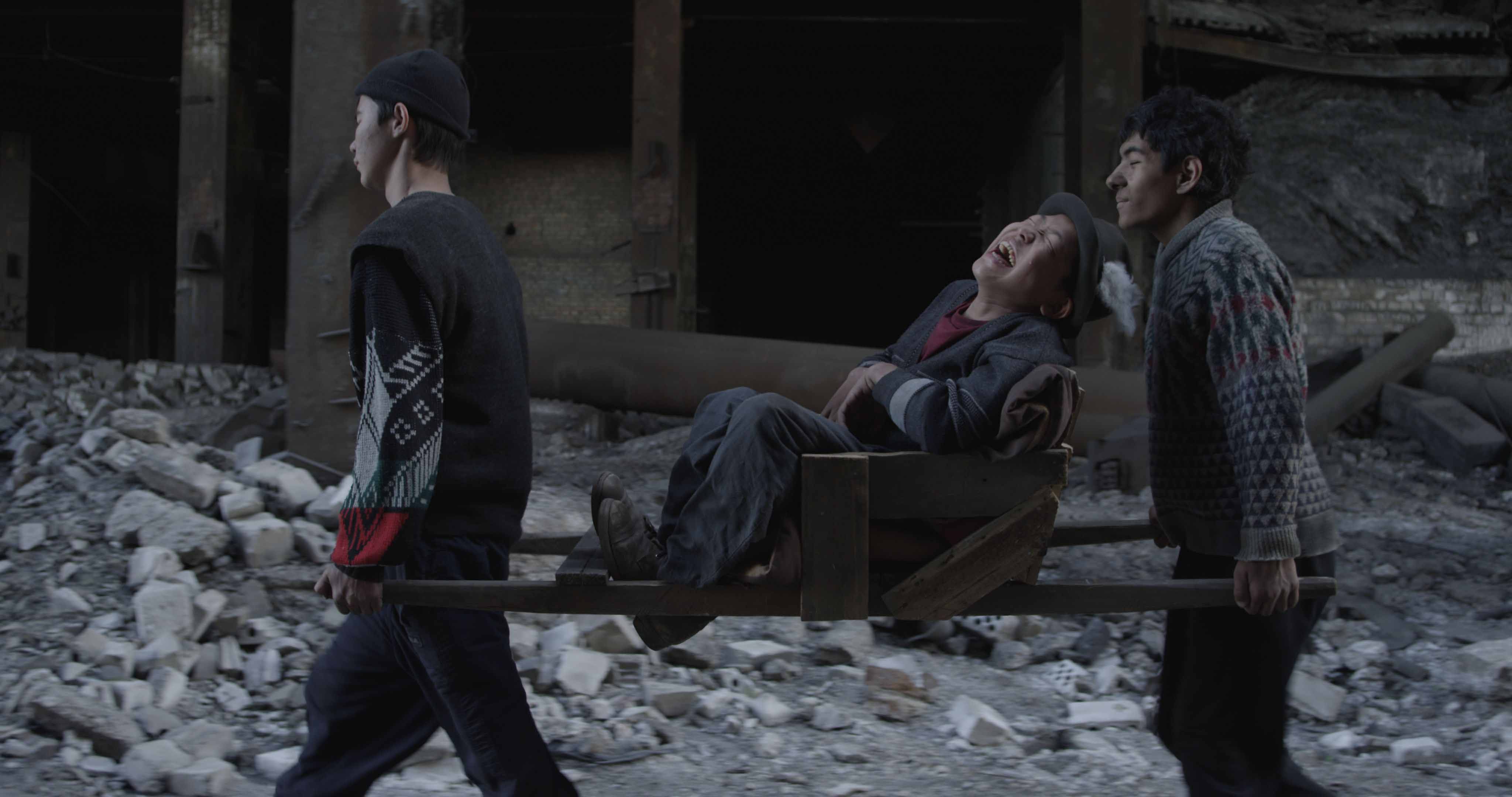 Photogram of The wounded Angel Emir, the director and Sergei, the art director on set

I tried through the lighting and the framing to pass on the spirit, the naivety, the simplicity of those references. 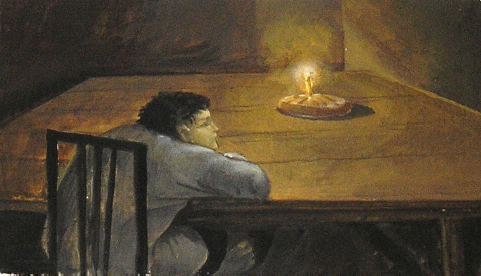 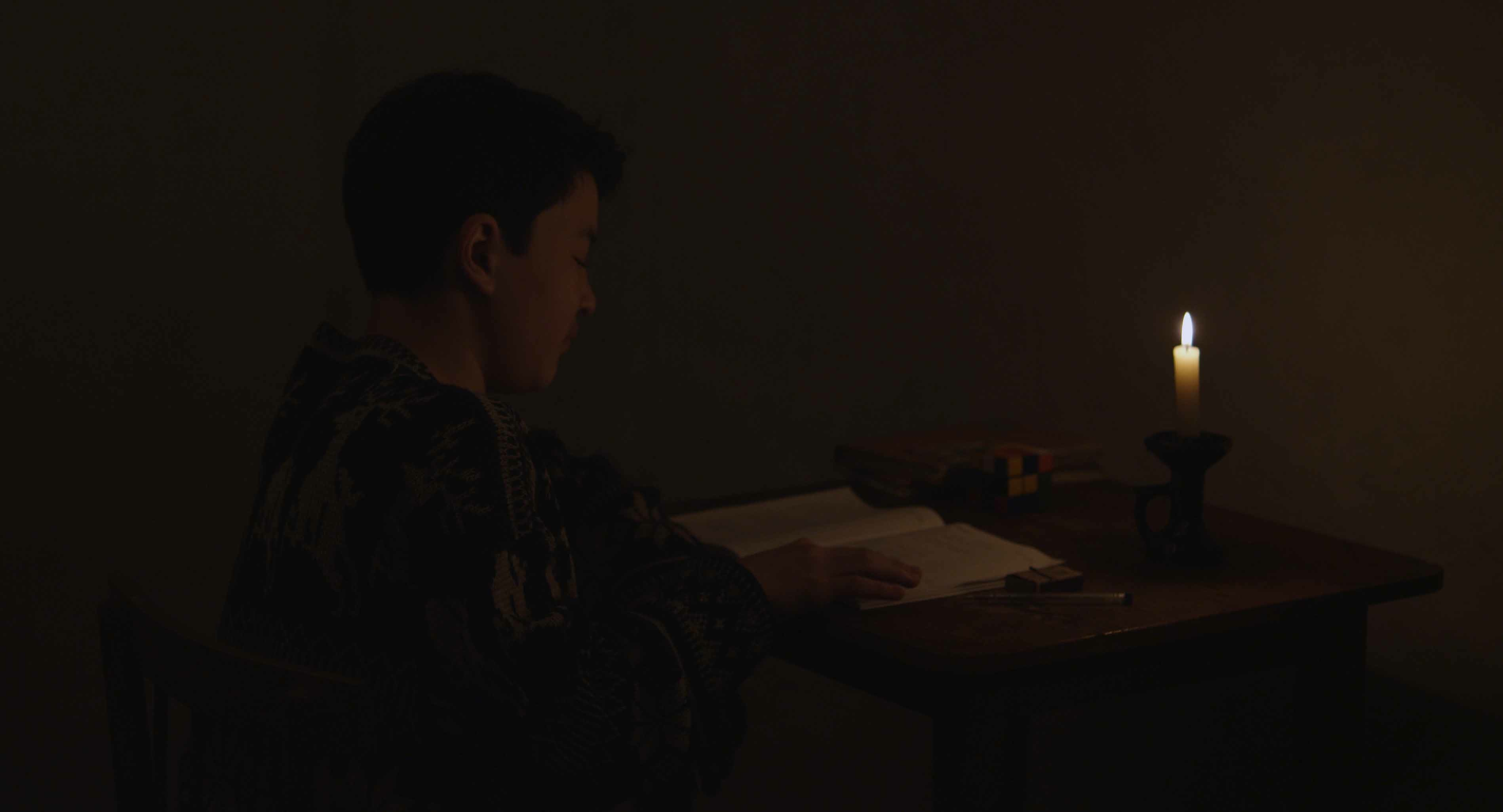 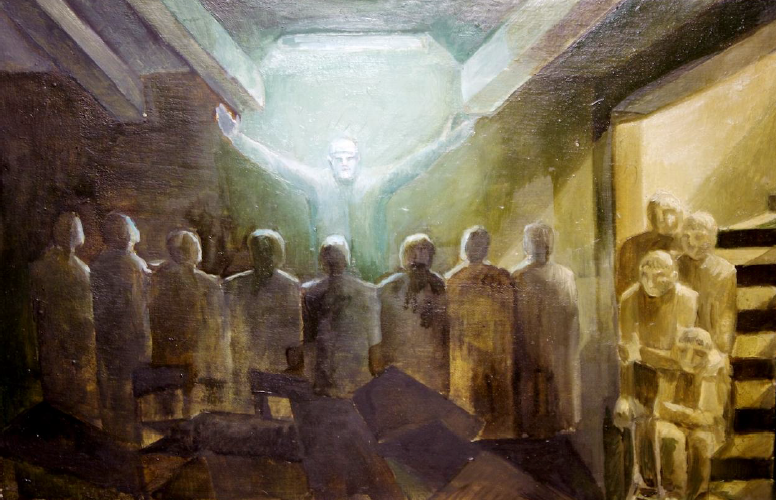 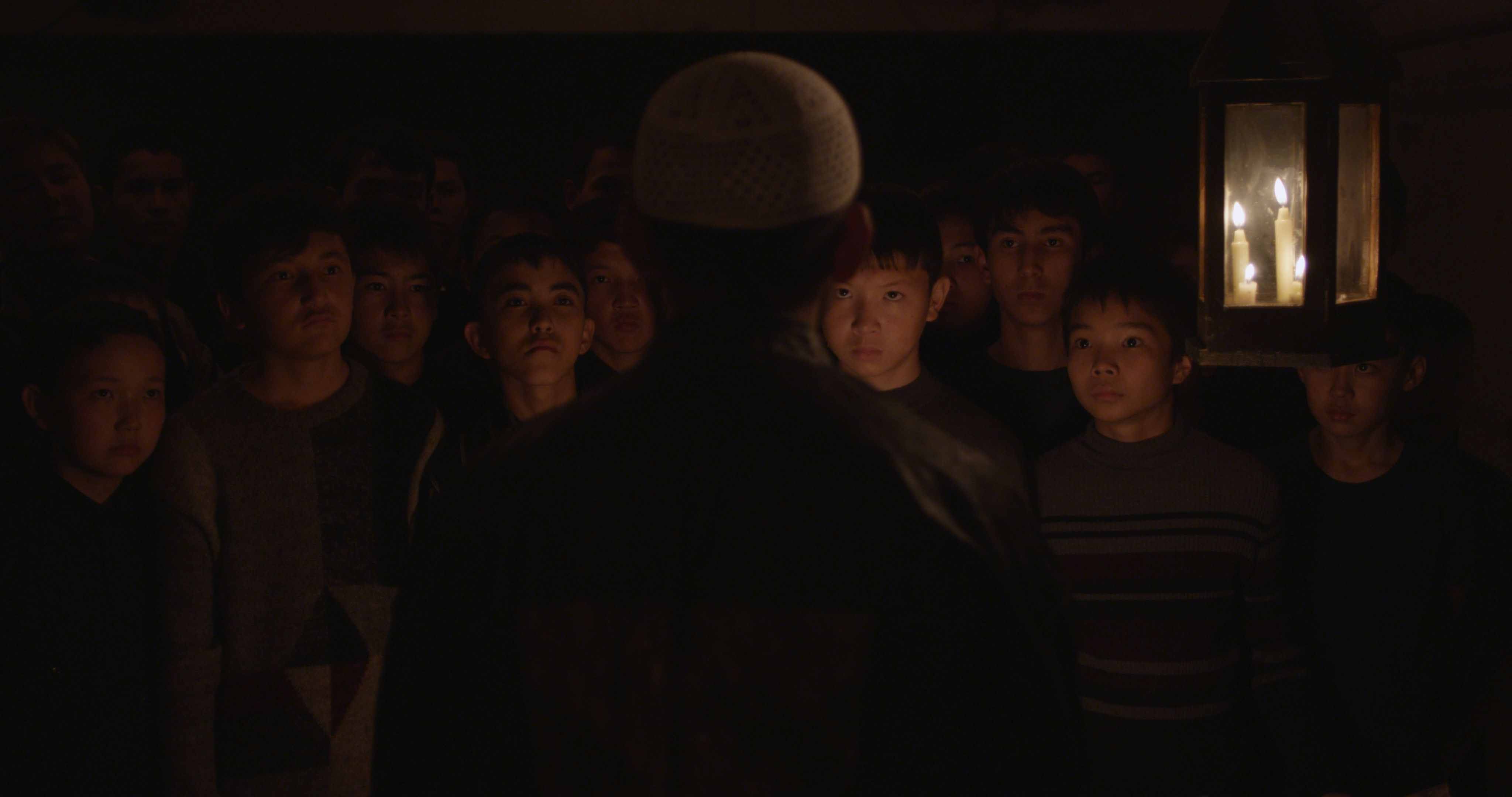 As reference for the shadows and candle scenes, I have shown Emir the paintings of Georges de La Tour. I tried to transcribe his atmosphere, but with white painted limestone walls, it wasn’t easy. 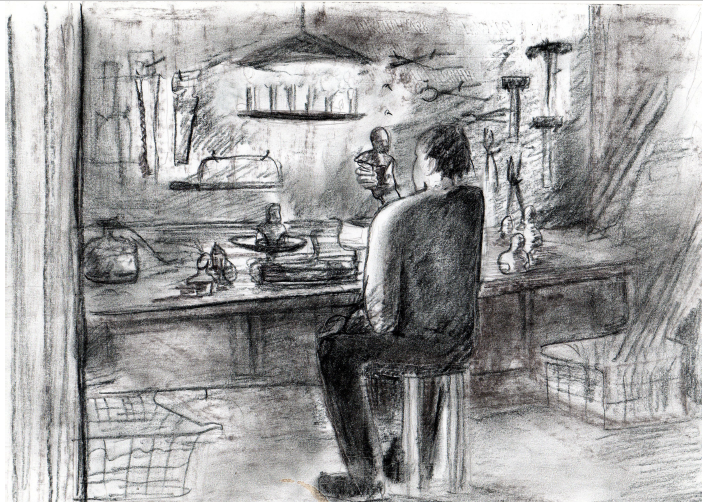 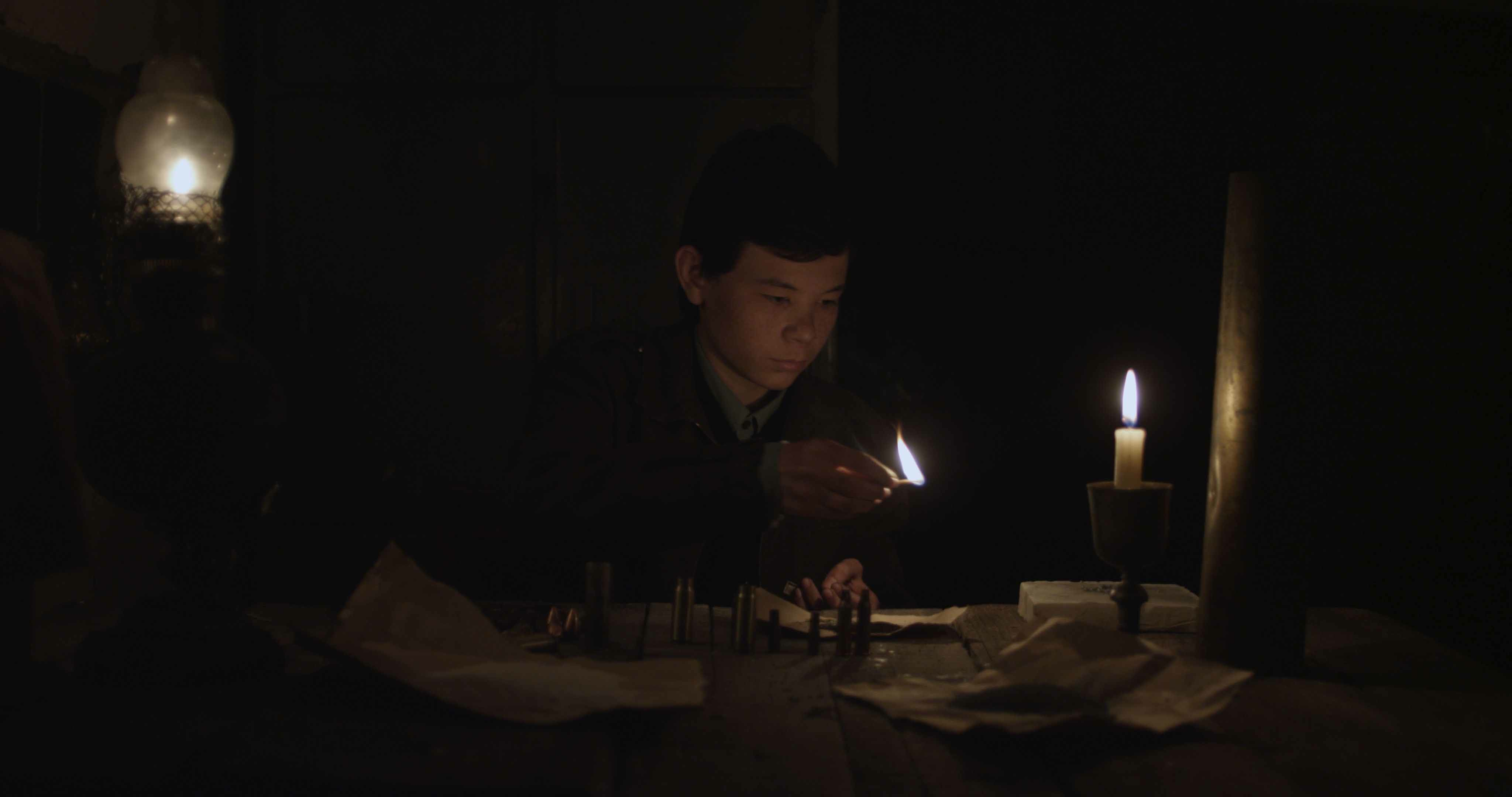 Emir works his scenes like paintings, with very few movements from the camera or the actors, which enables him to control everything precisely. It was a very long process of thinking, rehearsing and shooting. After the initial surprise, I realized that it would work that way so I did the same. 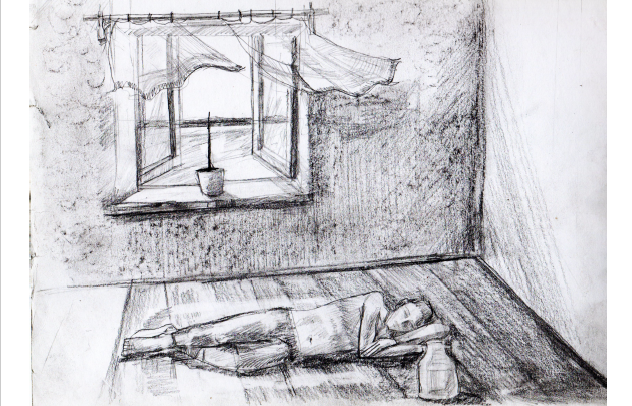 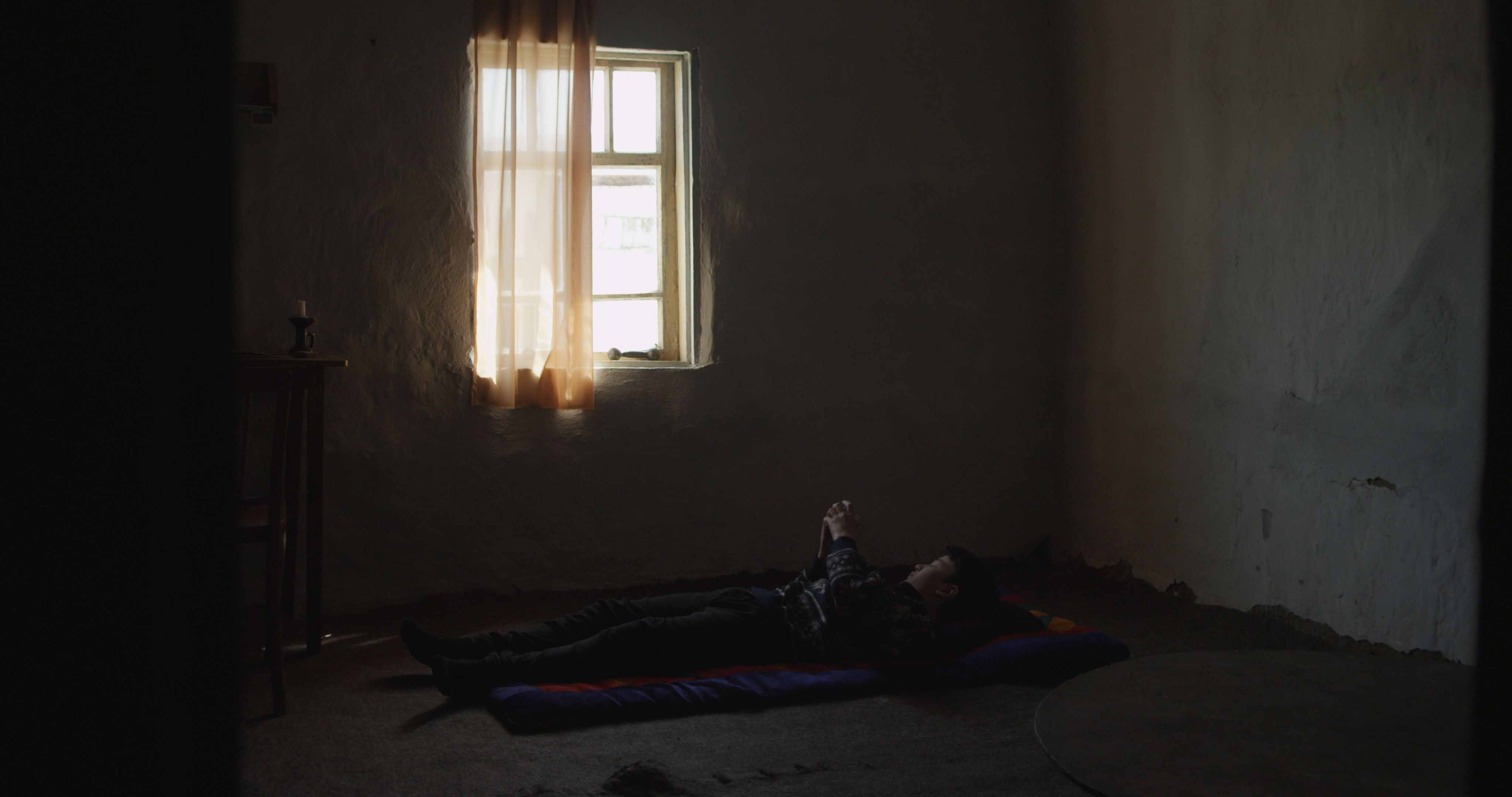 Fortunately, the young team that Emir gathered around him, was always very friendly and finally quite efficient in its particular way of working ! Most of them came out of the Almaty cinema school just like him.

I was very pleased to meet Azamat Dulatov, a young, gifted, famous locally and huge strapping operator. He asked me if he could assist the shoot at my side as if it was an honor ! The camera crew was so numerous (Sylvain had six assistants imposed by Kazakh Film and their way of working) that I hesitated, but luckily, not for long. We got along so well that I asked him to shoot some MOVI scenes that we did in the mines. His impressive physic and his operating skills enabled him to shoot these scenes easily. Kairat and Azamat formed a perfect duo that was very helpful during the shoot, but also outside… 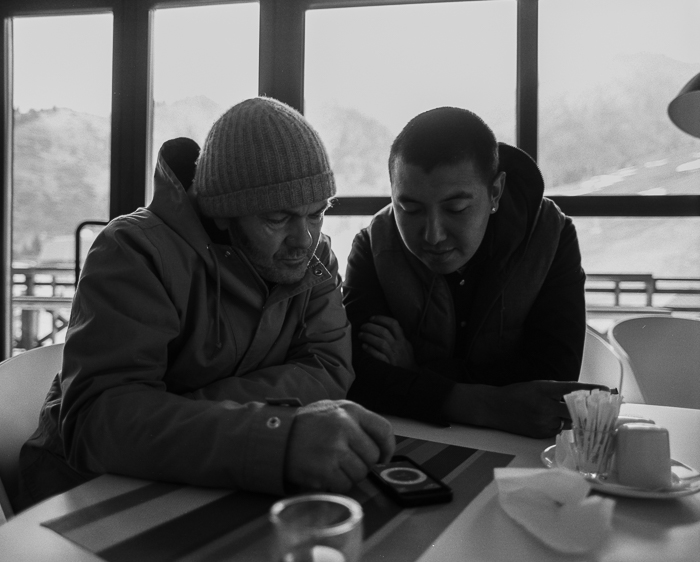 Most of the film is set indoors at night, so it had to be lit with candles, kerosenes lamps or in darkness. As I usually do, I had decided to laid on what already existed and to add only what was necessary to have enough information and latitude for the grading. The Red Epic, very dynamic in the shadow portion and the HDR that I used to avoid overexposing the flames, the candles and the kerosenes lamps were very helpful. The ambient light was given by strings of 25W bulbs on a dimmer and fixed to the ceiling. For the candle or kerosene lamps effects I used chips bags with sockets and 25W bulbs or some Lucioles Pico or Nano on a dimmer. 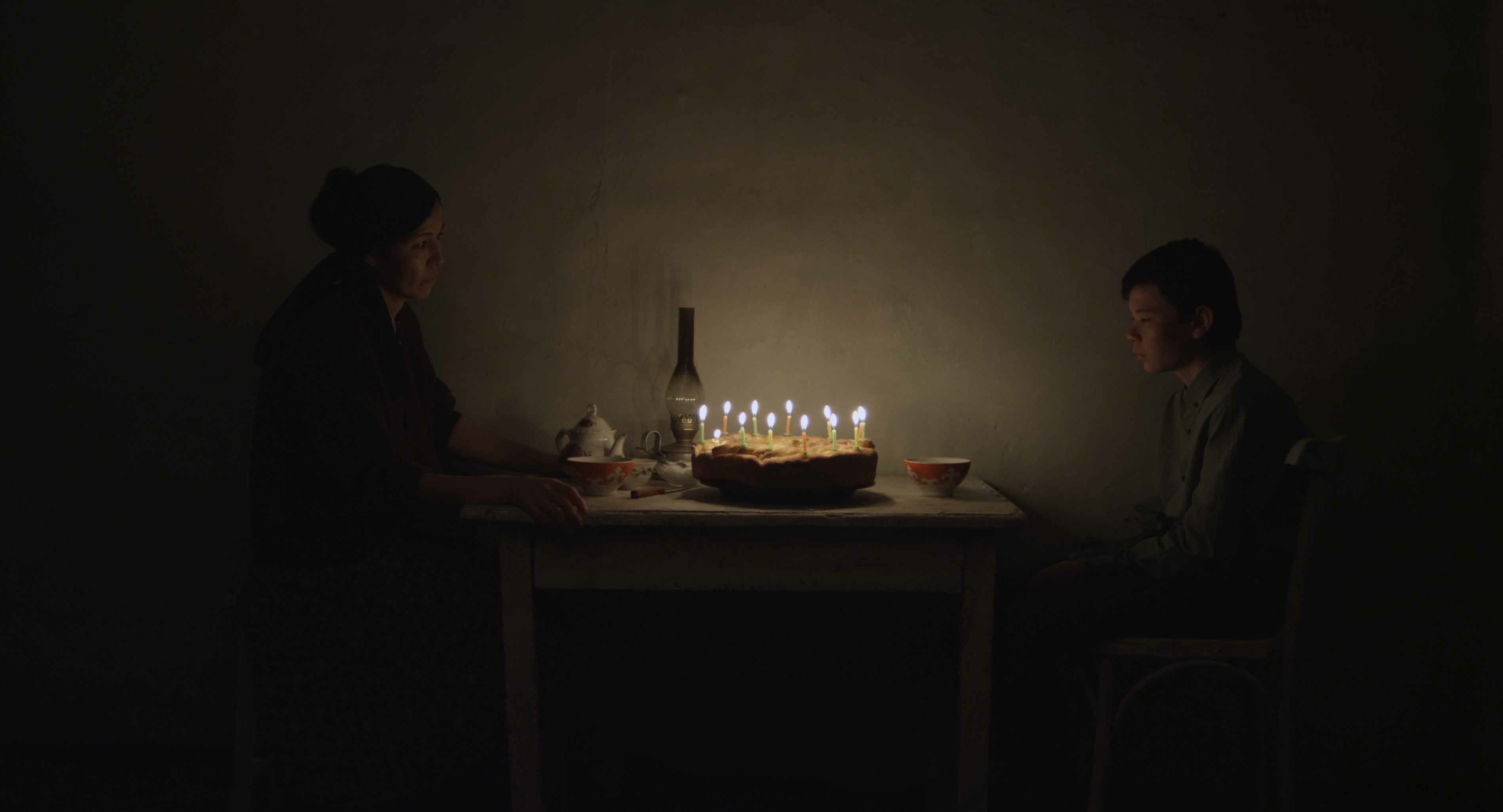 For the daylight interiors, regarding the difficulty to get the gear I wanted I decided to keep it simple ! When the scenes, the path of the sun or the weather allowed for it, I mostly played with white linen and black nets rather than using lights.

For the daytime exteriors, I only decided on the shooting order of the scenes considering the position of the sun.

The film was shot in 4,5K with a 6:1 compression. Playing with all the metadata available in the camera, Sylvain and I did some of the grading on set ! It was only possible because the working pace was extremely slow. At first it was only to pass the time, but it became a very pleasant game !

Emir did the editing at Almaty and Richard Deuzy did the grading in two weeks at the Post Republic in Berlin. Everything went well. 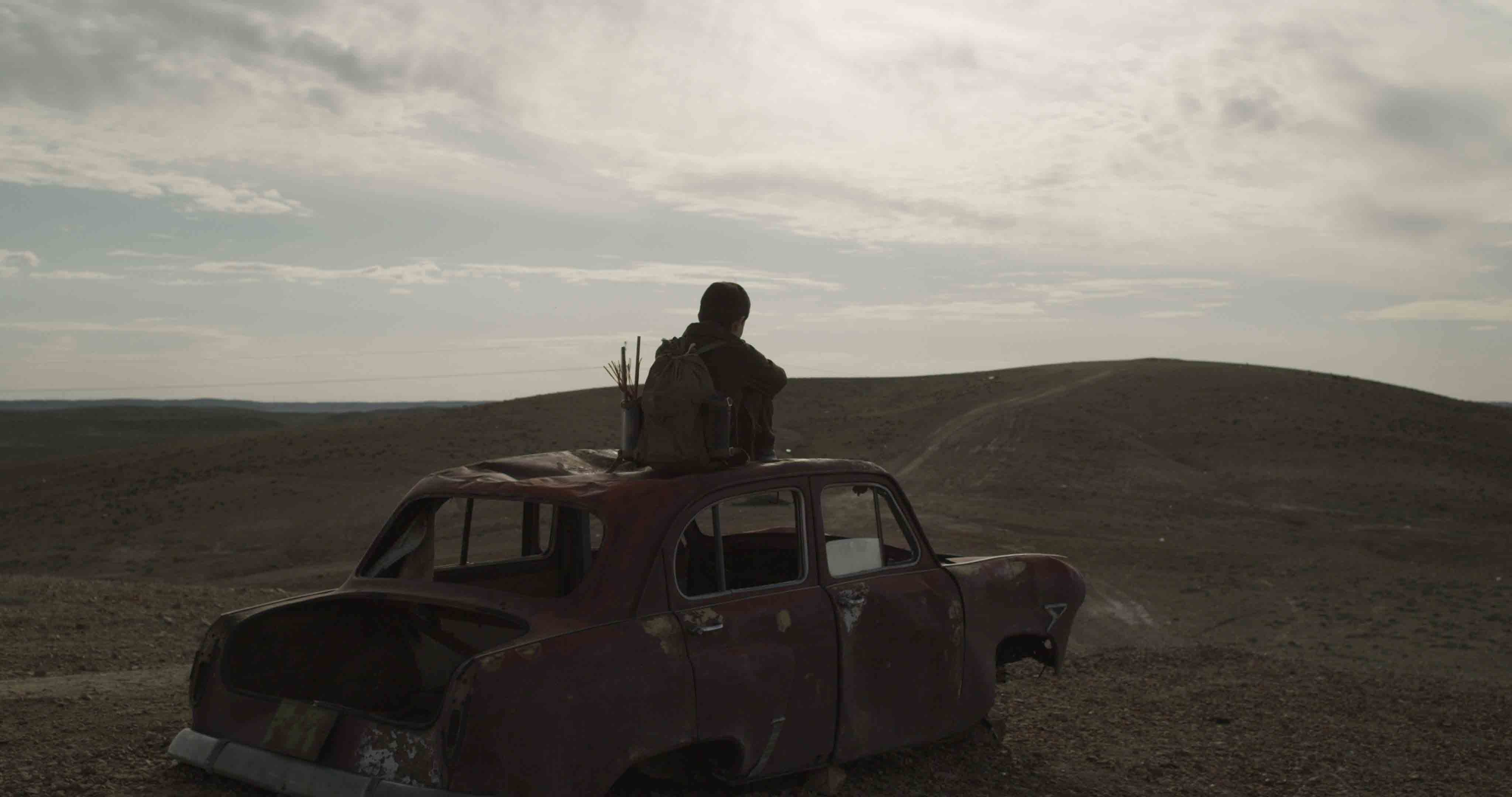 Courtesy of the AFC