Under the sun of Lièges.

Alain Marcoen, SBC and cameraman Benoît Dervaux form the team that is the backbone of the Dardenne Brothers’ films. With the release of “Two Days, One Night” — their most minimalistic film yet in terms of the screenplay, yet also perhaps their most visually elaborate — the DOP from Lieges shares with us what it is like to work with the Brothers. 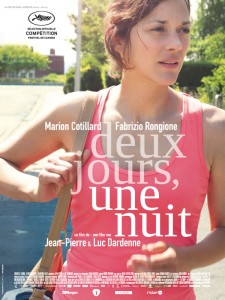 “Two Days, One Night” is sort of like the Dardenne Brothers’ version of “12 Angry Men”, isn’t it?

AM: It is true that one might draw a relationship between Sydney Lumet’s film and this one, particularly due to its “alone against the entire world” aspect. But where the two movies diverge, in my opinion, is in the importance they accord to movement. Let me explain: in many of the Dardenne Brothers’ films the main character’s conflict is resolved via the path he takes – such as in “Rosetta” or “The Kid with a Bike”. It reminds me of the basic myth of the “walking man” as shot by Etienne Jules Marey or Eadweard Muybridge, and I find this very moving.

It’s pretty rare in a Dardenne Brothers’ film, but “Two Days, One Night” is bursting with sunshine. There’s even an almost Western atmosphere in the last scene…

AM: The Brothers wanted a summer film. We shot for eleven weeks during the heart of the summer in 2013. The weather that summer was particularly hot for Belgium! You can feel it in the film, in the visuals, the costumes… such as the pink tank top worn by Marion for the whole first day of the story. You can see the sweat on their faces. The issue for me and the gaffer and the key grip was how to manage the very harsh sunlight. Although Marion never made any aesthetic demands regarding the film, I felt obliged, out of a sense of gallantry, to protect her face most of the time by showing the Brothers during screen tests that the sun could produce overly-harsh visuals. Most of the outdoor daytime shots became an uphill battle fought using diffusion frames, large silks, and camouflage nets (such as in the scene in the rear courtyard with the millstone) in order to allow us to shoot at any time, whilst maintaing relatively soft lighting on the faces. I would also like to acknowledge the amazing, precise work done by Amaury Duquesne, especially given that I chose to shoot most of the time at 4.5 in order to focus in on Marion against the landscape. This led to visuals radically different from those in “The Kid with a Bike”, where I had chosen a more “polaroid” sort of image with diaphragms ranging between 8 and 11. 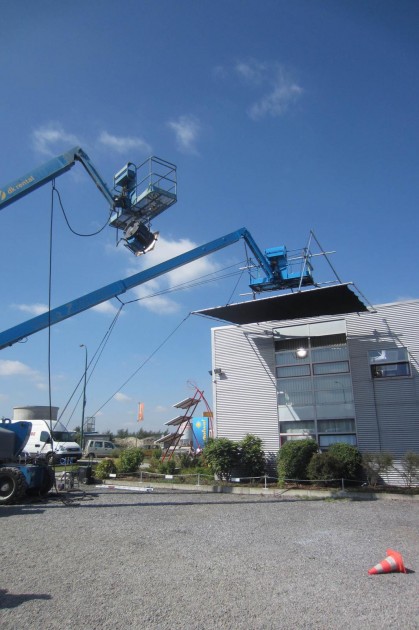 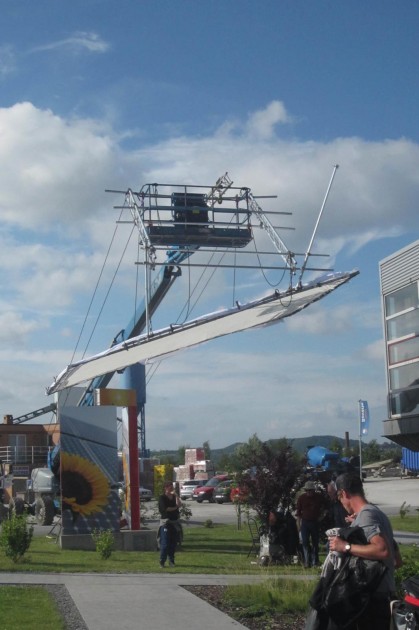 Didn’t you encounter difficulties due to the extreme difference in contrast?

AM: When following Marion walking in the street, I corrected the diaphragm during shooting. I have a remote control that enables me to do this – as was the case on “The Kid with a Bike” – and I do everything on the spot using only the naked eye, without a HF monitor, just using my cell.

The scene in the football stadium is vital. For the first time, one feels that there is once again a glimmer of hope. This is also the first time that the dialogue is filmed in widescreen rather than in a single shot… tell me about this very intense moment on screen.

It was a very emotional moment. And, as throughout the film, an exceptional performance from cameraman Benoit Delvaux. The set was very different from the one that comes just before. Marion’s character is always separated from the person she is speaking with by a vertical element in the décor, usually a doorframe. I think that it was in order to capitalize on the horizontality of the landscape that the Brothers decided on this panoramic shot.

It was complicated to light this scene, because we had to take into account both the movement of the actors, and fact that the sun was at its zenith as it was the middle of the day. Timur seemed very emotional at finding himself face to face with Marion, and the intensity of his reaction during the first takes was such that he had a hard time holding himself back from tears the minute he started saying his lines! We were all somewhere between bursting into laughter and tears… 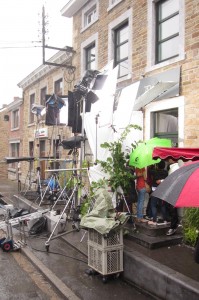 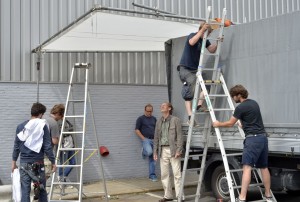 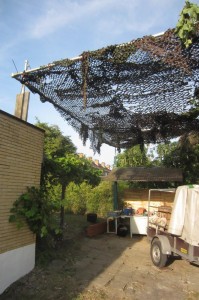 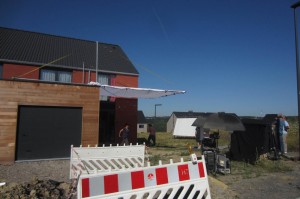 What about the daytime shots indoors?

AM: Same issue. In Marion’s flat, key grip Renaud Anciaux and gaffer Tanguy Delhez built 4 by 4 screens outside of the windows in order to protect them from direct sunlight, which allowed us to keep some details and design on the curtains, for example. We had to prevent the summer sun coming in and literally attacking the image.

Actually, I now realize that the entire film was practically about reducing light rather than adding it! It is a simple movie in a simple environment but with complicated means that one never encounters.

This is the first film shot in digital by the Dardenne Brothers. Did it change their

AM: Their method as such did not really change. On the other hand, it is true that certain scenes in the home, including very complicated master shots, such as the dinner with the children, wouldn’t have been possible with silver-process film stock. The autonomy of a digital camera allows for great flexibility in working with the actors, and enables one to film one shot after the other without having to pause in order to reload the film or check the window. As for the Brothers, who don’t appear to enjoy the technical side of the craft but who are actually proficient technicians, they felt freer in their staging and were able to pull off the shots they had in mind with almost no restriction. Somehow, they are always able to adapt their style to the equipment.

What configuration did you choose?

AM: Once the choice of digital had been approved, we quickly chose the Alexa M, whose body can be

disconnected from the recorder. As usual, the film was largely shot from the shoulder, or at arm’s length, as Benoit is fond of doing. It was mainly for this second configuration that the choice of the M was capital: the reduction in weight of the sensor and the lens makes working at arm’s length practically incomparable with the experience of doing the same thing with even a lightweight 35mm camera.

The choice of lenses was also based on the criteria of weight, and we filmed using the Zeiss super speed series which is one of the most compact available. 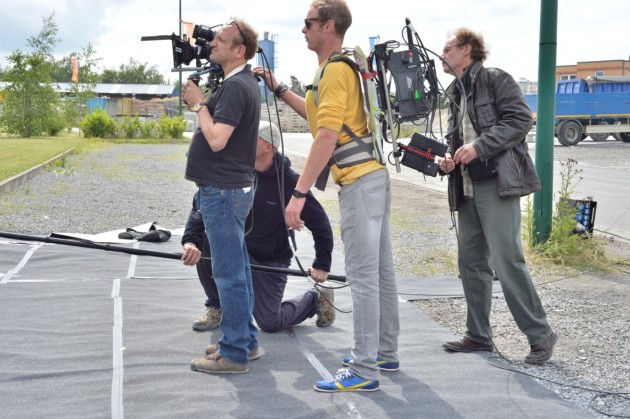 The car scenes are very realistic. I’m referring especially to the nighttime scene when Sandra and Manu go fetch Anne, who has just left her husband.

AM: In this scene, the Alexa M camera is set up on a slider at the rear of the car, and Benoit slipped himself into a very uncomfortable position in a corner in order to film. I am very proud of this moment, for all the light really seems to come from sodium motorway lighting out of the car windows. The challenge was to make sure the silhouettes still stood out, and especially to make sure that Christelle Cornil’s face could be read even though she was sitting in the back in the dark. For this I used fluorescent micro flo tubes hung on the ceiling of the cabin. This scene was only possible thanks to the Alexa’s great sensitivity (1.4 and one-half to 800 ASA), and I believe it would not have been shot in the same way if we had chosen to stick with 35 mm.

Another key scene is also a nighttime one, with Alphonse, the last person Sandra is to meet. It takes place in a launderette…

AM: We had scouted out the launderette very early on. We didn’t yet exactly know the script, and I was able to analyze each character’s position progressively as I rehearsed with the camera. As we know, it is not always easy to work on a shot containing extreme variations in skin tone… so I created a pathway of light using toplights to shed light on Serge Koto’s face. Black skin is beautiful, but it needs to be lit with very gentle softlights. The staging was meticulous and took into account the precise position of each actor during every line. No improvisation at all. 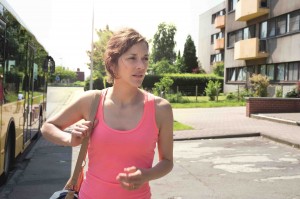 interview by François Reumont for the AFC.