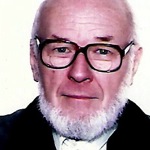 Today, thanks to a new system that was developed in Austria and that was baptized «Reflect Lighting System (RLS)», shooting with exclusive (or almost exclusive) reflected light has considerably been perfected. Nine feature films have done credit to this technique, one of which was Michael Haneke’s 2009 Cannes Palme d’Or Das Weiβe Band. (D.O.P. Christian Berger.)

During shooting, light is essential. It is capricious, demanding. Henri Alekan wants light to be “spread”. That means that you will need multiple light sources, reducing the angle of their beam to allow yourself to position them separately and to redirect them more accurately, with greater care and even greater precision on the actress or actor whose face has to be moulded into the character and the mood he or she had to convey.

That is why our sets are equipped with a multitude of spotlights of different strength and type. For each of them, the light is released and re-directed by means of cutters, flags, foils, gel etc. These traditional techniques have undoubtedly proven their worth, but they take a lot of set-up time. And, even worse, they consume huge quantities of electricity.

RLS lighting with one spotlight and three reflectors

At the end of the fifties, this technique was contested by the Nouvelle Vague filmmakers, who thought that only white ceilings and walls should reflect and diffuse an often unique light. The natural set – obviously the traditional set was also contested – looked much like an aquarium. The omnipresent light lit all the actors simultaneously in all angles, points of view and in all their movements… even improvised. Certain DOP’s, such as Raoul Coutard, AFC excelled in this approach and even managed to master it as a technique.

I am aware that certain colleagues may accuse me of making a caricature of this lighting method and forgetting that some may occasionally still be applying it today. And they are right, no doubt. But the deeper reasons for this practice are still the same as they were fifty years ago, and they were often more mercantile than artistic: «Shoot your film as quickly as possible, do not spend money on things you can possibly economize on and too bad if it has consequences for the photographic quality. If necessary… we’ll claim that this was a deliberately chosen style.»

THE SAGA OF THE INNOVATORS 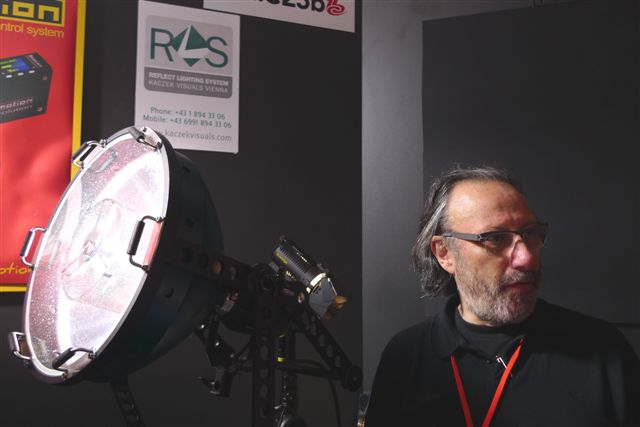 Frédéric-Gérard KACZEK, AAC is Belgian. He was born in Brussels and currently lives in Vienna. During the seventies and eighties there was little or no exciting work or challenge in Austria for a young D.O.P. So, like most of his colleagues, Frédéric went to look for an additional job that might suit his interest in cinematographic mechanics and his sense of pedagogy. In 1975, Fritz Gabriel BAUER, the famous inventor and engineer of the Moviecam, asked him to make a manual, containing a complete and detailed technical description of his camera. This work would be meant for camera operators, assistants and companies that offered rental and maintenance services of this type of material. This collaboration was ended by the end of 2002, when F-G BAUER’s MOVIECAM company became part of the ARRI Group. At that moment, Frédéric was called in to do the same job for the ARRICAM cameras and soon for other manufacturers such as PS-TECHNIK or CMOTION.

More or less at that same moment, Christian BERGER – an Austrian DOP who had worked for Austrian television, in documentary filmmaking but also in feature filmmaking, notably with Michael HANEKE – was experimenting with industrially manufactured aluminium foil selected on the basis of different coatings, a technique that bends the light and modulates it at the same time, making it harder or softer, concentrating or spreading it.

So, in 2003, Christian BERGER asked Frédéric-Gérard KACZEK to help him develop the system, the reflectors, the spotlights and the mounting mechanisms. Frédéric eagerly accepted the challenge, even though he had no clear idea where it would take him.

In February 2004, BERGER and KACZEK organized a demonstration at ARRI in London, showing how easy and fast it was and proving that it required only one light source to light various elements of the image with different effects, even on a large set, such as, for instance, a parking lot…

But by the end of 2008, BERGER suddenly decided, without any explanation, to end their collaborative relationship. As a matter of fact, several months before, KACZEK had found a lighting material manufacturer he had introduced to BERGER as a potential partner. This industrialist, after having constructed the spotlights that were used during shooting of Das Weiβe Band on the basis of Frédéric’s designs, decided to dismiss Frédéric suggesting that he wanted to continue the adventure with Berger only. 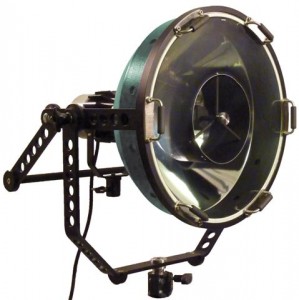 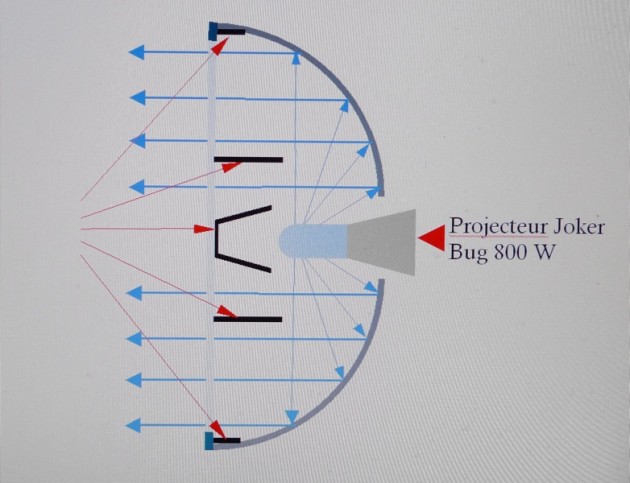 HOW TO MAKE DISCRETE LIGHTING SIMPLE

A light tubular structure, an aluminium boom (for instance a trilite or prolite) is mounted above the set or is placed in a dead corner of the set that has to be lit. At the tail end of the tubular structure, an 800 W HMI spotlight is mounted, equipped with a parabolic mirror with a diameter of 40 cm the parallel beam of which lights reflectors of different size and type mounted on the supporting structure to reflect the light onto the camera field, following the directions and effects chosen by the D.O.P.

The system currently works with HMI because the light is much more accurate than the light produced by the filaments of halogen lamps. When placed precisely in the focus of a parabolic mirror, this accurate light source produces an extremely powerful beam of parallel light. Another spotlight equipped with a 1200 W or 1800 W HMI lamp, which casts a beam with a diameter of 70 cm, has become available since January. Apart from its power, its main asset is the diameter of its parallel beam. The larger this beam, the more reflectors you can mount to re-direct it. Such power, however, would only be required for huge sets. As a matter of fact, even with a lamp of only 800 W, the concentration of the light beam will oblige the D.O.P’s to re-calculate the relation <light source power/distance of the lighting zone> and to adjust the diaphragm in comparison to the usual values in traditional lighting. 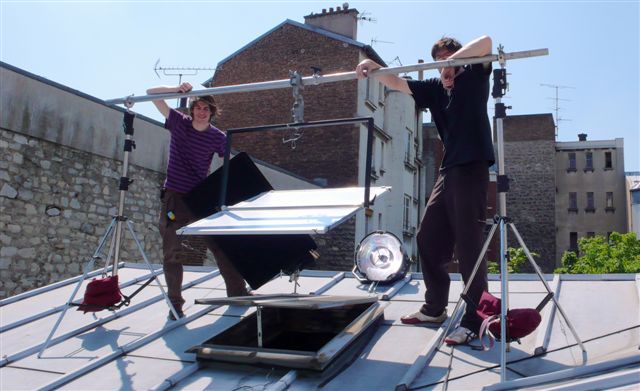 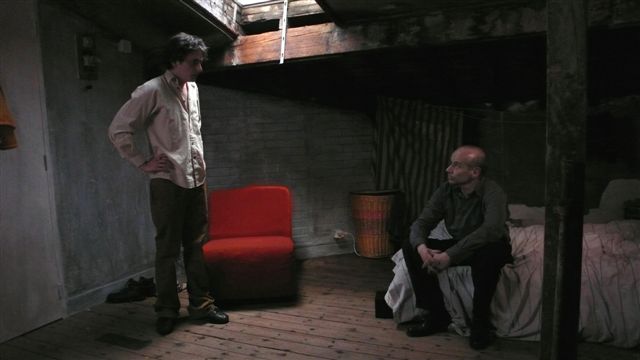 Frédéric-Gérard KACZEK developed an adapter mechanism that makes it possible to mount the parabolic mirror with the required precision around the spotlight lamp. An original mechanism allows the spotlight to be mounted on the floor, or on a boom or on a leg. Special care was given to the mounting of the reflectors – it was even patented, for instance for its use of magnetic attraction.

The research process of finding industries capable of manufacturing the reflectors and processing the surface and size has been long and toilsome. A new reflector, for instance, uses parallel grooves cut in the mass to cast a very narrow spot of light that stretches in any direction. The « silk » gel, well-known in cinema, deviates the light to obtain a similar effect, but without the possibility to make variations and only with a considerable loss of light.

After having digested his « misadventures » with Christian BERGER, Frédéric-Gérard KACZEK picked up the thread again and started his search for new furnishers of spotlights for his company KACZEK VISUALS. At French manufacturer K5600’s he found the Joker bug 800 spotlight that he equipped with a parabolic mirror, ending up constructing a specific mounting mechanism for the mirror that he had designed during the previous years. 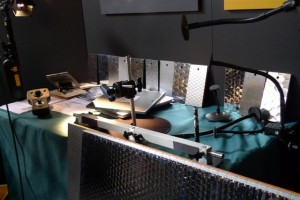 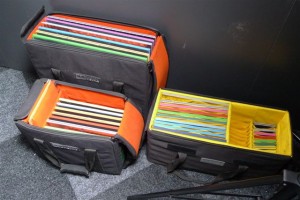 Kaczek Visuals exhibited its material, sometimes reduced to the bare necessities, at the 2006 Los Angeles CineGear Expo, at this year’s IBC in Amsterdam and at Satis in Paris to show visitors how it works. And that is only a beginning: demonstrations have already been given to leaseholders in Cologne, Hamburg and Paris, and during the CAMERIMAGE festival in Lodz (Poland). Brussels was scheduled January 8 and 9, to be followed by Amsterdam, Luxemburg, Munich and Berlin. In each visited city, a local representative takes charge of the locations, the maintenance of the equipment and its storage. This is not a utopian project: it is indispensable. It is a matter of furnishing and delivery of the aluminium foil that can only be negotiated per ton to keep the price acceptable. But an average shooting set for a feature-length film represents about 20 m² of reflectors, that is 27 kg or 1.350 kg per m². Today the stock is being established to cover the demand of the quoted cities at a first estimate of 5 to 15 kits per country.

For Frédéric-Gérard KACZEK, the adventure continues. His resolve that can be qualified as passionate, was born the day he realized that you have to be able to separate the light from itself to make it beautiful.

1 : The inventor of these devices was American DOP Ross Lowell. They were manufactured and distributed by his company LOWELL-LIGHT. In 1979 Lowell received a technical Academy Award for his creations. That same year, his film «Oh Brother, my Brother» was nominated for an Academy Award in the Best Short Fiction film category. He was also the author of the inspiring technical work «A Matter of Light & Depth». The company’s website address is www.lowel.com (one ‘l’ only!)

This article was published in the trade magazine AVIndustry (Nr. 125). We are grateful to MAGELAAN publishers and Dirk Rasschaert for authorizing us to publish the article on our website.