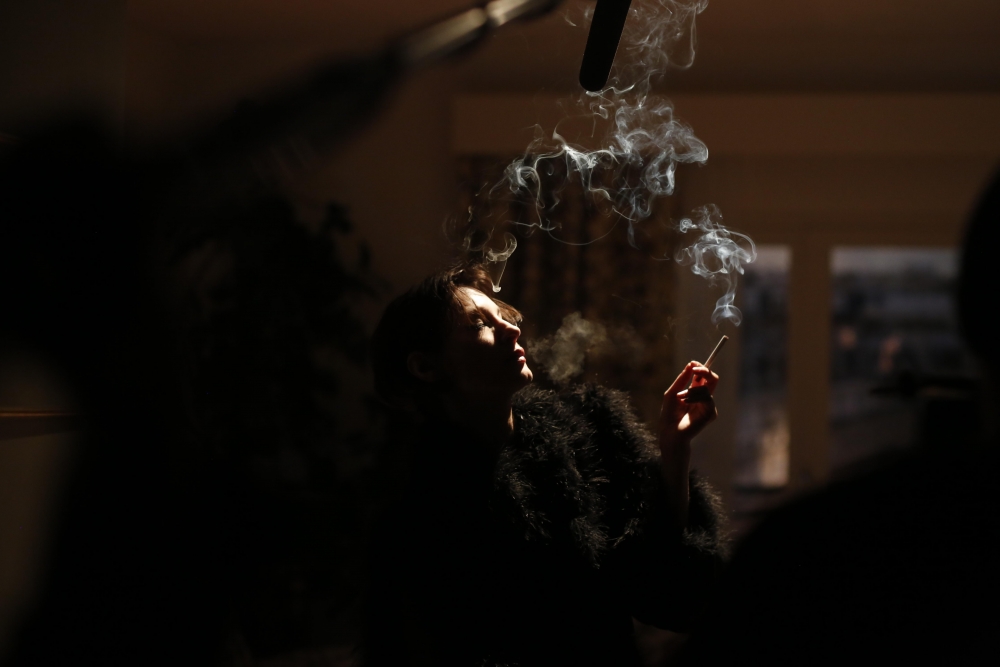 Barbara, which isn’t a biopic on “La Dame en noir”, releases in theaters for the twentieth anniversary of the singer’s death. Mathieu Almaric shoots his sixth long feature film and comes back on la Croisette, where he won the “Prix de la mise en scène” in 2010 for Tournée. Christophe Beaucarne, AFC, SBC, Almaric’s Director of Photography for all his films, signs a glamorous photography and tries to transcend the image of the mythical singer, played by Jeanne Balibar. Barbara opens the Un Certain Regard for this seventieth Festival de Cannes. (BB)

An actress is going to play Barbara, the shooting is going to start soon. She works on her character, the voice, the songs, the gestures. The scenes to learn are ok, it comes step by step, it grows, it does even invade her. The director works too, through his meetings, through the archives, the music ; he gets invaded like her, by her. 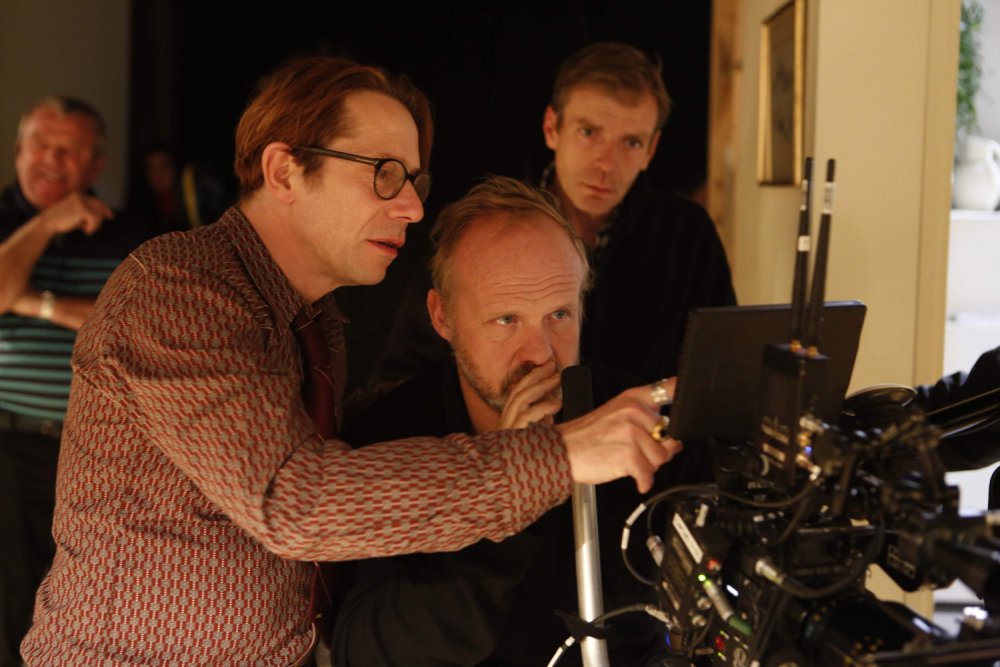 here are at least three levels of narration in Barbara, maybe even more…

C.B : Yes ! There is the movie in the movie. Yves (Mathieu Almaric) shoots a biopic on Barbara, played by Brigitte (Jeanne Balibar). There are some real archives of Barbara, and then the real Brigitte who isn’t Barbara anymore. Inside these three levels, we find different levels of reading linked to Brigitte’s state seen by Yves and at Yves’s state.

We shouldn’t try too hard to understand, he should just let us go…

C.B : That’s it ! It is when we let us go that we are more affected ! Mathieu Almaric created an hybrid object, it isn’t a biopic, it is a point of view, way more free than a biopic. In the same time, Barbara’s entitled person, who is also her nephew and who plays in the movie, gave an incredible amount of informations to Mathieu, who became a real specialist of Barbara’s life. All the details in the movie, from the ad on the wall in front of her room in Brussels to her love story with her prop master.

Your choices try to match with the three narrations, could you tell us more about the movie in the movie …

C.B : I chose to light the movie in the movie in a fictional but still old-fashioned way, with backlights and dark zones. With Mathieu, we wanted to have a light unit between the apartment in Rémusat where Brigitte interprets Barbara and when Brigitte is in her real life, so that the identification with Barbara is felt both in the movie that Yves is shooting and in her life as an actress. The old fashion lighting was also used in the hotel and in the studio. That style, not totally realistic and not contemporary at all, looks like the images of the Barbara years. 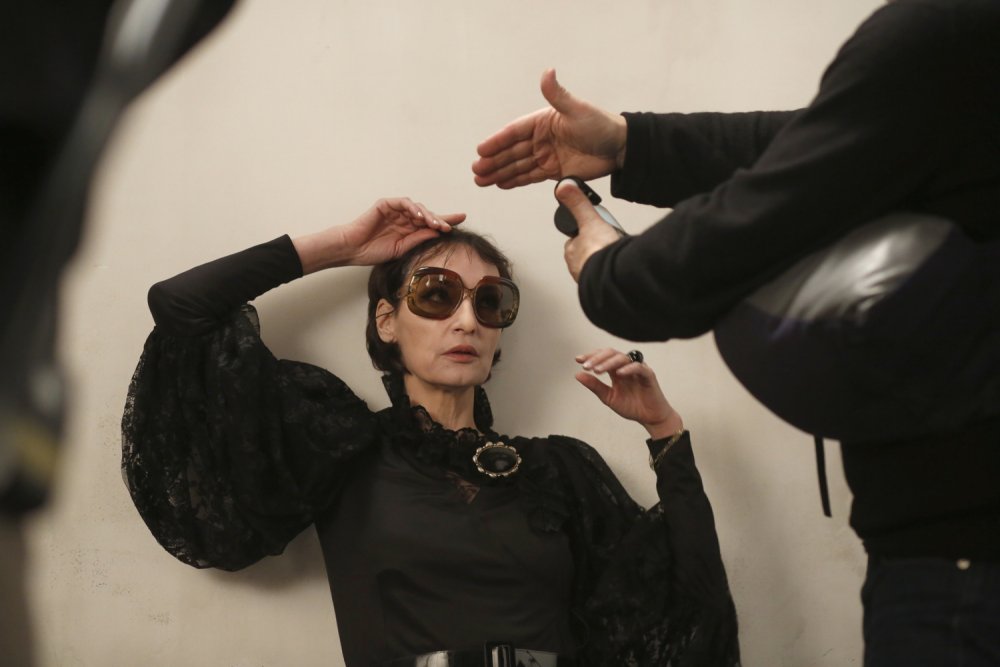 Why did you choose to shoot some of the scenes with 16mm film ?

C.B : We had the real archive images of Barbara and we mixed them with some “fake” ones that we shot in 16mm. These images were more detailed than the archive ones, which were reversal films, moreover, scanned reversal. During the prep time, I tried to color grade my images to match with the ones of the archives. We did it pretty good but in the end, we thought with Mathieu that it wasn’t the right decision. We needed the images to have a fictional aspect, not a documentary style. Yves, the director, is obsessed with Barbara, he sees the real Barbara, they are his mental images, so it was more interesting to keep a little difference. We shot all the concerts scenes and the scenes that were linked with the movie in the movie with 16mm film.

And the rest was shot digitally… that you matched with the 16mm ?

C.B : Yes, it was shot on a RED camera. I actually added some grain, scanned 16mm grain ! At the beginning of the movie, I only added a little bit of it, and then I increased it to the scene of the car- where she knits – and the installation in the theater where the grain is hard. And then I got back down gradually to the end where it almost disappeared, when we are in Barbara’s house.

So you played with both techniques, digital and film, which I guess is not easy…

C.B : The thing is that, when shooting digitally, I never use direct light. I was kind of worried about using backlit lighting and keeping some dark zones. Talking about the 16mm film part, it was stressful too ! I admit that even after 25 feature films shot with 35mm film, my eye wasn’t used to film anymore, the shot always seemed too bright or too dark to me. But I remembered pretty well how to expose and I trusted my lightmeter, even without key-light tests. It is incredible to feel that we are the only one mastering it again, because nobody really knows what you are doing. I am not talking about any kind of power, but it is a totally different link to the others.And I also found back the magical aspect of waiting for the process, watching the dailies… It gets the image more glamorous ! This is the reason why, at the beginning, we wanted to shoot everything with 16mm film, for that incredible aspect of the skin, or the reds, that are beautiful and don’t look fake. For the car scenes too, when the sun is in the frame, it doesn’t have anything to do with digital, it is pretty. We use to say that digital means freedom, but I think that we have more freedom with film.

Were the concert scenes shot on the stages of that time ?

C.B : All the scenes that were supposed to happen in different places were actually shot at the same spot. I would modify my lighting with different colors and we would change the curtain of the stage. For the Olympia, the stage where she says goodbye, the lights were really strong and colorful, like in that time.

There is a beautiful succession between two narrations, which brings us to the end of the movie. An ending that is quite different from the rest by the way, the image is more realistic.

C.B : In the last song that she plays, Brigitte is in playback with Barbara’s voice. We turn around the piano, it is a tracking shot combined with a zoom in and I go from the cold and directional lighting to a well-thought lighting. Brigitte’s change of state to Jeanne, the one who doesn’t identify to Barbara anymore is completely faded with the following scene, in Barbara’s house, with a realistic lighting. I shot without any lights, using the real light as it was, with the sun that was coming in. And there, we are in Barbara’s house, at the end of her life, we are not in Yves’s film anymore but in a biopic on Barbara interpreted by Jeanne Balibar.

Interview conducted by Brigitte Barbieron behalf of the AFC, and translated from French by  Gaston Struye

Courtesy of the AFC