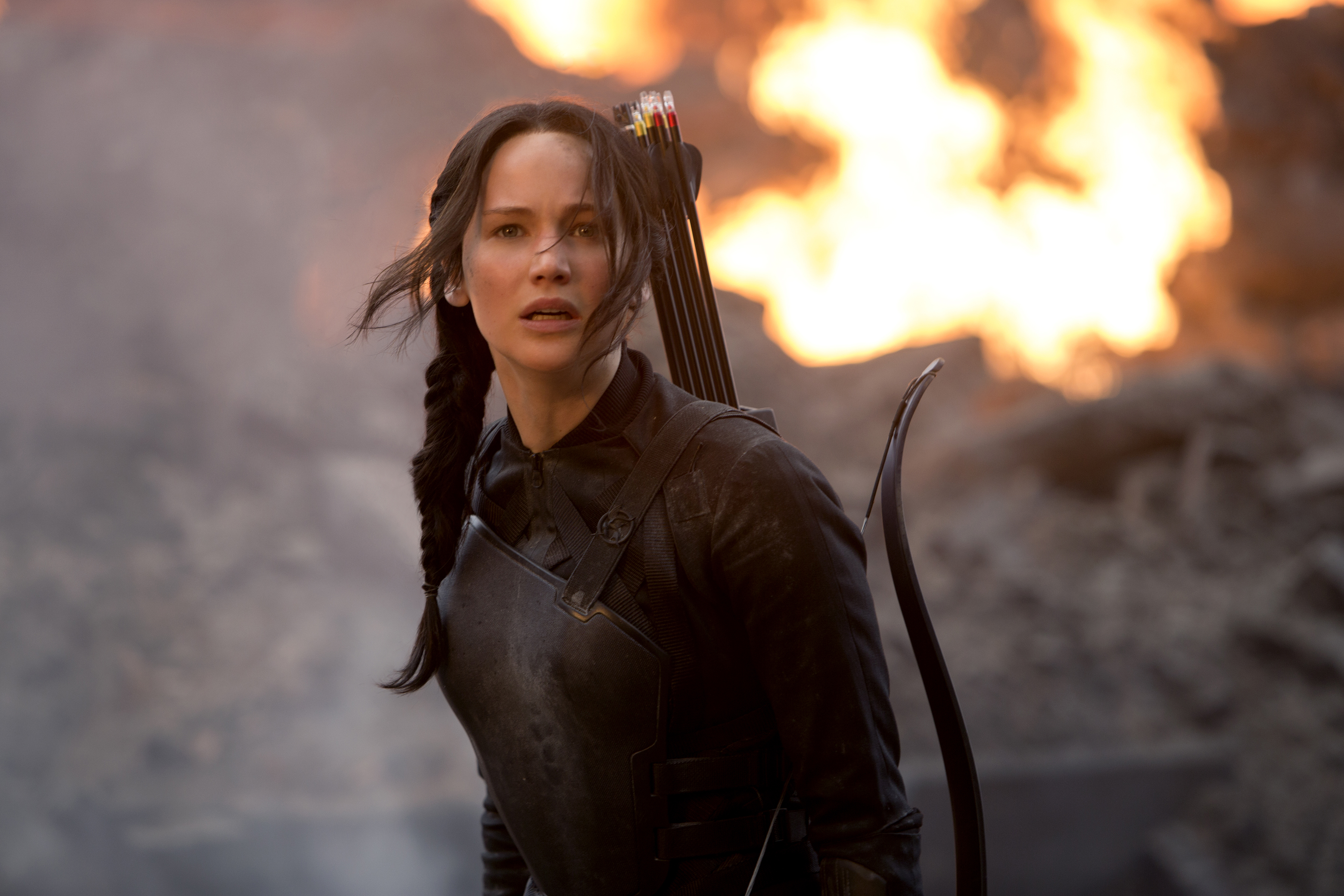 The Hunger Games franchise is a worldwide box office phenomenon, with legitimate critical praise to go along with record-breaking receipts. Translating the vision of author Suzanne Collins to the screen began in North Carolina in 2011, with Gary Ross serving as director and Tom Stern, ASC, AFC at the camera. For the three subsequent installments, the director was Francis Lawrence (I am Legend, Water for Elephants, Constantine) and the cinematographer was Jo Willems, SBC.
Willems is a native of Belgium and a graduate of the London International Film School whose career shifted into overdrive with the Hunger Games assignment. His stylish work on hundreds of music videos and high end commercials no doubt helped, as did two previous narrative television projects with Lawrence: the pilots for Gotham and Touch. The duo had also done music videos together in the early 2000s. 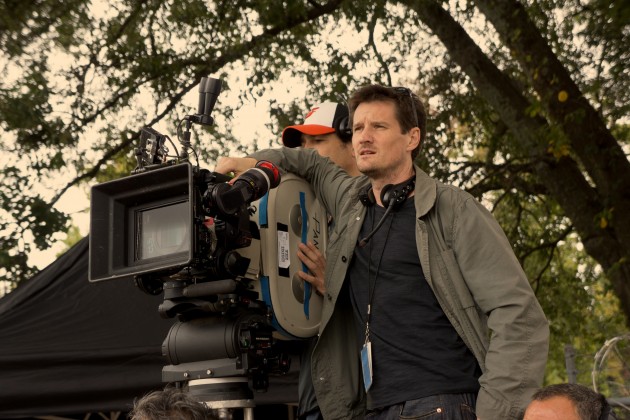 Willems says that their highest priority for The Hunger Games: Catching Fire was to tell the story from a human perspective.
“To me, these films are like Ken Loach for the masses,” he says. “They’re about people standing up for themselves against a totalitarian regime. I wanted images without artifice, nothing too modern or present, but still beautiful. We kept a real simplicity in the lighting and the camera work. I felt that the more real I could make it, the better the audience would be carried through the story. If you make things too perfect, the audience gets uneasy. Audiences have responded very well to this series of films, and I think it’s because there’s a very human aspect to them. In a way, the film is a character piece. We tried to keep the filmmaking very human, so you feel empathy, and you can transport yourself into the reality of their world – even though it’s sci-fi and set in the future.”
The medium for the majority of Catching Fire was anamorphic 35 mm film, which was chosen in part to avoid imagery that felt too “clinical.”
The Catching Fire story revolves around the competition in which teenagers fight to the death. To intensify these scenes, Willems and Lawrence chose to shoot in the 1.43:1 IMAX format, which uses 65 mm film and a horizontal frame that is almost ten times the area of a conventional 35 mm film frame. The IMAX scenes were generally done on the 250D 5207, and like the 35 mm scenes, were often handheld.
“The conventional wisdom is that you have to shoot a little wider in IMAX,” says Willem. “People say that it’s a big landscape format. But Francis kept urging us to move in closer. In the end, he was right. Those shots look great. To me, it’s incredible when you look at people’s faces when you’re in that full close-up. You can feel every bead of sweat. You get so close to these characters, so intimate that you can really sense them.”
Shooting night for night in the Hawaiian jungle was deemed inefficient. Instead, Willems shot day-for-night, which allowed him to minimize artificial “movie light,” while shaving weeks from the schedule.
“I wanted to have softer moonlight look, which would have been hard to achieve in dense jungle because there’s no space to hang large soft boxes off cranes,” he says. “The light cannot get through the canopy. By shooting day-for-night, we can see deep into the jungle, and we didn’t have to light the entire jungle to accomplish that. It fit in with our shooting ethos: fast, not inhibited by too much equipment, and flexible.”
The Hunger Games: Catching Fire was a smash. Willems and Lawrence reunited for the Mockingjay chapters, shot consecutively over 154 days. But this time, they opted for ARRI ALEXA and digital capture. The glass was still older C-series Panavision anamorphics for the most part. The decision to go digital was in part based on the fact that the main story moved into an underground realm distinct from the environments seen in the first two films.
“The script included many very dark interiors,” says Willems. “We wanted to continue the naturalistic way of working. We wanted to use a lot of LED lighting, with full ceilings on a lot of the sets, and we wanted the characters to walk around these sets in 360 degree shots. We shot in sewer lines lit with just flashlights. With digital, we didn’t have to worry about the lab or shipping, and I could do all the coloring on set. It was really quite liberating, and I enjoyed it.”
Willems describes the color palette of the underground world as “warm, rusty, sodium vapor, desaturated.” Production design placed extensive practical lighting into the set.
“We tried to keep it bleak and slightly miserable,” he says. “We also played with a warmer night look and a more neutral day look, even though it’s all underground.”
Willems was able to bring his camera crew and some keys with him throughout. A camera/Steadicam operator David J. Thompson is a crucial player, having done five movies with Willems as well as I am Legend with Lawrence. Ninety percent of the movie was done handheld, giving the actors the freedom to move. 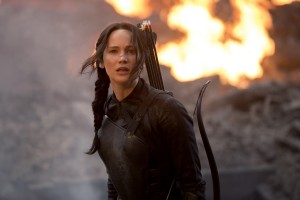 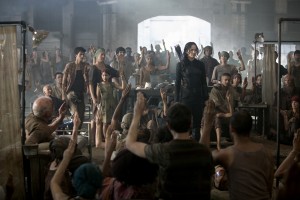 Cinematographers work under tremendous pressure, at the intersection of the artistic, technical and financial aspects of filmmaking. Willems says that the stress of taking on a huge assignment like The Hunger Games films was eased by his strong relationship with Lawrence.
“It’s daunting, but it’s the kind of project you work towards for a long time,” he says. “Francis is just a fantastic director. He knows what he wants, and the entire undertaking is very well prepared. I’d never done something on that scale, but the way we shot these movies – in a handheld, naturalistic way – feels the same. There aren’t 14 cameras running. Sure, you go from 20 extras to 1,000. But you’re still dissecting what’s in front of you, and what’s in the frame. What are we trying to achieve with this shot? You use your brain and your instincts and do what you’ve always done.
“I would say it’s a much bigger step for a production designer to go from a small movie to suddenly doing like something like Hunger Games or a Marvel movie,” says Willems. “Of course the lighting set ups can be big, but so much of that is in the prep. To me, it felt like a natural progression.”
Asked how his approach has changed over the course of his career, Willems talks about being less precious.
“I’ve learned to have confidence in telling the story,” he says. “Forcing a look or a style onto something can be detrimental. Giving the director the freedom to work in a fluid way can be more important. You still have to make it look good. But you have to make sure your vision doesn’t stand in the way of making a good movie. Sometimes a flaw helps keep things from becoming too sterile. You can’t make a movie in a straitjacket – it has to breathe. The way the actors move in an environment sometimes takes priority. Ironically, maybe the biggest change in cinematography is the ability to use technology to make moviemaking less of a technology-driven process.”
Willems takes inspiration from his fellow Belgian filmmakers the Dardenne Brothers. But that doesn’t mean he mimics or copies their imagery.
“It’s more about how they approach filmmaking,” he says. “It’s honest, truthful and simple. I wanted to bring some of their philosophy to a blockbuster franchise. Once the artifice and gloss creep in, you don’t believe the story anymore. The Hunger Games films are shot from a human perspective. They’re very different from a Dardenne movie, but we were never extravagant in our approach, and our goal was honesty. If I could make the audience believe in the heroine, I think I achieved what I wanted to achieve.” 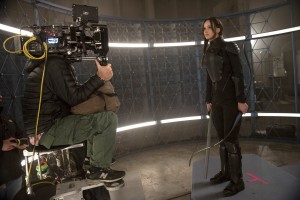 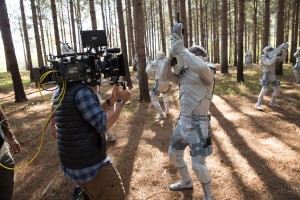 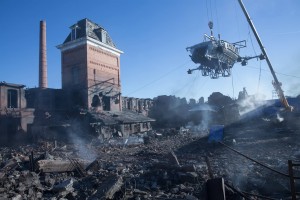