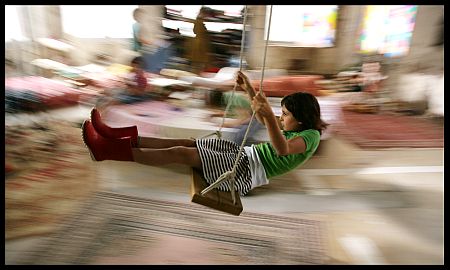 Moved from Belgium to the chaos of a 1974 Amsterdam artists’ commune, a 10-year-old witnesses the disintegration of her parents’ marriage in compelling coming-of-ager “My Queen Karo,” from Flemish director Dorothee van den Berghe. Although the title character ultimately sees that principles don’t pay the bills and “free love” exacts a high price, the helmer refrains from making moral judgments. Instead, her assured visuals remain focused on Karo, torn between feelings for her mother and loyalty toward her idealistic father. Set for October release in Belgium, pic should play European arthouses and TV; offshore, fests and cinematheques look most welcoming.

Precocious Karo (Anna Franziska Jager) and her parents, beautiful Dalia (Deborah Francois, “L’enfant”) and charismatic Raven (hunky Matthias Schoenaerts), arrive at the squalid Amsterdam squat they share with other Belgian artist-revolutionaries as a tight family unit, but that soon changes. Rejoicing that “now we can live as we please,” Raven declares a utopian society of no walls and no rules.

When Raven extends his credo to include “love as we please,” and invites Dutchwoman Alice (Maria Kraakman) and her two children to stay, neither Dalia nor Karo is prepared for the repercussions; the scenes of nude adults (sometimes in sexual situations) and nude children sharing a bed will likely be too much for American broadcasters.

Long accustomed to being the center of her parents’ universe, Karo becomes an unhappy outsider, observing the commune’s tense emotional undercurrents from her indoor swing and retreating to a corner, hands over ears, when things get ugly. Her whispered conversations with a pet hedgehog reveal how much the unstable situation affects her.

Needing attention and instinctively seeking some boundaries, Karo befriends downstairs neighbor Jacky (Rifka Lodeizen), a former swimming champion who believes in discipline and willpower and pays for Karo to take swimming lessons. Although Karo ultimately earns her diploma in water rescue, there’s nothing she can do to revive her parents’ relationship.

The strong, well-paced script excels at depicting a youngster’s perspective on the confusing, highly sexualized world of adults. It also reps semiautobiographical material for co-writer van den Berghe (“Girl”), who was born in Ghent but spent most of her childhood in Amsterdam.