When 40-year-old Alex pays a surprise visit to her parents, she discovers her mother has vanished like a thief in the night. Alex’s father, who is suffering from dementia, cannot or will not tell his daughter why. After moving back into the family home, Alex discovers, bit by bit, that her mother ran off because of a painful event from the past. The secret that father and daughter have kept safe for over 30 years now threatens to turn Alex’s own marriage upside down.

Anton Mertens: I’ve been working with the directors Kaat & Nathalie for a long time now, we previously had done the tv series Hotel Beau Séjour and Clan together. But this was our first feature film working together. They had given me a script many months in advance so we had plenty of time to discuss how we wanted it to play.

And they directed the film as a duo? How does that work?

AM: Yes they did, on previous projects they alternated days but on this one they were both present on set at the same time all the time. As we and many others of the crew had worked together so many times before this was just a continuation of our process. They are very loyal to their core crew using the same people every time like their AD Sabrina Haazen, sound recordist Stijn Jacobs and script Soetkin Vansummere.  It creates a kind of familiar feeling on set which helps when you have to move fast. We only had 25 days to shoot this film. And them being a duo helped as well, as they could divide their attention to different aspects of the scene, having an extra pair of eyes. Also they had written the script with Nathalie Broods as the lead in mind, so as far as the performances went they were pretty clear on what they were after.

What look were you after?

AM: They wanted the film to be stylized, to have an up scale feeling.  As it is a story about people hiding the truth from each other and themselves, we wanted the world inhabited by our characters also to be a facade, not to reveal the true nature of their relationships to quickly by putting them in a mundane environment.

We had looked at reference material by street photographers Harry Gruyaert and Saul Leither , for their use of hiding their subjects behind reflections and the use of late afternoon light. Indian summer was the color vibe we were going for, which was well translated in the autumn colours of the costume design by Catherine Marchand.

And in main location of the film, Jean’s house, as well?

AM:  Right. Scouting for another project our director Kaat had found this wonderful house build in the 70s that had not been changed in any way since it had been build. The furniture in it was still of that period, as were the carpets, the wallpaper, the bed linnen etc. And the great thing about that was that all the colours were in perfect harmony, so very little work was needed by the art department to create the look we were looking for.

The downside was that the house was build on a slope, surrounded on one side by water. So acces to light it was very limited. For this reason they did not use the house on Kaat’s previous project. But she really wanted it to work this time, and rightfully so as it had so much production value to offer for our film. During prep we had set up our production office in the house, in order to make our shot lists on site. The added advantage was that I could observe how the sunlight moved through the spaces. This gave me the confidence to go for a more natural approach, relying more on scheduling scenes at the right time of day than bringing in to many lights. The wonderful thing was that in designing the house the architect had already taken into account the sun path, which offered this beautiful late afternoon light in the main living room. As we had the perfect indian summer during the shoot, I merely had to bring in some negative fill or create some more direction using Arri L7 LED’s or BR T8 light banks custom build by our gaffer Bert Reyskens. He also carried some custom build LED strips in a plastic housing of different lengths of up to 2 meters. They were very handy to stick to the ceiling without taking up to much space or weight, as it was a very low wooden ceiling keeping equipment out of shot not so easy. The night scenes were mostly done using practicals aided by the LED strips or grouping a couple of single T8 tubes through some grid cloth fixed to the ceiling.

Another striking location was the beach house.

AM: This we went to shoot on the Opal coast in France. As these scenes are presented as scenes of another film that our main character Alex is watching,  we wanted them to play in a different environment. Originally Kaat & Nathalie wanted to shoot this on the French Riviera, but our limited budget would not allow this to happen. So we went for a more rugged look, and this beach with its strange rocks provided the perfect setting for a mother left by behind while her son goes to war. The house and the beach had a timeless feeling to it, even though it is contemporary it could have been during woII as well. In post the vfx crew of Ace took out the surrounding buildings to give the place an even more deserted feeling.

The film is set in different time periods, did you go for different looks?

AM: Not that much, I did not want to make it too much of a patchwork of styles. I figured that the different pieces of the film would be self evident as the settings are so different like for example the parking garage in the 70s flashbacks  which had very little colour and lots of grey tones.  These scenes were shot handheld as we were shooting with a very young actress who had to play some difficult emotions, and we did not want to pin her down so I followed her playing out entire scenes in one go, which were later cut up in the edit.  In contrary to that the present day scenes were all done using a dolly and tracks, doing subtile moves following the action. We shot in some small rooms so we could not do any grand movement any way. And as this is a film that drives on the performances one does not want to overpower that with the imagery. I made some exceptions to this when we wanted to reinforce the alzheimer attacks by framing Jean in a weirder way by shortsighting the frame and putting him the corner of the frame by taking a more higher and above the eye line angle on a 32mm or 25mm lens.

I shot the entire film on Cooke speed panchros, for their softer look mostly using the 32mm, as this puts a character in its environment without being to wide angle or to soft focus in the background. As we had put a lot of effort in finding some good looking locations I did not want to obscure them to much. One exception was the supermarket, as it was hard to find a good looking one that fitted in with the rest of the sets, I opted to shoot this scene on longer lenses like the 50 and 75.  Just to calm down the background as it was very noisy. We also altered the colour of some walls in post as they did not fit our palette and we could not repaint them on the site as it was the brand colour of those supermarkets.

I shot the entire film using one custom LUT in the camera which we carried over to the post production. During prep I shot some tests  on location to see how the LUT reacted to our sets and the different times of day. The advantage of doing this was that the grader Tom Mulder was able to finish the film in 5 days as the look was already established during the shoot and he just needed to even out differences from shot to shot. I find that if I threat a LUT as a film stock and don’t alter it by using on set grading, my eyes quickly adapt to its characteristics so I can quickly take decisions on set about my desired contrast ratios or colour contrast. The added advantage was that as I could only spent half a day working with Tom, I was shooting abroad during the post, that we did not have to spent that limited amount of time on searching the base look.

Any difficult shots you had pull off?

AM: Well we wanted to do a shot of Jean looking in the bathroom mirror while his reflection slowly disappears because of the fogging up of the mirror, as if his memorie is fading away. So the art department came up with the idea of putting bags filled with ice behind the mirror and warming up the room with heathers. But we were never able to get the timing right in one go. So after a few takes we decided that Johan Leysen would just wipe across the mirror with his hand, so a part of his face became visible. It ended up being a great shot mostly because of Johan’s superb performance playing a man who is slowly becoming childish.

AM: I really enjoyed filming this, there was a nice cameradery on set trying to make meaningful film on a tight budget. Sadly this has become a reality that films targeted at a more mature audience have hard time finding funding and distribution. But overall I am happy with the result, my aim was to create imagery in a minimalistic fashion, not to be overpowering but that still have its own look to it. And from what I gather from the reactions I get we succeeded in doing this. 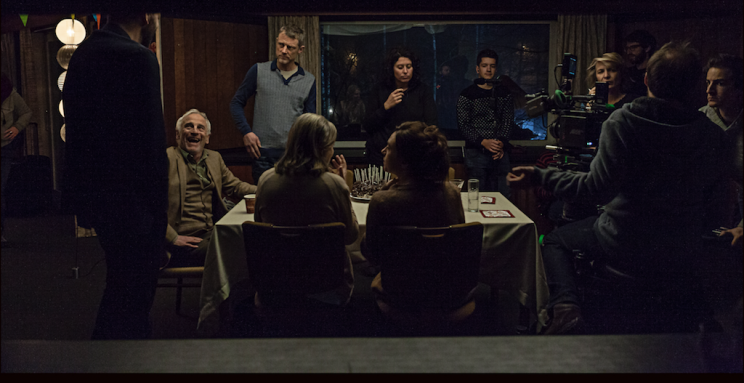