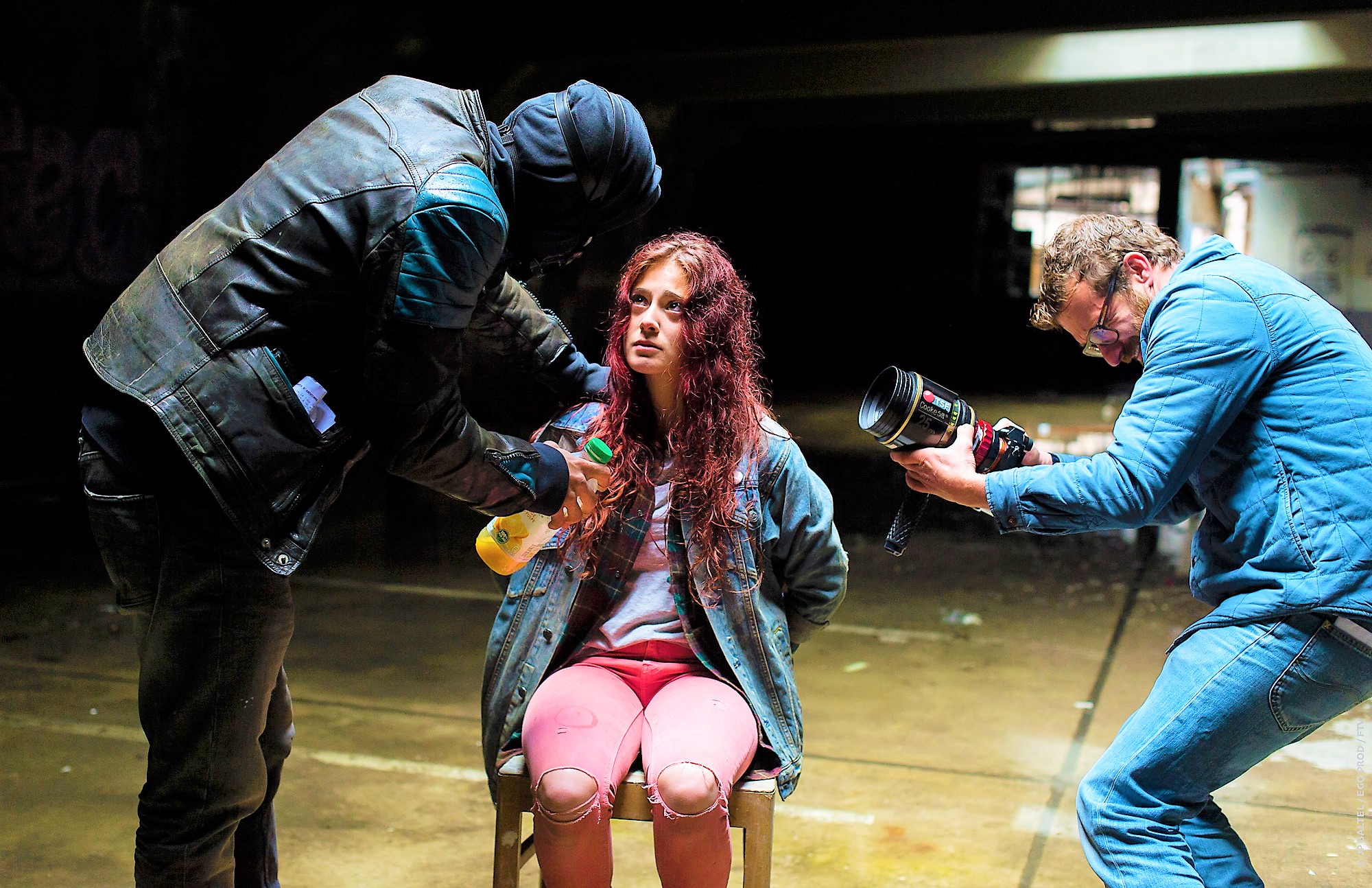 We are in Antwerp, the dynamic city and the place where international exchanges happen. La Peruche is a typical bar-café where Brazilian music covers up the discussions.

And this is the place where the meeting happens: a pensioned director who loves the technical aspect, the new technologies, … and a DOP, Christophe Nuyens, image creator and SBC member since 2014, well-known in Europe for the quality of the TV-shows he has shot. An old “crocodile” in the middle of the young talented cinematographers.

Nothing is better than the inside of a car to avoid the noises of the bar-café.

Who gave you the taste for images ?

CN : My Grand-father used to take pictures, shoot some super 8 film and video. He gave me the desire to create images when I was very young. He also used to show me a lot of movies on the TV. He recorded them and we would then watch the movies together. He was also taking me to the movie theater. He probably was one of the elements of what would later become a passion.

What did you study ?

CN : I first studied electricity in a technical school. I wanted to become an electrician and I didn’t know that cinema could suit me. After that, I still wanted to study, I wasn’t ready to work yet. I discovered the RITCS and immediately got some long lasting friendships. At first, I wanted to follow the Editing class, but after some hesitations, I chose Photography. I can’t remain seated for more than two hours, I have to move, and I also like to work with my hands and to have a crew around me.

At the RITCS, I met a director fellow, Jakob Verbruggen, with whom I collaborated for the short “SNPASHOT” who won a price in 2002 in Gent. He was really born in the cinema industry and was inspired by the American movies. He is currently working in GB and in the USA.

My best memory at the RITCS is when I met with the excellent DOP Walter Van den Ende, who organized workshops dedicated to the image. These workshops lasted for one week or two and we learned more than in one year of lessons. Walter taught us how to look at an image, he showed us paintings and he asked us to recreate them in photographs. When I prep for a shooting nowadays, I still use what I learned during the workshops. On my own or with the director, I create a sort of visual diagram with diverse pictures and I try to imagine what the global look of the film is going to be. I choose an image and I build the scene in function of it, my focal length, the lighting, …

All this was brought to me by Walter. Film analysis was also taught by other teachers, but at the time, I didn’t find them really interesting.

Since then, everything has changed. It was love at the first sight when I watched the American movie “The Revenant”. Even if the script wasn’t amazing, the images were stunning. I read a lot concerning the making of the technical aspect and it influenced my cinematography. For example when I work with an 18mm for a close up. 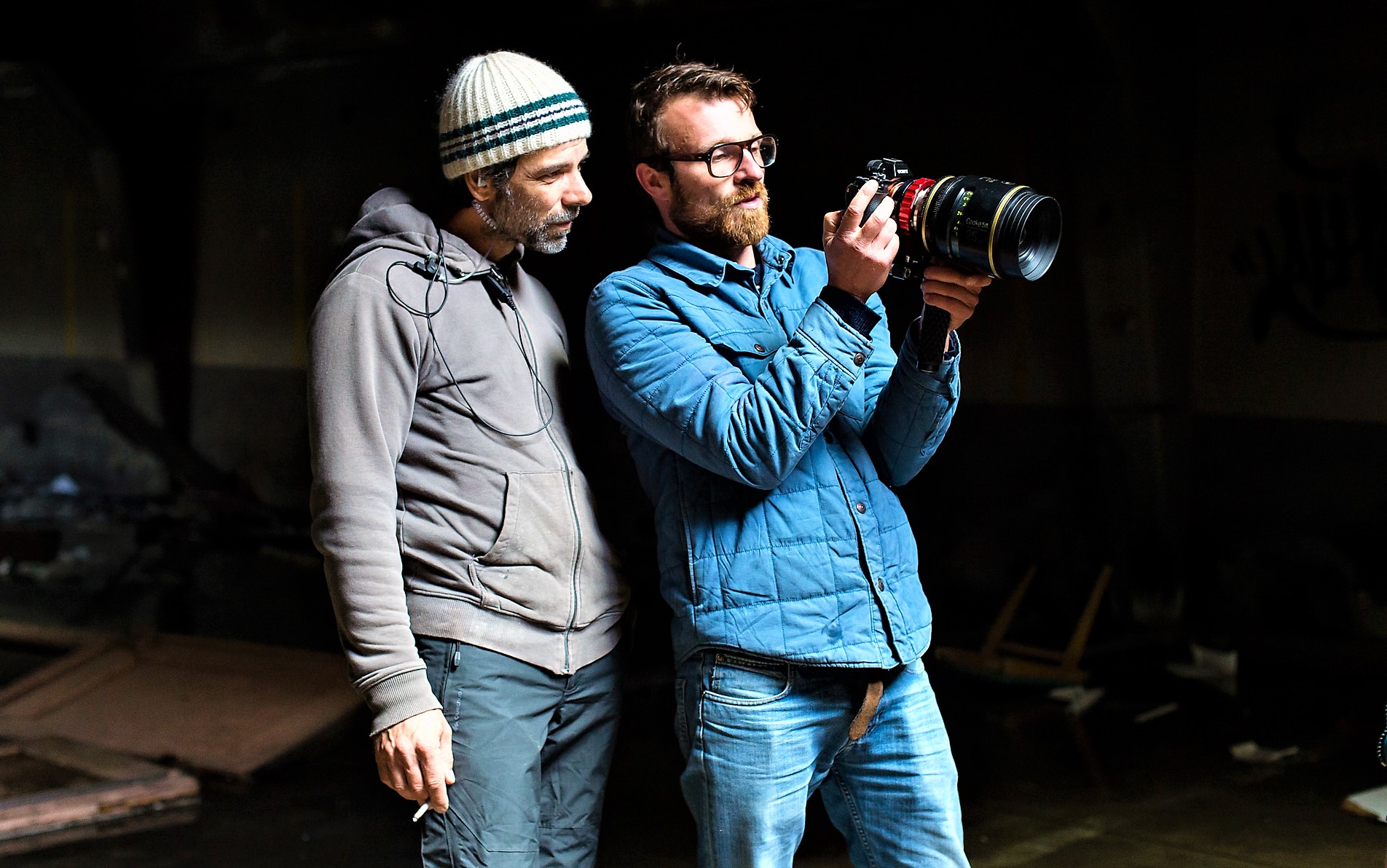 What did you use camera and lighting-wise for the shooting of Zone Blanche ?

CN : I used the Arri Alexa Mini’s. For the shots that we had to make, we had to use a small and lightweight camera bodies such as the Mini, mounted on a stabilized head or along a cable. It allowed me to frame in small spaces such as caves, which would be impossible with bigger cameras. 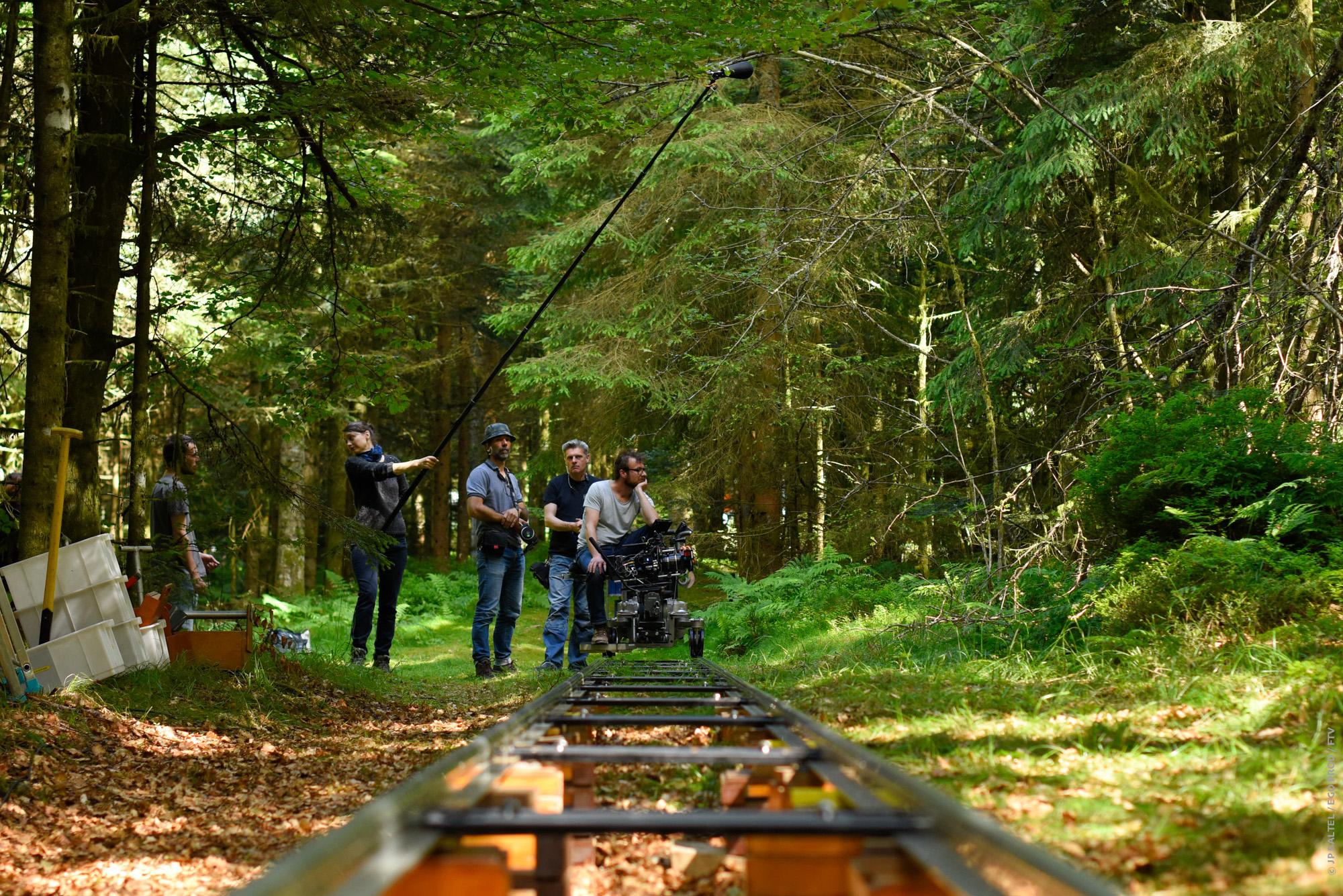 I don’t use any zooms, I don’t like them. I like to use Prime lenses such as the Cooke 18mm/25mm/35mm. The use of fixed focal length asks for more reflexion. In that lens kit, I used the 18mm a lot to shoot the close up’s, it allowed me to stand close to the actors, which would have been impossible with a zoom lens.

When shooting on film, we used to conduce a lot of prep and tryout’s for the quality of the lenses we used. In the digital era, the lighting and the color grading are the important parameters. The final look of the image is fundamental. I like to give the same image to everyone on set, would it be the director of the set decorator. Every monitor on set delivers the same image.

YOUR WORK ON THE LIGHTING

CN : “Zone Blanche” is a series of 8 episodes (52′) happening in the Vosges’ landscapes, filled with woods and hills, where the sun sets early, which gives interesting images that go along with the script. The directors and the writer wanted to make a series of atmosphere, almost a dark series.

My work on the lighting was about looking for a photographical style that would fit with the landscapes, the locations and the characters. I mixed cold and warm sources on set to create a contrasted image.

We worked together with the director, the set decorator, and all the members of the crew. Before we started shooting, we worked on the locations and the colors. We had a whole day of reunion to talk about the use of colors. I had my reference pictures and under each of them, was a color chart. We decided, for example, to exclude the yellow from all the elements.

On set, I like to feel the things and look after solutions. When we rehearse with the actors, I use a Viewfinder. I like to take pictures and to show them to the director. Then, we decide to set up three or four shots precisely. The gaffer is of course part of the discussion. I really like to use natural light and natural elements of the set to light up a scene. I also like to mix a cold light with some warmer visual points, or inversely. For the main sets, we used a ceiling made up with neon tubes. The choice of the right axis is the key! I also used some really soft sources.

When the base of the light is installed, the small adjustments with my gaffer are pretty quick, as everything is wirelessly controlled by DMX.

We try diverse solutions to match images and story through intuitive work and the search for an organic image. 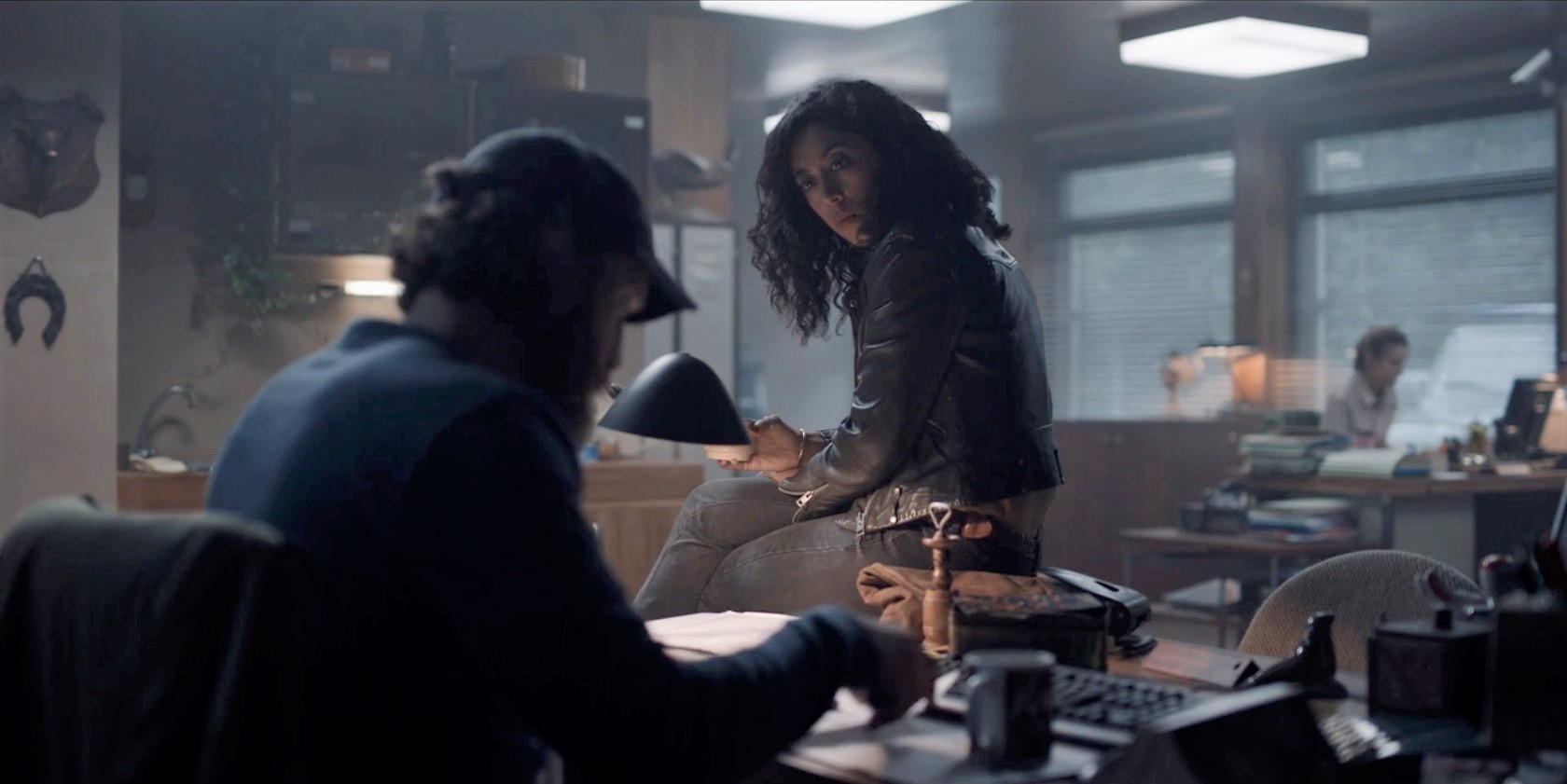 It was really important for us to find a strange, mysterious, cold, sometimes suffocating universe. The woods, which are the main character, engulfs the whole community living in that small town. I think that the challenge was succeeded. I collaborated on the project for the first four episodes, and then let my colleague Bruno Degraeve finish it. I really like to work on a series for a few episodes and then transfer my experience to others. Sometimes, I also get on a project that has already started, and I enjoy learning things from another DOP. To me, it seems like a good way of working, for the DOP’s and the directors. New talents can then get discovered. Anyways, six or seven months on the same project is too long for someone like me. 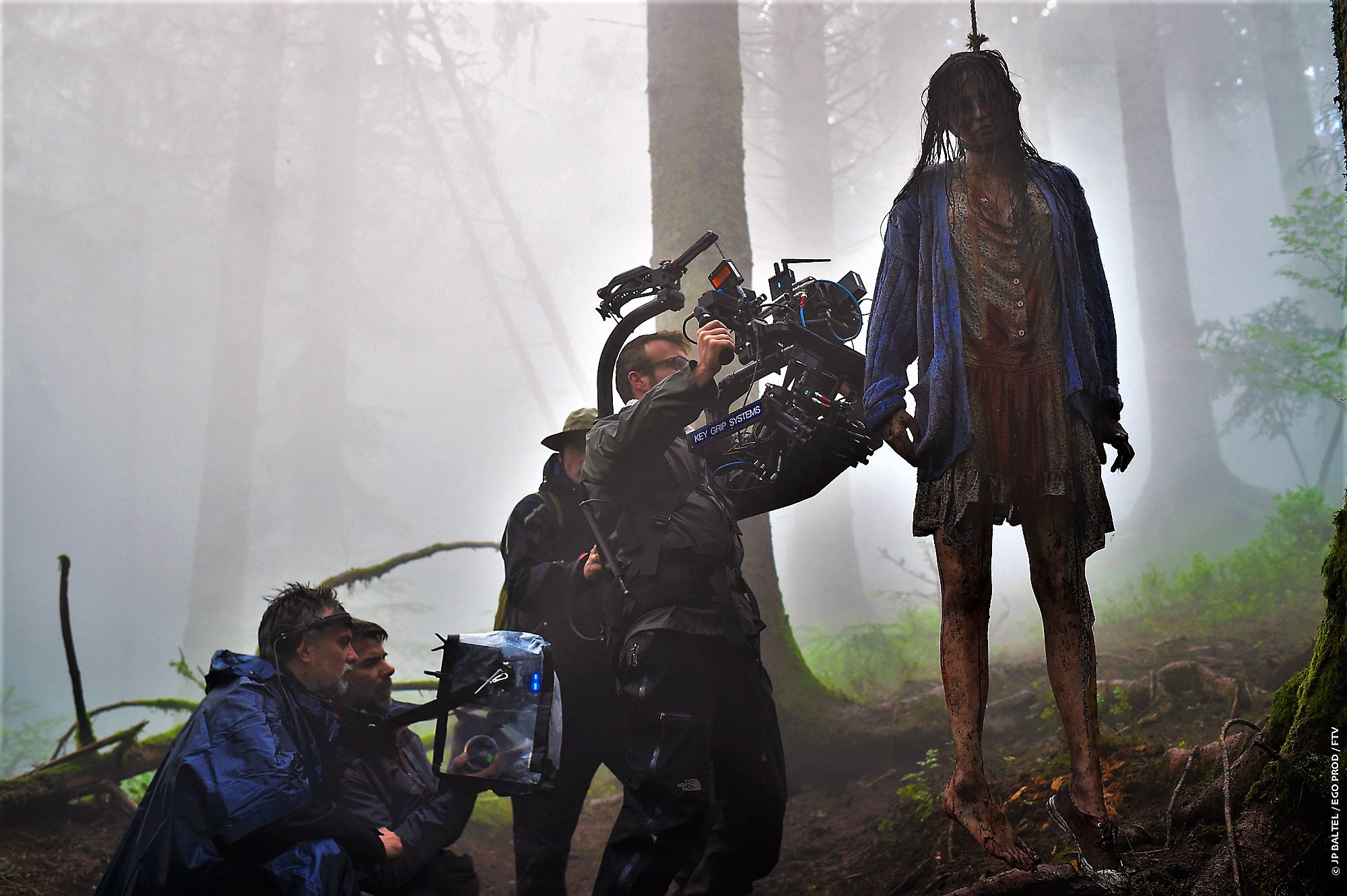 What will be your next series ?

CN : I just finished one in France, Nice, called “Riviera”. I am currently resting a bit before working on a series shot in English, “Versailles”. Anton Mertens is going to start it and I will do the second part. I should find another universe, made of amazing costumes, golden sets and lighting there. I will be working on a totally different style than the one in “Zone Blanche”.

What has the SBC membership brought to you ?

CN : I have been a member since 2014 and I am very pleased and happy to belong to this corporation of image creators. I hope that in the future, I will have more time to go to the reunions(which unfortunately often happen while I am shooting.)

Interview by Robert Lombaerts  and translation by Gaston Struye