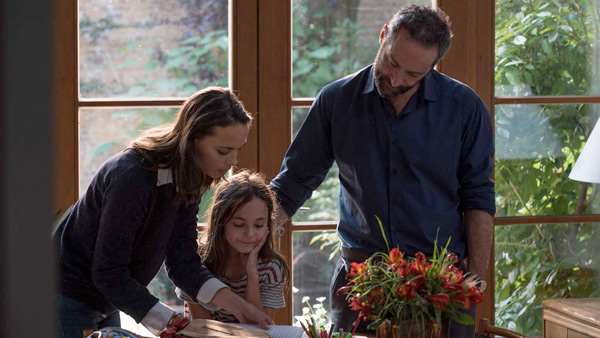 The cinematographer Jean-François Hensgens, AFC, SBC discusses his work on After love by Joachim Lafosse.

For his seventh feature film, the Belgian director Joachim Lafosse meets again the cinematographer Jean-François Hensgens, AFC, SBC, with whom he already worked on Avant les mots, Our children and The white knights.

Jean-François gives priority to a diversity of genres and had already worked on movies with very diverse aesthetics : dramas like Our children or Turk’s head by Pascal Elbé, action movies like The Squad by Benjamin Rocher, or Go Fast by Olivier Vanhoofstadt, but also comedies like All three of us by Kheiron or News from the planet Mars by Dominik Moll.

With After Love, nominated in the Director’s fortnight section at the 69th Film Festival in Cannes, the Belgian duo expands  some film making bias… (BB) 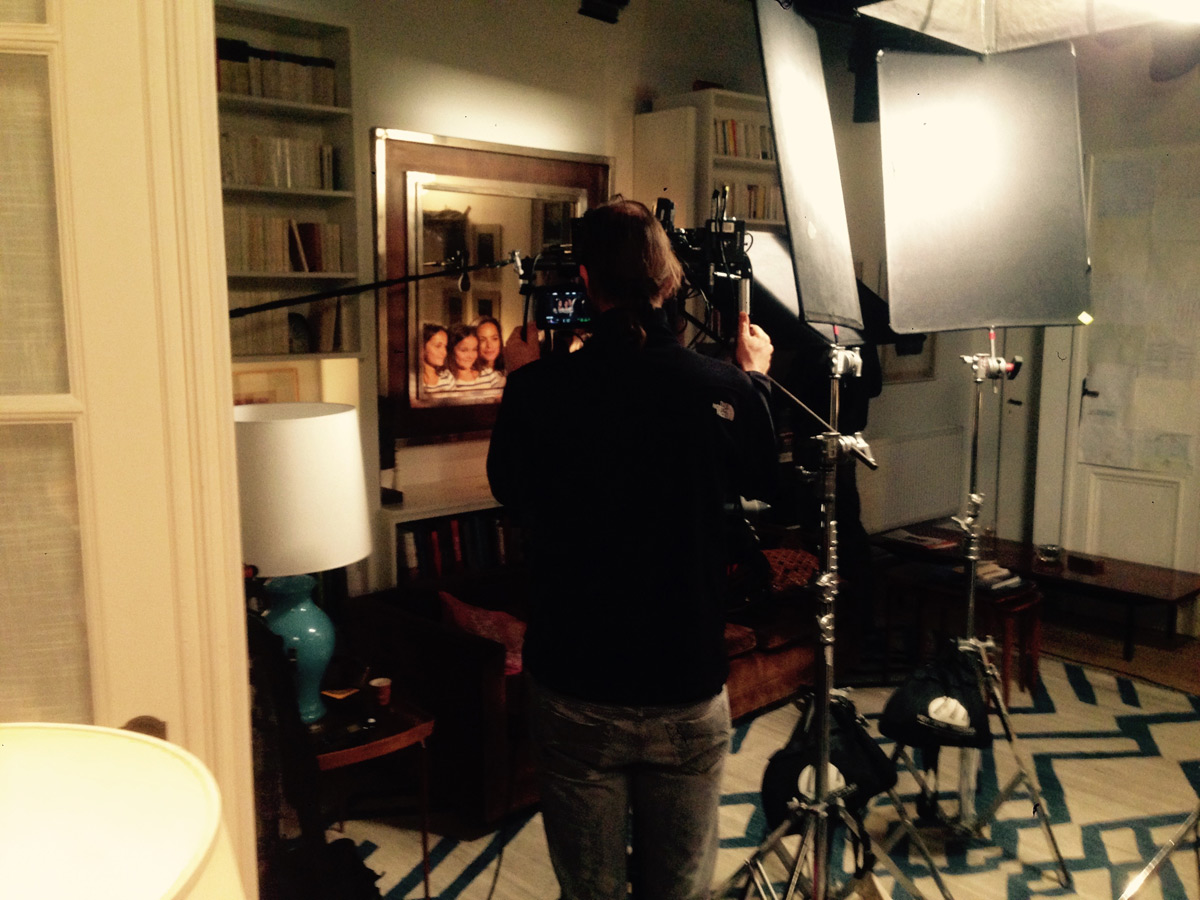 Jean-François Hensgens, from behind, with the camera on the set of “After Love”

Synopsis : She bought the house in which they both live with their two children, but he is the one who entirely renovated it. While breaking up and on the day of reckoning, each tries to hold on to what they think they contributed to their life together.

With Bérénice Béjo and Cédric Kahn.

There is really a progression in our collaboration with Joachim. Our complicity enables me more fluidity in my work but also a stronger ambition on both sides. The framing and lighting is more precise and more delicate, Joachim pushes me to put myself in danger and assumes with me the risky decisions.

During the prep, very soon he had the desire to shoot sequence shots, without compromises regarding the complexity of some scenes. Thereby, he has defined a playground that we used as a framework of principles ; the whole issue was to get to express ourselves and to make out of these restrains a force of work and creation. 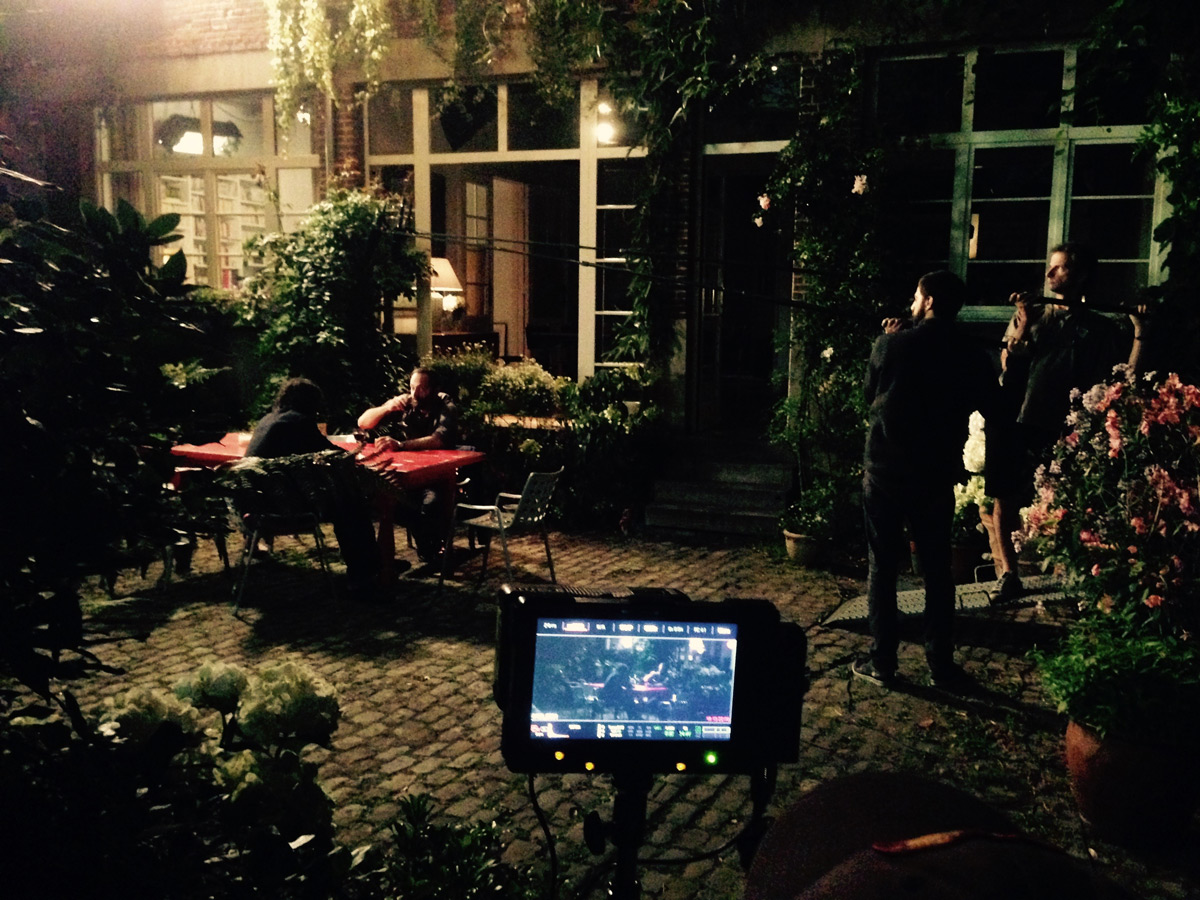 A set and its picture in a monitor

The right camera ? Yes, to shoot THIS story !

The bet was ambitious because the film was almost entirely shot in one location during a schedule of 25 days and almost interiorly revolving around one scene : a couple fighting. All scenes were played out as a sequence shot, sometimes in a static shot, but often by following a character.   We would shoot a variant favoring another character or a different ending…

But the goal was that every take would be usable from beginning to end. This represented a considerable amount of work, 20 to 25 takes each time, but also created the film’s guideline, allowing Joachim to explore on set as well as during editing.

The story is about a perpetual conflict in a couple. As we didn’t want harshness in the shots, a handheld camera would probably have been too brutal, the Steadicam would have taken too much space and I feel it would have made the filmmaking too mechanical…  and also I am not a Steadicam operator… The use of a dolly would have fixed things and I would probably have lost the fluidity.

On the film I shot before this one, News form the planet Mars, by Dominik Moll, I used a Stab One gimbal and it seemed to me, while sharing this with Joachim during the prep, that this tool could be the answer to his desire of doing sequence shots, of fluidity in movement.

The difficulty for me was to apprehend the movements by slightly anticipating them in order to avoid being beaten. This required from me to be extremely focused on the actors in order to feel their movements, but this feeling of connexion, this permanent ballet, was very pleasant.

Without lenses, no film !

During the prep, I was able to do tests in order to compare the new Cooke anamorphic set to the Master anamorphic lenses. I really like the look of the Cookes, especially regarding the skin tones and the flares, but I was embarrassed  by the distortions in the top and the bottom of the picture. It could have interested me for some other films but here, we were always moving, panning, tracking  in a set filled with horizontal and vertical references, I wasn’t satisfied. It seemed to me that the Master set could better answer the aesthetic equation of the film !

They maybe have less lovable anamorphic defaults, but the goal, to me, was that the viewer would be upon the very heart of the film and follows as closely as possible the characters. He shouldn’t be bothered by the technics. And the actors are so invested that we can’t afford a technical defect that could distract the viewer…

Choosing the lighting for this film

Once again, for not adding drama to the conflict that drives the whole film, we wanted the picture to be bright and sunny. But there is no sun in Belgium… (Laughter)

It was the first time I used as much light on a film ! 18 K’s diffused or not, and a Dinolight for sharper and warmer hotspots, everything was fixed on a truss structure mounted on the external courtyard wall. On the other side of the street, a 6×6 bounce with 3 or 4 18K’s reflected off it, and finally,  an army of  SL1 suspended inside that enabled me to create contrast throughout the film by filling the space depending on the sequence. 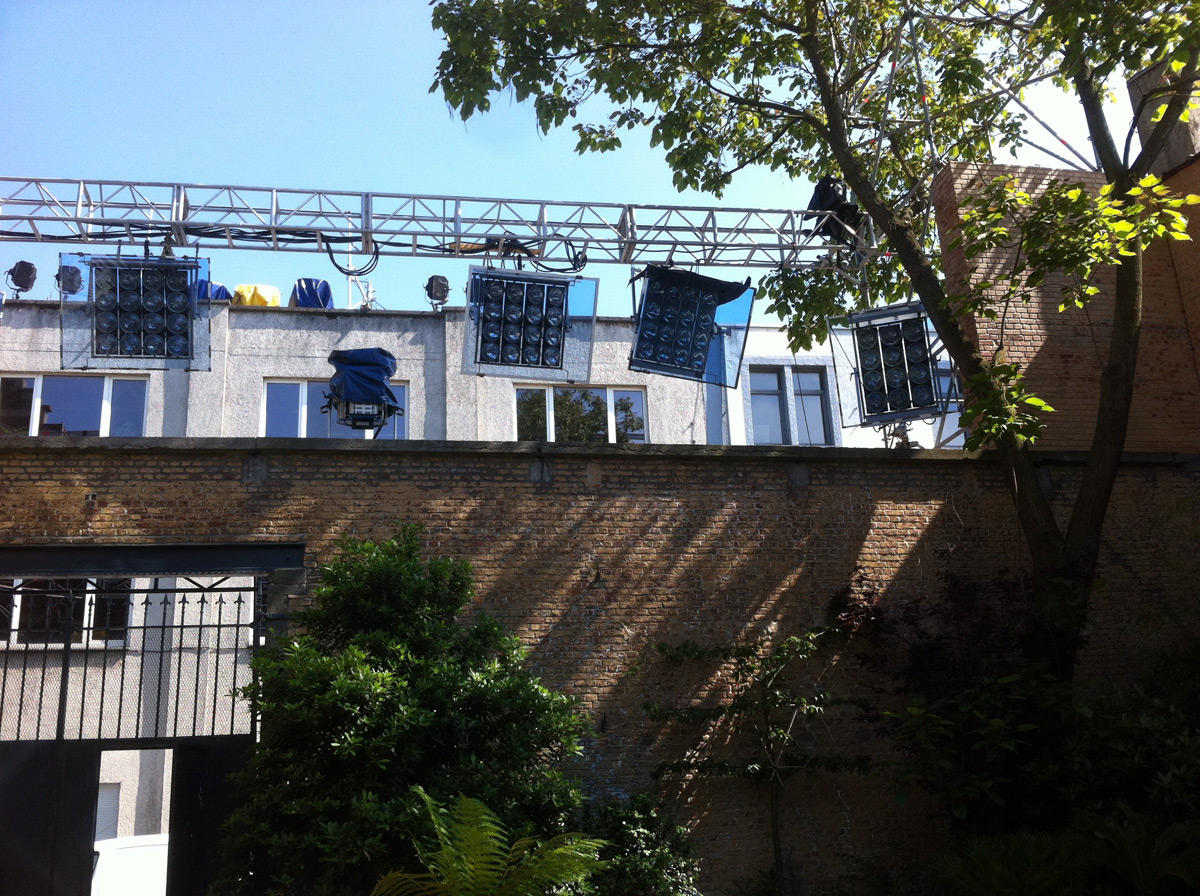 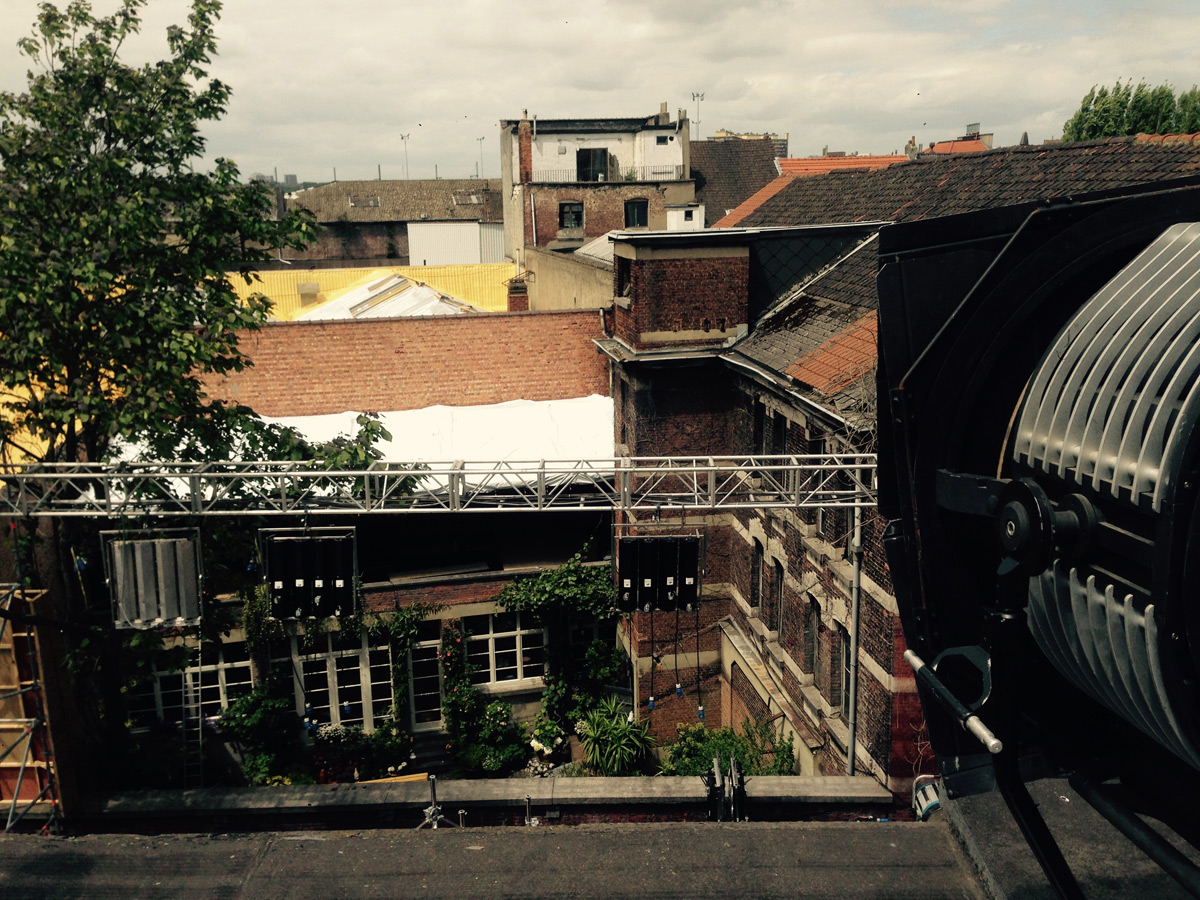 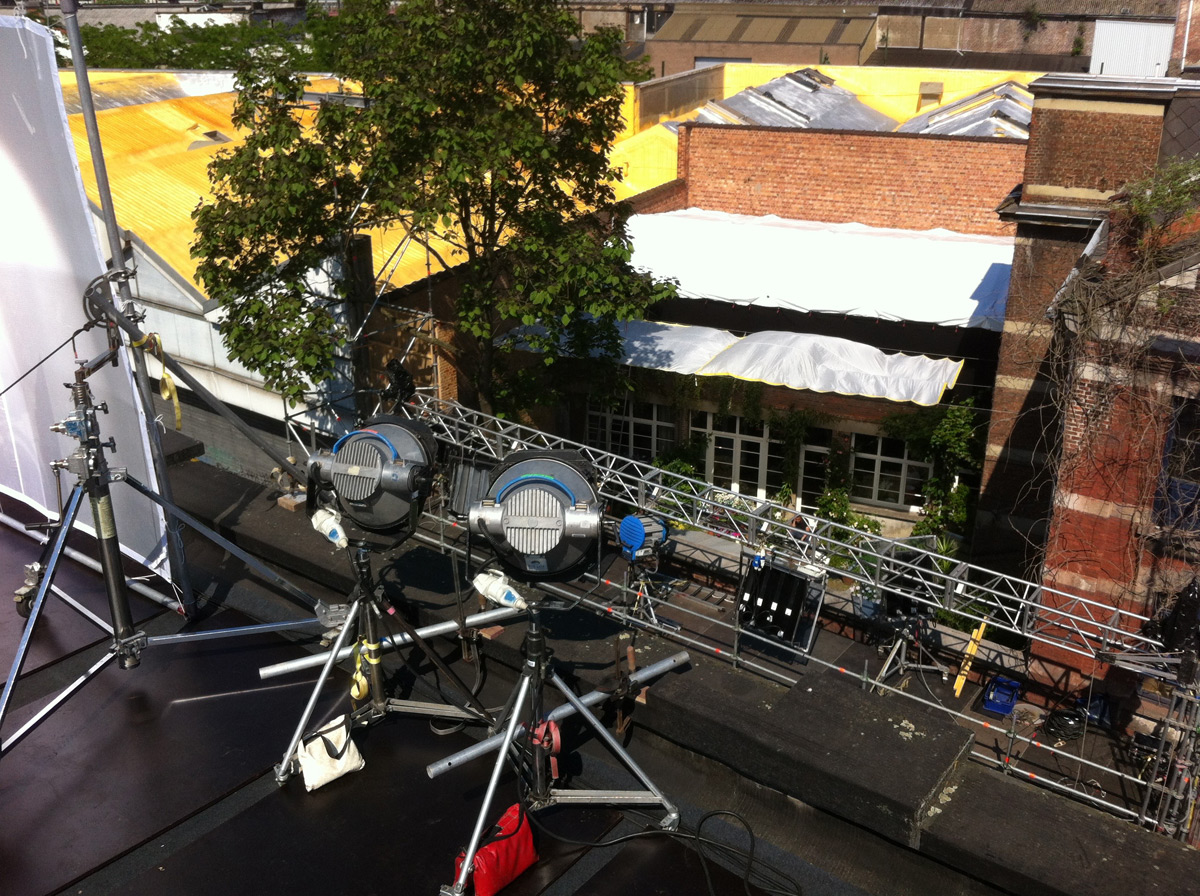 How about the colors ?

I wanted a colorful film and, thanks to the collaboration with Pascaline Chavanne, costume designer, and with Olivier Radot, art director, I was able to find the color contrast I wanted, often between blue-green elements (vases, carpets, shirts) and a golden hotspot from the sun , but sometimes also with a dash of red. I shot most of the nights with a cyan filter  turned down by 1, 2 or 3 stops and a sodium effect filter.

With Joachim, it’s never about looking pretty. Besides he pushes me to dare things. He can scare himself because his ambitions are quite high and I am there in that case to comfort him. Today we have this complicity that enables us to take risks.

We had a week of prelight to rig everything. During the shoot, we sometimes added a redhead with a Chimera or a Celeb for night scenes, but not much more. All the SL1 lights were configured with an iPad operated by Jérôme Di Cola, my gaffer, who could control their intensity, or turn them on and off during the takes. Doing scenes in a oner, I was risking to end up in a situation that I hate : with the source behind me ! If the source became frontal, thanks to this system, we could turn it off or reduce its intensity while shooting.

The prelight enabled us to react fast and to not let the changes of light get out of hand. I had enough sources to raise the stakes if necessary, by compensating the real sun or making it last with an artificial one. I also had the ability to open a big canopy in the courtyard to diffuse the sun and direct my sun underneath it to create hotspots wherever I wanted. Some shots were really complex, beginning in the courtyard to continue in all the rooms of the house. 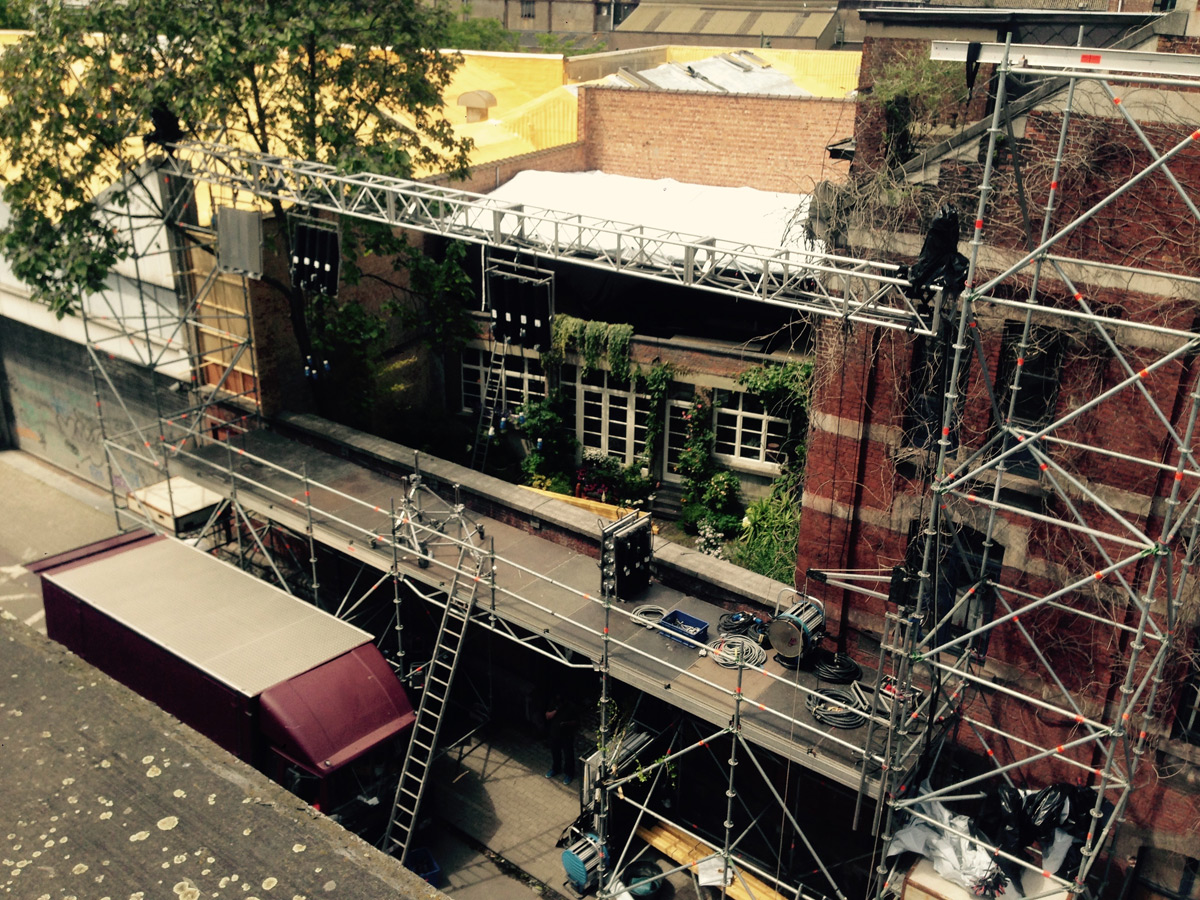 Did you change the stop while shooting ?

Not much, because I don’t like it. Most of the time, I regret it later ! With the settings that I used on the camera I should have kept the characters a bit more backlit and not to have over exposed them on the camera side as much as I did.  In grading we can’t recover all the way what we have over exposed, especially regarding highlights enhanced by the Hollywood Black Magic filter that I used on this film.

On the film the White Knights, I had kept the characters rather dark, especially inside cars with the outside slightly over exposed.

In After Love, there is some shots where I have been less radical, but I let myself be influenced by the DIT… and I shouldn’t have… (Laughter). His will to put everything between the margins of the signal drove me away from my aesthetic choice and I was not able to regain it completely during the grading. But anyway doing sequence shots, often quite acrobatic, like that are always subject to imperfection, it’s part of the game. 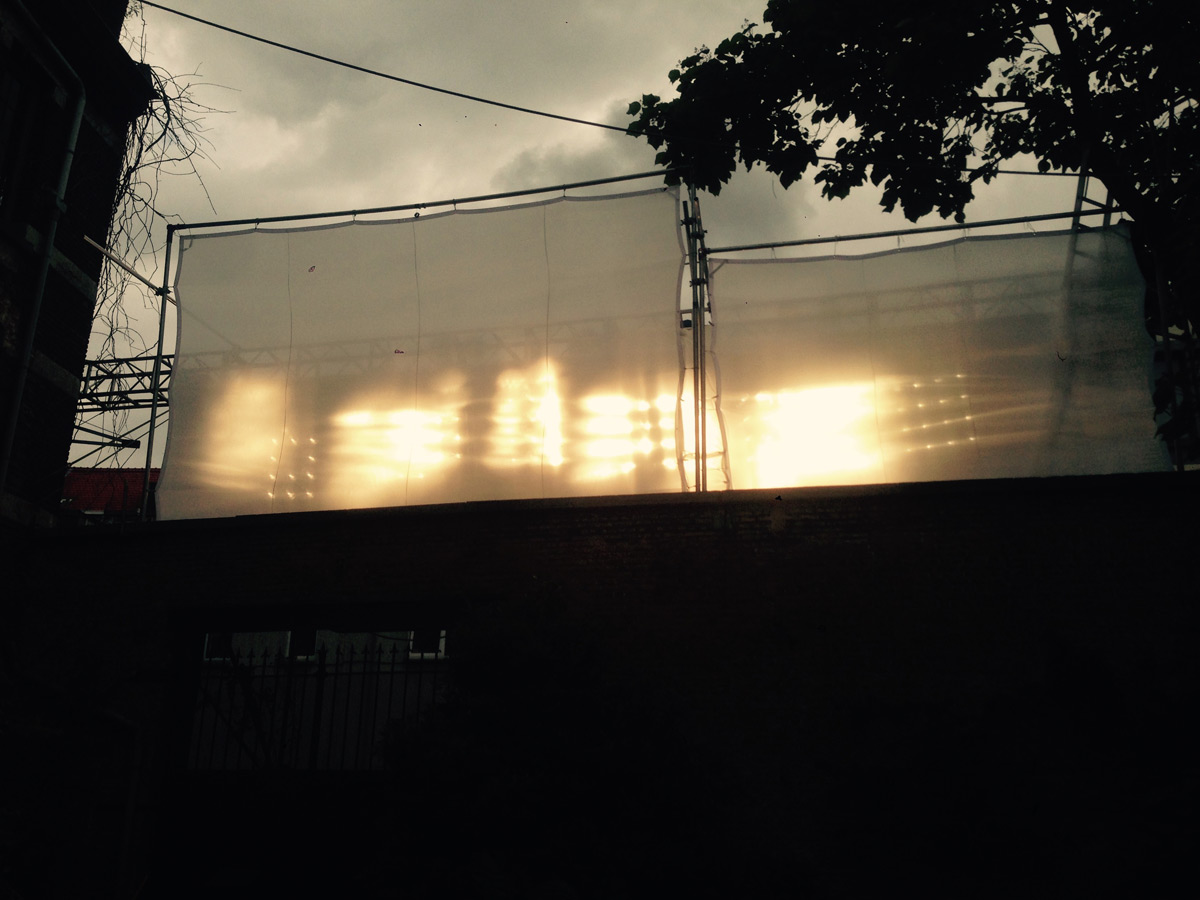 And precisely at the end is the grading !

The grading was done over ten days with Richard Deusy at M141. I really like the way he treats the RED Dragon’s pictures. I have done several several films there and the workflow is always impeccable. We quickly found the general tone of the film, colorful and bright, and we were able to spent some time to refine the results.

In my opinion it’s Joachim most moving film because it tells a story that can happen to anyone. The two characters represent what people are, how they live, what they are feeling. Sometimes, one identifies with the woman, sometimes with the man. That’s what makes the film universal. There is emotion from the beginning to the end.

(Interview by Brigitte Barbier for the AFC)