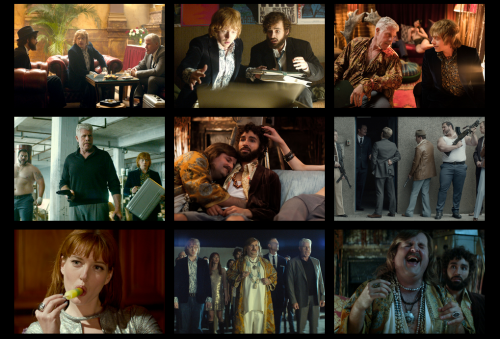 Glynn Speeckaret is a well-known name in the Belgian and French cinema circles. We have heard a lot about him this year for his nomination as best cinematographer at the César for Marguerite by Xavier Giannoli. He is also known for his diverse work on lights in movies such as Les garçons et Guillaume à table by Guillaume Gallienne (2013), The visitation by Robby Henson (2006), Ex-Durmmer (2007) and Soudain, le 22 Mai (2010) by Koen Mortier, L’origine by Xavier Giannoli (2009), La source des femmes by Radu Milhaileanu (2011) and Un plan parfait by Pascal Chaumeil (2012). For the release of his latest film, Moonwalkers directed by Antoine Bardou-Jacquet, we have asked him some questions about his work as a cinematographer.

Synopsis : After failing to locate legendary Stanley Kubrick, with the mission of persuading him to shoot a fake landing on the moon in case Mission Apollo 11 was a failure, an unstable CIA agent called Kidman must instead team up with a seedy hippie rock band manager to develop the biggest con of all time-staging. They are as different as can be but they have no choice and have to replace Kubrik, deceive the CIA and avoid all kinds of traps to save the day.

How did you come to work as a cinematographer ?

GS : I was born on the Flemish cost in Nieuport. My grand-father owned a funeral company. On Sundays, he replaced the projectionist of a small nearby movie theatre that belonged to one of his friends. It was a small-town theatre in the seventies : on the left side there were pictures of cartoons and on the right one pictures of naked women with stars on their breasts. As a result I spent every Sunday at the movies watching all the kung-fu films, Godzilla, etc. During intermission I would meet my grand-father in the projection booth while he changed the reels and he would give me a frisco. Then a while later I saw a lot of movies at the film club such as Fassbinder’s films and the like. At that time, my parents still had a black and white television set on which we mostly watched news but also movies from English, French, German and Dutch broadcasting channels.

Then I attended the RITS. At that time, it was not a very good school. It was mostly for television. So, like everybody else, I learnt the tricks of the trade by working and making movies with my friends. I did my first internship on a long-length film as electrician and then I was on.

Moonwalkers is Antoine Bardou-Jacquet first movie. How did you meet ?

GS : Antoine is awesome and very talented. He started doing graphics. He did a lot of high quality commercials, mostly in the USA. We met on one of his commercials. We liked working together so he offered me this project. I like his style. With this movie, he offers an unpretentious comedy whose sole ambition is to make you laugh.

It was a very ambitious project for a first long-length film, with a big cast. How did it go ?

GS : Yes, it was kind of a bet. Even more so as it was not poorly distributed. It is similar to what happens to Jean-Pierre Jeunet sometimes agents are not convinced. He was able to do it, because he did his commercials with Partizan. Georges Bergman, the producer, finances Michel Gondry’s films as well as those of Quentin Dupieux, who is not so famous but just as original.

The film has so many references : notably to Stanley Kubrick. How did you refer to his work ?

GS : Kubrick is the invisible character in the script, even though I think he never filmed a false moon landing, referring to his movies was a must.

The images are very colourful, there are many changes in the atmosphere and its visual universe are very marked. Can you tell more about your primary intentions?

GS : The objective was to revive the 60s and the 70s. The idea was to create a very colourful image with bright colours in the mood of the Flower Power. For the psychedelic scenes I had shown Antoine scenes from Inferno by Henri-Georges Clouzot and we reproduced some of his effects. We used maclights – mostly used on concerts – with which we could zoom and change colours as we wished.

Even though I did not quite enjoy it, we shot with two cameras. We had to to finish the film in time, but in my experience in that configuration you can never have the right angle for both cameras. I think the budget was around 5 million, but whatever the figure it’s never enough.

Did you have to solve any particular problems ? Particularly for the drug trip scenes which I imagine were not easy to shoot ?

GS : Actually, it was quite simple to shoot. For instance, for the girl’s drug scene, I used two bulbs of different colours and a glass in front of the lenses on which we let water fall. I mostly used old tricks from our craft because that was how they worked at the time that we were supposed to be filming. Some effects were made in post-production but only few after all.

What material did you use for the camera ?

GS : We shot with two Alexas. But I noticed that when we shot with red lightings, the definition decreased and blocks of pixels could be seen. But the image improved if we slightly altered the reds. To get interesting colours you have to shoot in film.

Did you discuss shooting in film ?

GS : Unfortunately it’s often discussed, but it is rarely done because of the budget. That is what happened on Marguerite. But it’s not always a matter of budget. For instance, on the movie that I am shooting at the moment, La promesse de l’aube by Eric Barbier, which is set in different periods, I wanted to shoot in different formats : in black and white 1,33 16mm, in 1,85 and in 2,35. Eric found it too much, I didn’t, but you have to follow your director. Instead we are shooting the film with an Alexa but with different looks, one for each period, mostly thank to the lenses. For instance we are using spherical uncoated lenses from Panavision that were made especially for us. I also have a more classic set that I use with Fog filters. I hate filters, but it is best for what we intend to do. Finally, we also have a set of Primo 70 and a G anamorphic set.

On this film, what set did you use ?

GS : The G set from Panavision. I like working with them. I live in LA and what I like about them is that you can talk about feelings, about what you are looking for in terms of rendering.

Where did you shoot ?

GS : The movie is set in London, but we shot it all in Belgium.

Who was your focus puller ?

GS : Didier Frateur was the main assistant. But I always leave the choice to my first assistant to frame, so he also did the framing of the second camera.

Did you frame the A camera ?

GS : Yes, actually there were only two weeks with two cameras out of thirteen weeks altogether.

How about the lighting ?

GS : I like Joker, Leeko. I used maclights for the drug scenes. For the moon scenes I used a 100KW Softsun because I had to send a lot of light but I didn’t want more than one shadow.

Where did you rent it ?

Who was your gaffer ?

GS : Dirk Van Rampelbergh. We have often worked together since the end of school. I mean, whenever it’s possible, depending on the production and his availabilities.

Did you use a lot of handle camera or did you shoot on dolly, on steadycam ?

GS : We used the dolly a lot, some shots were handled. When I work on fictions and whenever the budget is sufficient, I rent a mini aerocrane. It’s a rather long jib that you can put on a dolly with a scorpio head and that enables you to shoot from rather high and to do tricky shots impossible to do without it, more so because most of the time I frame by crank.

GS : Dries Leerschool. I think he rented the grip equipment from KGS.

How did the work with the actors go ? Especially with Rupert Grint et Ron Perlman ?

GS : It went very well. I think Ron Perlman had a good time. He got along very well with Antoine. The same with Rupert Grint, known for Harry Potter. I think they had a lot of fun. Several times we had to stop shooting because they were giggling.

The film has a very visual atmosphere, I suppose the collaboration with the other departments must have been rich and intense ?

GS : Indeed. I don’t like working in an office to prep a film very much. But what was nice here was to see the director’s references hanging on the wall, but also references to the period of time and little by little to watch the film’s image and style take shape in every office. When I was getting tired of sitting at my desk in front of my computer, I watched what was going on for the costumes, or sets…. the benefits of that configuration was that without speaking everyone could see where we were heading.

A lot of things were exaggerated in post-production : exploding heads, splashing blood, bullet impacts on the walls… It was not sufficiently violent for them. Since it’s comedy, it’s violent without being gory, in order to be noticed, you have to exaggerate, like in Tarantino’s films.

How did you handle the post-production ?

GS : They had no budget left so they didn’t call me. It was ok because Antoine has a very good eye. Didier Le Fouest did the grading. They did a wonderful job.

Wasn’t it too hard to let the finalising of your image to someone else ?

GS : Actually, I’m used to it because I’m not always available. Besides, I shoot in a way which makes it really hard to change my direction. The grading is quite obvious, because choices have been made. It’s also the reason why I like to work with a DIT who does more than transcodes, who does the grading directly on set before the image arrives on the director’s monitor. It was not really the case on Moonwalkers. There was a DIT, but he could not work as precisely as I usually do because we didn’t have the proper tools for budgetary reasons. The benefit of this approach is that the director can immediately see the best image, both on set and furthermore while editing.

GS : It’s an unpretentious comedy, but it’s quite good. I’m a bit disappointed that it is so little distributed. It should be more widely available.