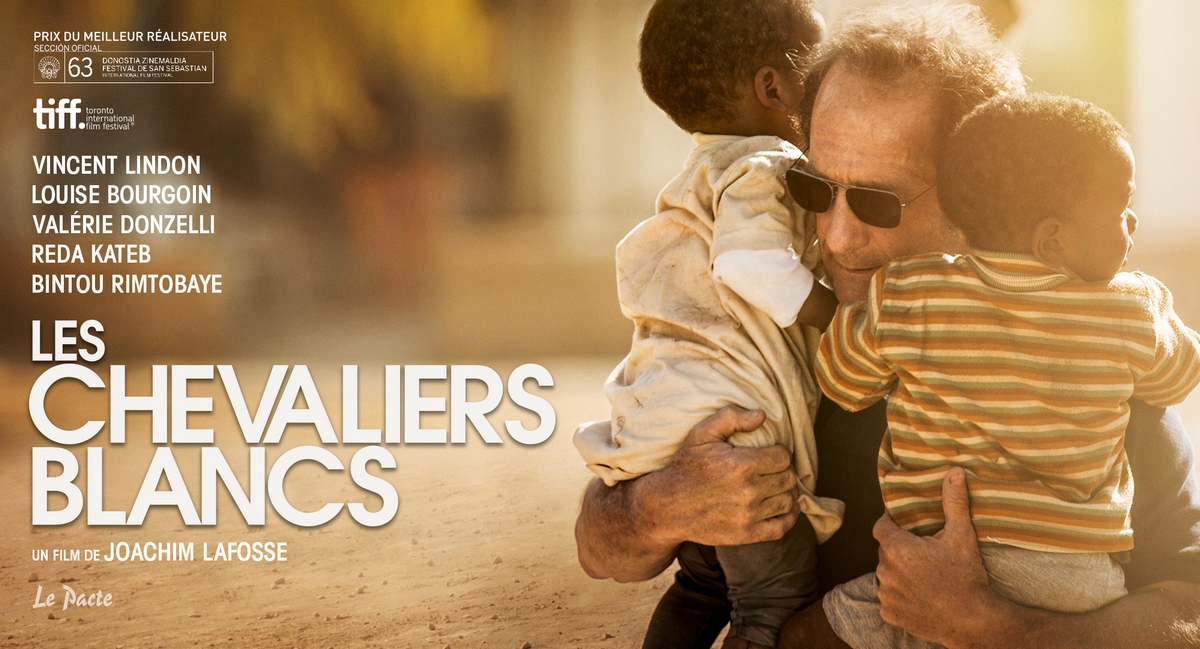 Jean-François Hensgens is a SBC and AFC member. For instance, he has shot movies like Victor by Philippe Martinez (2014), Turk’s Head by Pascal Elbé (2010),  District 13: Ultimatum by  Patrick Alessandrin (2009), Dikkenek by Olivier Van Hoofstadt (2006) and Dark Tide by John Stockwell (2012). The white Knights is his third collaboration with  director Joachim Lafosse. They worked together in 2010 on Entre les mots (a short film) and in 2012 on Our Children.

The White Knights, staring Vincent Lindon, Louise Bourgoin, Valérie Donzelli, and Reda Kateb tells the story of Jacques Arnault, the head of Sud Secours NGO. He is planning a high impact operation: he and his team intend to exfiltrate 300 orphans victims of the Chadian civil war and charter them to French adoption applicants. Françoise Dubois, a journalist, is invited to go along with them and handle the media coverage for this operation. Completely immersed in the brutal reality of a country at war, the NGO members start losing confidence and are faced with the limits of humanitarian intervention.

Jean-François Hensgens wrote these lines for the AFC’s website. They were kind enough to let us post it.

JFH : « In September 2013, production companies (Versus and Les films du Worso), Joachim Lafosse, Olivier Radot (art director), Franz Richard (executive producer in Morocco, Ali N’Films) and I went to Erfout, in the Moroccan desert to visit possible sets for The White Knight, Joachim’s latest project. The script has been inspired from a scandal that involved NGO « Zoé’s Arche » and is supposed to take place in Chad during the civil war.

Very fast, one location felt obvious for the camp. Olivier imagined and built what would become our main playground for a couple of months from scratch.

The possibility of building the villages necessary to the story as well as Abéché’s crossing nearby at the arrival of the protagonists seemed feasible therefore we promptly decided to shoot the film there.

I discovered the RED Epic Dragon on that occasion – as I have already said before (ndrl : read All Three of us’s interview). I was mostly pleased with the rendering of the camera, the colors and texture, especially since I used it at 2000 ISO. Furthermore, in that case, we had to shoot inside cars and planes, so its ergonomics would really help me.

A few weeks before shooting started, I was on set to do some tests. While I was trying out shots that Joachim and I had been talking about during prep, I was able to explore the great dynamic range of that camera: for instance with it  you can shoot from the inside outwards without changing diaphragms, or inside cars with high contrast. I also chose this camera for the color rendering of materials – costume designer Pascaline Chavanne  lent me several shirts selected for the movie – and also because I had to face a very worrying issue : how to shoot very pale faces (for instance Louise Bourgoin or Valérie Donzelli) together with very dark ones (like Bintou Saleh or Tatiana Rojo).

Panavision France, Oulida Bolloc’h and Olivier Affre helped me a lot for these tests. I had brought along with me a 50mm from the anamorphic G and C sets and from the spherical Primo set. After lab M141’s processing and tests screening in a movie theatre, Joachim, the producers and I decided to shoot with the G set. Our decision to shoot in 6K 5:1 was also based on these tests, which enabled us to get very high quality files that were not too large – data storage being a tricky issue in the middle of a desert -. During the shooting, rushes were developed at the lab and taken back and forth on hard drives.

We wanted our pictures to be warm and colorful to convey Chad’s climate without overburdening the atmosphere and subject. Capturing the heat and dust was part of our cinematic ambitions and we worked together at achieving that. We decided to shoot only by hand (we took neither stand nor head) with two cameras (Julien Bureau contributed with his skills as second camera unit). Joachim and I also chose to favour high lights; overexposure was not an option for this film so I used figure back lighting more than I was used to for some situations like inside cars.

Olivier Radot, my gaffer, Vincent Piette (with Brahim El Mazrhi and Driss Jail) and I worked together at making camp suitable for shooting both at night and during the daytime. I used and played on existing supporting lights, as well as on apparent fluorescent light tubes or street lights as creative supports.

The camera crew led by my first assistant Amaury Duquenne (with whom I have worked for twenty years, since he was second assistant camera when I was focus puller for the Dardenne brothers) and Mohammed El Ourdi (aka Simo)’s key grip team had to manage with the sand and with the complex focusing due to reduced depth of field (diaphragm was often 2,8 1/2). The results speak for them. »

Below, some frames of The white Knights :