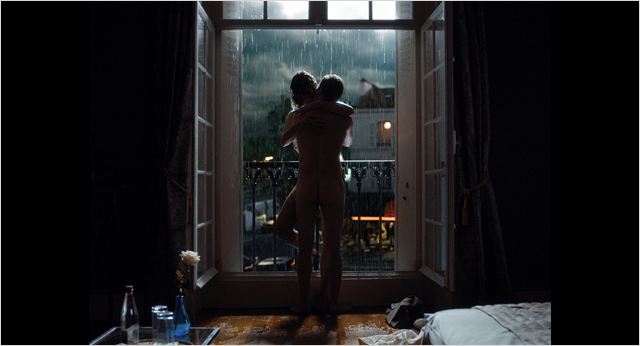 Christophe Beaucarne has been working for over twenty years with very different directors on films with very different visual worlds. He has worked with the Larrieu brothers on Un homme, un vrai and Peindre ou faire l’amour, and with Anne Fontaine on Coco Before Chanel and Perfect Mother, with Jaco Van Dormael on Mr. Nobody, and recently with Christophe Gans on Beauty and the Beast. With The Blue Room, the fourth feature film by Mathieu Amalric, competing in the Un Certain Regard section, Christophe Beaucarne is once again working with Amalric, following their collaborations on Stade de Wimbledon and Tournée. Adapted from the eponymous novel by Georges Simenon, Mathieu Amalric plays the lead role alongside Léa Drucker. (BB)

Synopsis: Julien Gahyde, in prison and under interrogation as a suspect in the death of his wife Delphine, mentions his short adulterous relationship with Esther Despierre, a childhood friend with whom he crossed paths once again, and, in an overly-flippant answer, declares that he “loves” her and might “live with her”. 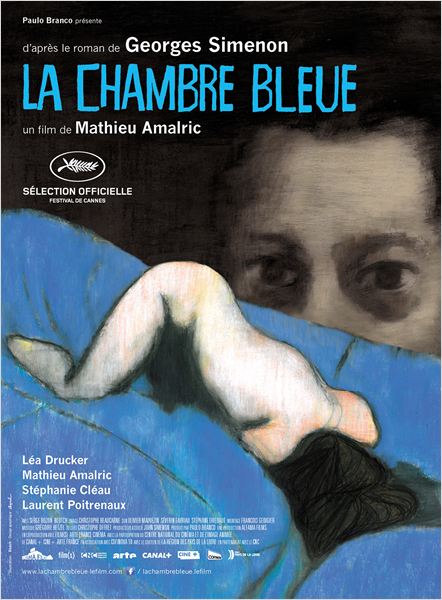 Interview conducted by Brigitte Barbier for the AFC and translated from French by Alex Raiffe.

The format of the film is rather unexpected, why did you choose a 1.33:1 ratio?

Christophe Beaucarne: For an adaptation of Simenon, a square format allowed to give the impression of narrowness without moving the camera. For example, for the love scenes in the blue room, we wanted the the bodies to move around inside the frame, rather than to have the camera follow them around. With the horizontality of the bodies in the bed, and the very vertical frame, the result is that you see slices of body… it’s pretty unique!

Most of the time, we’re inside Julien Gahyde’s head. With the square format, we can move outside the frame as though his eyes were attracted by something other than the person who is in front of him. You can leave the head at the bottom of the frame – because his gaze is attracted to the wall beyond the head of the person standing in front of him – and it remains beautiful. With the Scope, if you put a head in a corner, it looks really poorly framed. With the 4/3, the photographic side is what stands out.

This format is especially well suited for the courtroom scenes that are very vertical, with the judge sitting above everyone else. I also like having the ability to isolate the actor by constraining him within the frame, since Julien Gahyde is, in the end, a very solitary character… I had avoided 4/3 since my INSAS days because everything we wanted to do was in Scope! I rediscovered this format and I find it was a very good choice for this film. 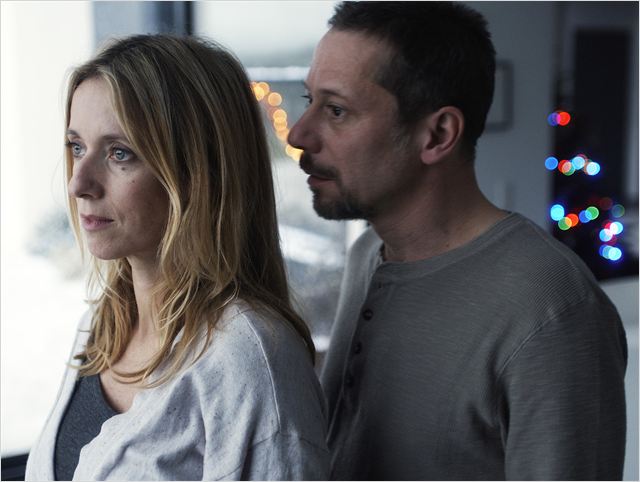 Your lighting choices are related to the fact that this is a film noir.

CB: No, not particularly… In fact, they were more related to the film’s story. This film does not look like a thriller. The construction is really original, with a fairly complex screenplay. There are constant flashbacks until the trial, with voice-offs over the courtroom scenes. It’s like old time cinema, a bit like Chabrol and his depictions of crimes of passion in the French provinces, but the construction of the film and the framing are modern.

We used a lot of natural light, I shot with a shallow depth of field. The tones are quite cold, especially for the Julien – Delphine Gahyde couple’s home, which is the scene of the crime. The only place that is a bit stylized is the bedroom, where the film begins. We shot in a real hotel room with three projectors, this is the only place where I had a little bit more elaborate means at my disposal.

For all interrogation scenes in court, the image is more desaturated. I love the scene where passion begins between the lovers. We had to shoot in twilight but the sun came out, a beautiful sunny winter day. Mathieu added music inspired by Vertigo.

Did the production condition (tight budget and just five weeks of shooting) influence your choices in terms of camera and lenses?

CB: Yes, completely! I chose the Sony F65 with which I’d already shot twice before. I knew I would not have the opportunity to have many light sources and I would be working via substraction. The F65 is very good in very low light and at rendering colour. For the summer scene, when the lovers go on vacation to Les Sables d’Olonne, we ended up on a beach with 20,000 people! As this isn’t a particularly impressive-looking camera, nobody paid attention to the shoot. It was very colourful and the F65 allowed me to keep the colours quite strong and beautiful.

The lenses are Master Prime, which I chose for their aperture. I regretted my choice later on… I’d used these lenses on Beauty and the Beast, but there the sets were crazy and I had total control over the lighting, it was easier. Master Primes in full sunlight are a little tricky…

Currently, I’m using Leicas at a 1.4 aperture, they are softer, rounder. I should have chosen these lenses for The Blue House, but I’d not yet tried them out. And with the limited budget… Shooting with the F65 was not bad!

In fact, the ideal is to have lenses with a large aperture for nighttime scenes or indoor sceens without light, and lenses that are “softer” with a limited aperture for outside shots in daylight. For even by filtering, there is always the risk that the wide shots outside in daylight are too “sharp” and reveal too much of the grain of skin. 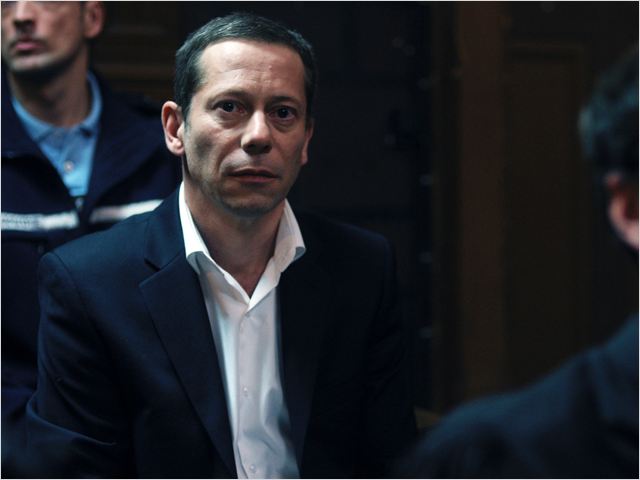 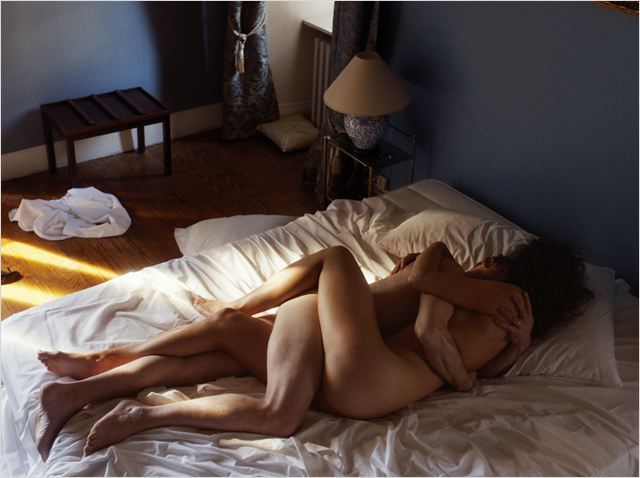 What was your communication like with one another during preparation and shooting with Mathieu Amalric?

CB: Mathieu had done scouting all by himself, and had very specific ideas for the sets. He regularly showed me pictures; I discovered the location the day we began shooting. This is our way of working and it’s very exciting.

_This way of working reminds me of the cameraman in French Connection, who used to film documentaries. He knew nothing of the scene, the director would bring him into the room and the cameraman would film what he saw… When we discover a place, we immediately have the instinct to try and optimize it.

We talked about the overall style of the scenes before shooting, and once on location, I could improvise with our conversations still in mind. And especially since Mathieu acts in the film, we had to discuss the scenes beforehand!

For the big courtroom scene, Mathieu asked the decorators and accessory people to prepare a real case file that he then gave to real judges. The judges didn’t know one another, and they all pleaded the case as though it had been a real one.

We set up a dolly and for the two hours of the case, we filmed in every direction, withoug interruption. I tried to shoot what I could. I didn’t have too many problems with continuity, because the trial takes place over a few days. This was a good thing, because the sun was playing hide-and-seek! I had set myself up in a good location and I had darkened the windows on one side of the room.

With Mathieu, everything happens very quickly, because we like the same things, and are usually in agreement with one another. He always has special ideas. He can sometimes mix up points of view in the same scene, and go from the point of view of the star to that of the judge. The Blue Room is a very brilliant film.