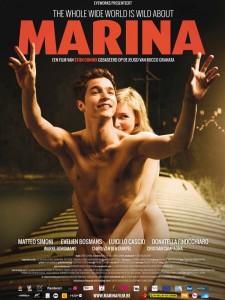 Italy 1948. Ten-year-old Rocco is growing up in a gorgeous mountain hamlet in Calabria, until one day his father Salvatore decides to seek a better future for his family. The greyish mining landscapes of Limburg, icy winters, a foreign language and culture all put a damper on the little Rocco’s happiness. But still Rocco wants to be like other youngsters: become someone and have a purpose in life. Against his father’s wish and better judgement he seeks an escape through music and love. Rocco follows his heart and passion to fulfil his dream. His song ‘Marina’ went on to become a worldwide hit.

How did you get involved in the project?

LB: Stijn had been working on the subject for a long time. I believe even a few years . As is often the case, they had a hard time getting the funding together. Eventually the production company Eyeworks was able to raise a minimum budget, so there was a go for the film to shoot in the autumn of 2013. I myself have only been contacted in the last stage by producer Peter Bouckaert ( Eyeworks ) . As I had no real set history with Stijn, my availability and my previous collaborations with Eyeworks played a role in my getting the job.

After a first reading of the script, notably the migration story struck me , I was immediately a fan . At the same time I must admit that I was very flattered by the request to shoot the next Stijn Coninx movie. Interesting detail . I got the script  just before I went on leave to the Caribbean, far away from the harsh reality of the “Cité” and re – looming “migration” problems , under an azure blue sky  I read ” Marina ” in one go.

Because Stijn had been working for so long on this project , he was incredibly well prepared and very driven. Everything had already been discussed with the actors ( Matteo Simoni , was already well preparing for this role ) , the co-writer and production.

As the film would take place in Limburg, the area where Stijn lives, he had already done a tremendous job in finding the right locations himself. The advantage was that there were several options to choose from, so I  was not forced to agree upon locations that did not work for me. This was important because we were shooting a period piece and had a limited budget, so we did not have exteriors or interiors that could be used in 360°. It was a challenge to find among the limited remainders of the mining sites of  Limburg enough believable angles that worked, within the timeframe of the 50’s and 60’s. I am  a big fan of the saying, ” a good location is already a battle half won .” Stijn knew very well  the intent of every scene so I was briefed very well by him.

Have you gone to consult with Rocco, to help you determine  the look of the film ?

LB: I myself , have never gone to consult with Rocco. But I suppose Stijn had long acquired a sate of confidence at the Granata residence and thus knew 99 % of the Rocco story . After many joint trips to various locations , it became clear to me that both had forged very strong bond. But for me as well these trips were a good opportunity  to go through the script with Stijn. It was an incredible strong experience. I think I have never been so well prepared for a movie and knew what the film had to be about . It is a good method for a director and DOP to get on the same wavelength and thus avoiding each having a different vision at the start of a new film project. A much better approach than having a couple of meetings together, in between ones busy schedule.

Once we started to create the look of the film it was great to discover that within the boundaries of the script I was given a lot of freedom to make suggestions about the framing and use of light. Regarding the choice of the light palette , as usual I like to do research. I often get inspiration for styles , colors and shades in specialized books that display when the spirit of  the era. This was then discussed with Stijn and we were soon on the same wavelength . He actually gave me  carte blanche. Albeit within the boundaries we agreed upon.

The advantage was for this production that I had already experienced  similar limitations with my previous film ” groenten uit Balen ”  which was set in the 70’s. It is about adapting to what is possible and getting the most out what is given, without putting to much pressure on the production.

Once we agreed on the look of the film , I shot some tests on location with the Alexa , I made some frame grabs and along with colorist Peter Bernaers made ​​several LUTs  to be used on set. For Marina I created six different LUTs to determine the look and feel of the different periods : Italy in the late 40’s and the 50’s & 60’s in Belgium. The advantage of this was that it gave us a rough idea on set of what the film could look like. 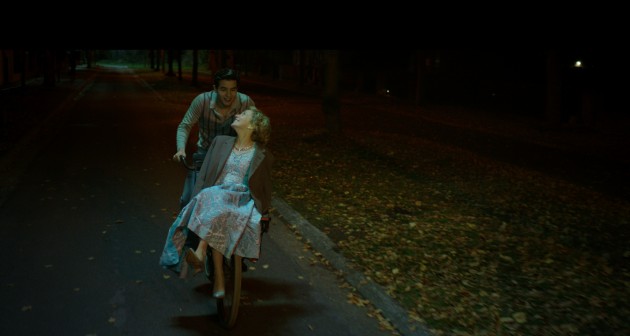 The film is set in the mining region of Limburg.

LB: Yes, It was a wonderful reunion with my old habitat . As a toddler I have even lived  for a short time in an apartment where I mostly remember the view from  the living room window being the Beringse coalmine . I took part in the sacred procession of the miners as a child, I’ve even found some photographs of this recently. The rest of my childhood I spent in Leopoldsburg , that lay in the shadow of the Beringse coalmine . Besides my school friends , Dominique Deruddere  ( film director) and Marcel Vanthilt ( tv personality) , many of my other classmates and friends , were children of miners. I often visited as a child the mines on visiting days , descending into the pit , which has left a deep impression on me. I was also an ardent fan of FC Beeringen , then still playing in first class and which , although part-time , half of the players worked for mining company in Beringen . Just to say it was a little like coming home . One of the locations we filmed in was a former hall where I as a 17 year old partied till the early hours!

Integration is one of the major themes in the film. I myself had been never faced with racism in that period. All nationalities were sitting together at school and participated in sports and parties. I knew Chokri Mahassine, now known organizer of the Pukkelpop festival, growing up at our Atheneum and  never realized that he was of Moroccan origin. Just to say that for us it was not a big issue. Only later, when I went to Brussels for to studie, and the mines in Limburg had  since been closed, that it was much more present.  Of course I have to admit that I was not living in the “cité” as Rocco did, where the living conditions were different anyway. My musical preferences were also quite different in that period to have an interest in what Roco was doing musically back then. But I must admit that I was bit taken by the fact that Rocco called me in all his enthusiasm the belgian Storaro, during the shoot  and in public.  It took me a couple of weeks to convince him to quit doing this… the comparison is too embarrassing :-).  Of course I was also a little bit proud that he, the man whose life we were portraying, was happy with the look of his story.

Some scenes of the film are set in the coal mines, which are no longer there. How did you recreate this?

LB: All the above the ground mine locations were shot in Beringen . The exterior locations were carefully chosen and where possible had the old existing shafts and towers in shot, out of focus. Otherwise they would not have been credible. Using my personal set of Cooke S4i lenses helped a lot in this. It was a matter of being especially careful with the backgrounds. With Stijn we agreed that not all the locations should be historically correct but should have the right atmosphere to tell the story, which was the most important thing for him. Not having enough budget forced us to think this way as well. For scenes set inside the mining building we wanted to create a sense of as many miners in a giant space as possible with a limited number of extras. Using short focal lengths and hazy, smoke filled backgrounds helped. As did the cinemascope aspect ratio, by not showing the height of the halls,  which otherwise had to be filled with extras.

All the underground mine sets were shot in Blegny , a restored mining site near Liège . Short focal lengths , steadicam , top lights ( Kineflos + green plus) tucked behind the top lines in the ceiling , preinstalled miners lamps converted to 12V and again ” hazy ” smoke look , turned out to be the right tools to make it look as believable as possible. As we were allowed only one day to shoot on the site, and the real narrow tunnels were due to safety regulations not usable as a film set, we had to build the tunnel sets and the descending shaft elevator in a nearby hangar. A wonderful set designed by hubert Pouille. 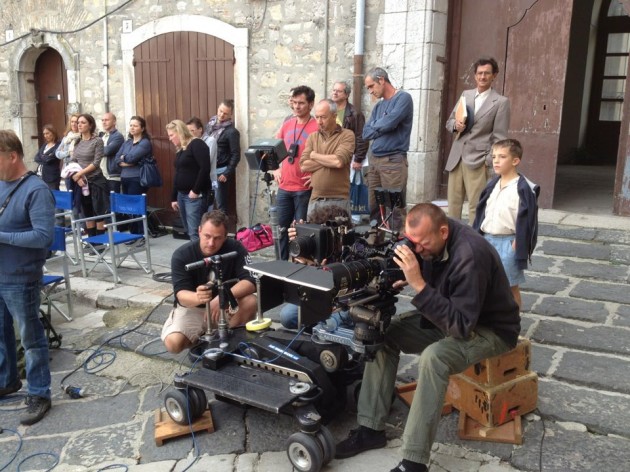 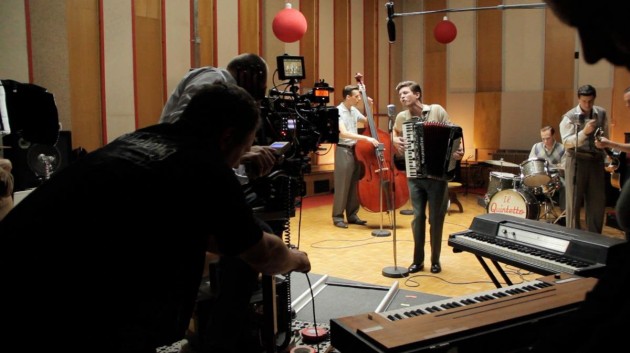 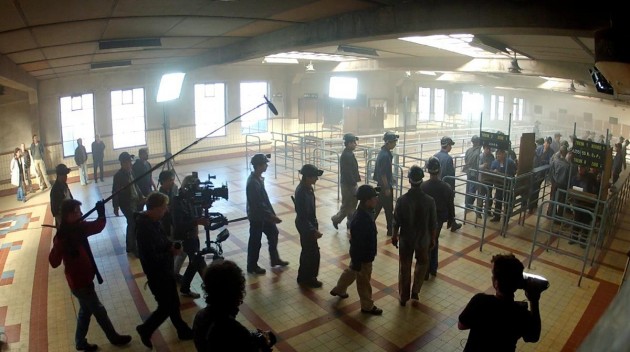 There are also some scenes in shot in Italy, how did  this work out?

LB: The Italian part took place in  a typical village on top of a hill called Bovina in the region of Bari . We were limited to only three shooting days and we were unlucky that we had cloudy days. Which was unfortunate as script wise we wanted to contrast the warm and sunny Italian part with the cold and gray Belgian one. Production and Logistics were taken care of by the Italian co – producer Cristiano Bortone ( Orisa Produzioni ) . What I immediately noticed is that  we were confronted with a different film culture in terms of organization. While we hyper – organize everything and the principle of ” check and another double check ” prevails , the Italians work at their own pace and according to their own rules, which are mainly determined by the unions. Very professional but different.

Logistics on the site were not evident. Trucks could not make it to the locations, so all the equipment  needed to be transported in small Piaggio Vespa’s . In other words, everything took twice as long . I was therefore forced to shoot  a complete scene , the dance scene in the beginning , day for night. Furthermore I discovered  that the light and grip rental equipment did not have the same quality I am used to have from our rental houses. And according to the producer was still twice as expensive as in Belgium.

But what I will remember the most is that all these Italian film technicians had the same enthusiasm and passion for filmmaking as we do.

Armed conflict in reportage and fiction