It is with sadness that we learned of the death of former SBC president André Goeffers on the eve of his 80th birthday.
He left his mark on a era of cinema and photography in Belgium after his studies in France, working with directors like Jean Delire, Jean Brismée, Frans Buyens, Emile Degelin , Paul Meyer, Gérard Valet.
Many IAD students have passed through his muscular pedagogy in the 30 years he taught cinematography.
In 1996 he became president of the SBC until 2008.
Our thoughts are with his wife and children in these difficult times. 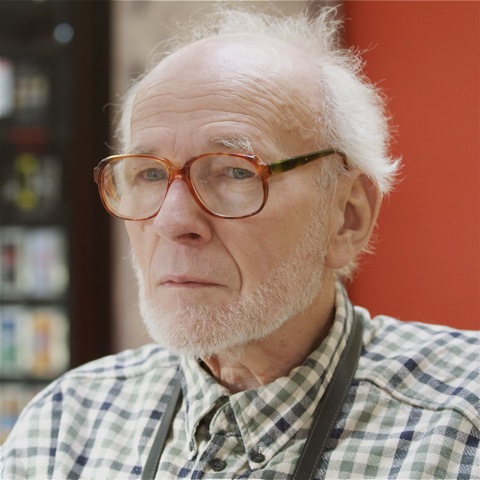 André went explore different oceans at the dawn of its 80th year.

Born in Montignies sur Sambre , in 1934 , at age 22 , André decides to leave to study directing at  the main film school in Paris, IDHEC , where he rubs shoulders with Alain Cavalier, Costa Gavras , Yves Boisset , Johan van der Keuken . He completed his studies with a certificate in photography.

His first steps as 2nd assistant cameran , he performs alongside two big names : Alain Resnais realization and Ghislain Cloquet photography on “All the World’s Memory ”

Back in Belgium in 1957, he continued his training by assisting Jean Delire , Willy Kurant and he replaces Freddy Rents to complete the film by Paul Meyer « Déjà s’envole la fleur maigre ».

André joined the RTBF as a freelance operator  in 1959 and thus began a long collaboration until 1976. He then participated in making programs that are part of the Belgian television heritage.

He does not neglect the independent filmmakers either and works on many films of Jean Delire , André Delvaux, Brismée Jean Henri Storck, Gérard Valet and also Frans Buyens and Lydia Chagoll  on many occasions .

Meanwhile, in 1968 , he shares his vast technical knowledge at the film school in Brussels. Helping students become camera operators until 1999 , they will always remember his sometimes “muscular” but passionate way to communicate the art of cinematography.

In 1992,  saw the formation of the European Federation of Directors of Photography in Paris, at the initiative of his friend Luciano Tovoli and Pierrre Lhomme.

At this time , the Belgian Cinematography community was not yet organized in an association as were  most countries around us. It was André, at the invitation of Tovoli in 1993 who brought together a group of 10 directors of photography and created the Belgian society of cinematography, the SBC , which he will bear , with strength and determination as president from 1996 until 2008 taking over from Walther VandenEnde .

Imago joined the SBC in 1994 and André was there representing us in an  efficient and motivated way overcoming the difficulties of communication, politics and language that are not usual in these kind of international organizations.

Thank you Andrew, you created the SBC , it now enjoys a solid reputation and respect in Europe and Imago, several of its members now occupy an important position in that organization.

Zarina , Nina, Karim Allnour and you enjoyed wonderful times with André ,at others times more difficult , not always obvious but you loved him, supported and understood him, we also thank you with all our heart .

In recent years, you were tired, but your stubbornness and your generosity meant that you never gave up. Internet has taken a major place today and was probably not your best friend, so you deserve to go sailing on calmer seas with confidence.

We try to take over , not an easy task, and we will miss you .