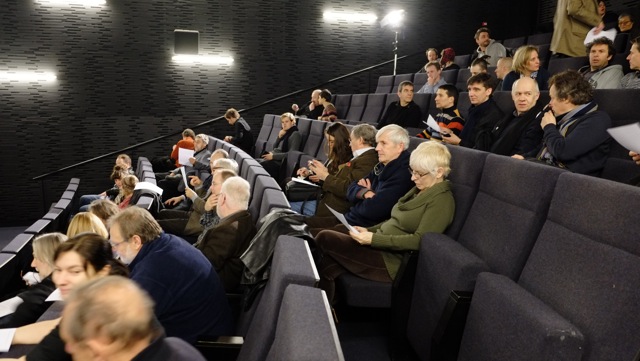 Around forty delegates were welcomed at this years Imago meeting held in Brussels and Mons. The organization was handled by the SBC in cooperation with the Batc Hainaut, and the help of our sponsors: Lites, Eye-lite, Transvideo, K5600, Sony and Dejonghe Post Production.

All Societies in Imago are to be welcomed as full members with voting rights following a unanimous decision, at an historic meeting of forty delegates in Mons, Belgium to allow amendment to existing statutes. The Belgian IAGA voted Societies formerly classed as “associates “outside Europe the opportunity to join as full societies within the Federation, upon payment of annual membership fees. They are to be entitled to full democratic voting rights with the only proviso to be included in the new statutes that the President remains a European.

After twenty years existence Imago has developed into an international organisation representing cinematographers globally. Following the Presidents’ opening remarks Imago’s forty-eighth member was unanimously welcomed by the delegates. Membership of the Society of Bosnia and Herzegovinian had been proposed by Bambic Pedrag of the Serbian Society. The Statutes of the new Society under their President Mustafa Mustafic, had been approved by the Imago Board and their representative Sahin Sicic thanked the assembly for their confidence and spoke of the pride felt by the Association of Cinematographers of Bosnia and Herzegovinian(ASBH) in the invitation to join Imago.

In his opening address the President, Nigel Walters BSC stated the intention of the Board to recommend a change in the beginning of the financial year to enable the Imago Annual Conference (IAGA) to be held at Festivals and venues such as Camer image in Poland. A shortage of time later prevented discussion on this issue, the logic of which has been repeatedly highlighted without any written objection. At present the statutes state that the IAGA has to be held no later than six months after the end of the financial year. This excludes a general desire to hold it later in the year. It is probable that an Extraordinary Assembly will be held in Camer image in November 2013. The Croatian delegate Goran Mecava is exploring the possibility of his Federation hosting the event in Zagreb or Dubrovnik in October 2014.

Imago passed a resolution to assist Marek Jicha and the Czech Society (ACK) further their proposal to introduce quality control of the image in digital restoration. This they have named Digital Restoration Authorizate (DRA). Without a carefully formulated method for restoration, significant risks remain to the quality of the preservation of the images of the cinematographer. Over 90% of European Heritage is still not digitalised and currently locked away in cans in archives. Cinematographers have an important role to play in future restoration and the ACK is leading the battle to ensure the preservation of the technical quality of professional cinematography.

In his opening remarks, the IMAGO president had stressed the importance of all Societies encouraging a younger generation of cinematographers. Imago reacted by appointing unanimously a new Board member, Elen Lotman ESC, President of the Estonian Society. She joins Birgit Gudjonsdottir BvK as the second female Board member.

A new system of deputy Board members was welcomed. It has been introduced by the Board to improve communication within Imago. The first agreed “deputies” under this system are Pedrag Bambic of the Serbian Society, to stand in for Ivan Tonev BAC and Timo Heinanen FSC who will assist Elen Lotman. It is also hoped that the Czechs will promote a young cinematographer as “deputy” to the BvK Board member. It is also intended that two Societies from outside Europe which have paved the way by actively assisting Imago committees in the last years, Australia and Israel, will also participate by helping one another and other full members by adopting the “deputy” system. The Spanish AEC, under their President Porfirio Enriquez are exploring ways of closer collaboration with the excellent Societies of South and Central America. The other Societies who have instantly volunteered to become full members of this truly international brotherhood of cinematographers are Canada, Japan and New Zealand. More are expected to join in the near future.

One outstanding feature of the 2013 IAGA was the organization of the Belgian SBC, under their President Willy Stassen. Without sponsors little would have been possible and Imago is grateful to the manufacturers Sony, K5600 Lighting and Transvideo. The Belgian Post production facility of De Jonghe also provided the charming conference Moderator Katt De Jonghe. Gratitude is also due in no small measure to the Cinematek in Brussels, where an inspiring speech by the curator of the Museum, Nicholas Mazzanti on digital restoration set the standard which followed in the excellent debate “Driven by Creativity”. It was moderated by Kommer Kleijn SBC with participation by Christian Berger AAC, Benoit Debie SBC, Danny Van Deventer and Sean Bobbitt BSC. Young Anton Mertens SBC was responsible for this event. To him great credit is owed.

The IAGA itself was conducted in the unexpectedly beautiful city of Mons which is scheduled as the European City of Culture 2015. Considerable assistance was given by BATC Hainaut and Marc Bossaerts . A Gala Dinner was offered by “Cinema Made in Wallonia” at which Sony demonstrated their latest digital cameras. The success of this happy event had been driven by the indefatigable energy and determination of Louis-Philippe Capelle SBC , General Secretary of Imago. He was assisted by Ursulla Piller, members of the SBC and staff of the Hainaut BATC to whom Imago is most grateful.

As a footnote the general amusement at the invention by the Czechs of a new word in the English Language , “authorizate” paled into insignificance at the laughter which erupted when your President thanked the “President” of Belgium after his unexpectedly arrival at the Iaga. There were many Presidents in the hall and it was not difficult to be confused. Fortunately Prime Minister Elio Di Rupo gently pointed out with a smile that Belgium still possessed a King and he instantly demoted himself to the role of Prime Minister. The IAGA ended with happiness all round. The participating Presidents of the Societies of Japan, Australia, Canada ,Spain, Holland, Belgium, Estonia, Russia, Czech Republic, Romania, Bulgaria, Latvia, Sweden, Denmark , Greece, Austria and Norway could sleep easy in their beds.

Imago and the profession of cinematography were honoured by the visit of the Belgian Prime Minister. February also witnessed the first ever visit by a French Minister of Culture to the AFC’s Micro Salon. It was a memorable month for the Federation: the phrase “Best Ever” also was used to describe the young Swedish Festival in Gothenburg, the GoKinema, which grows in stature and support year by year, fuelled by the indefatigable energy of its young founders and staff. 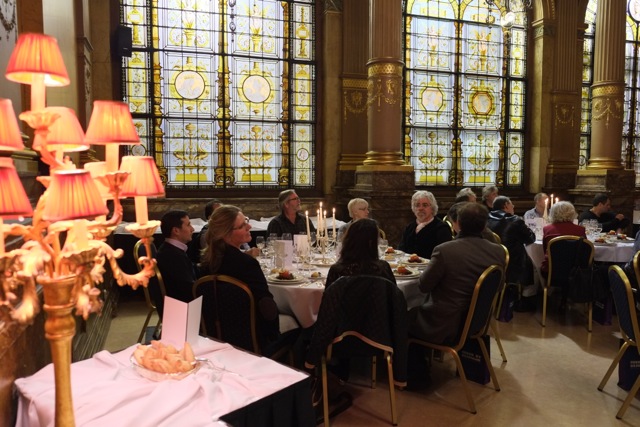 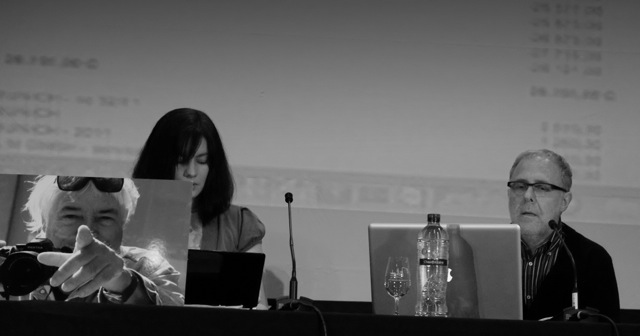 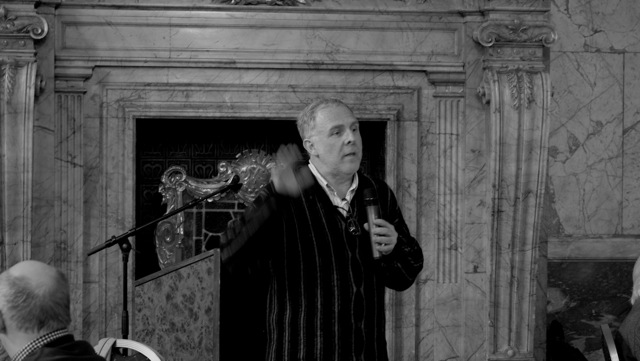 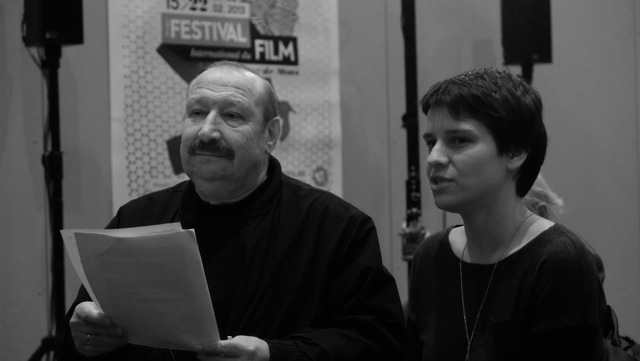 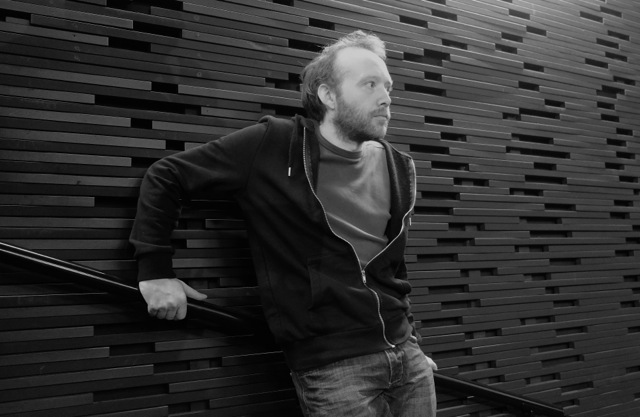 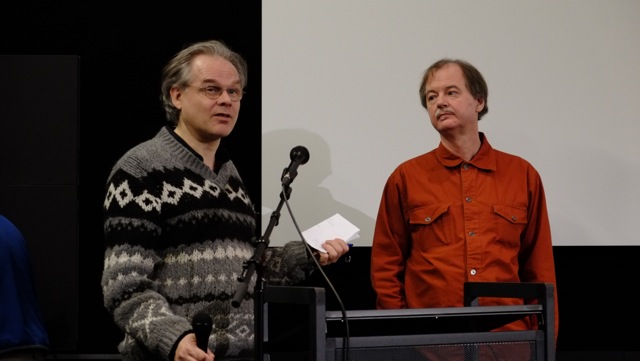 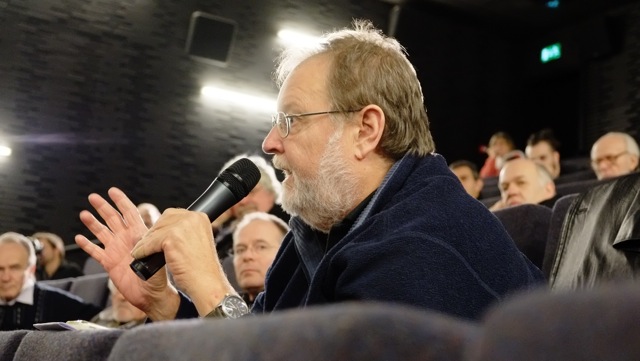 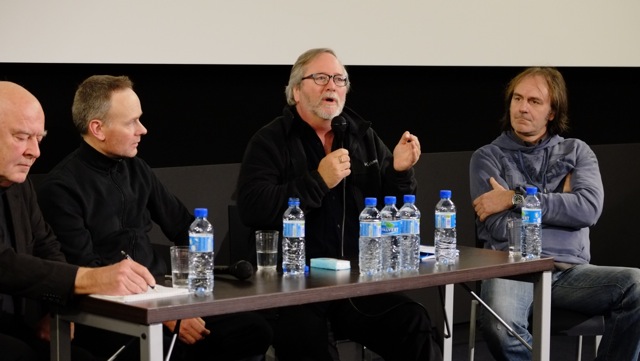 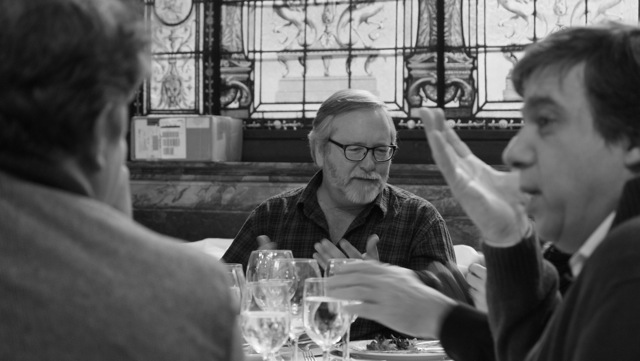 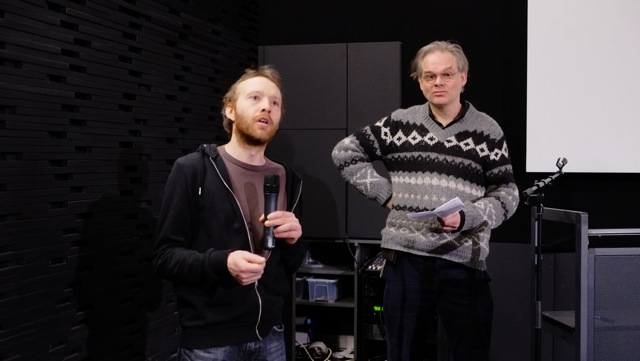 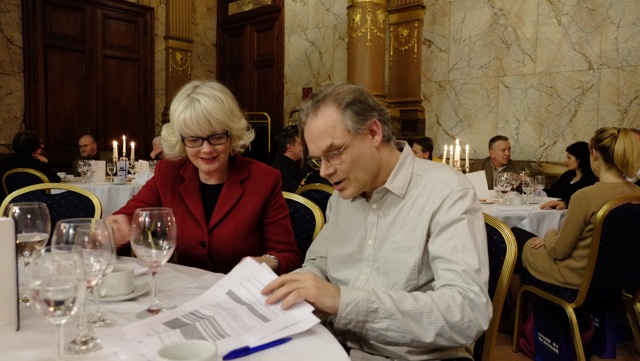 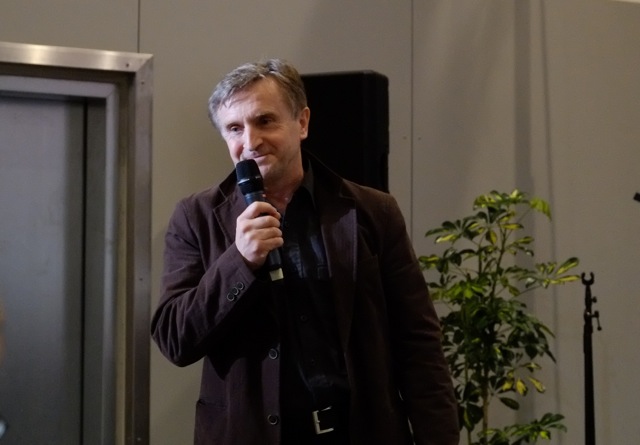 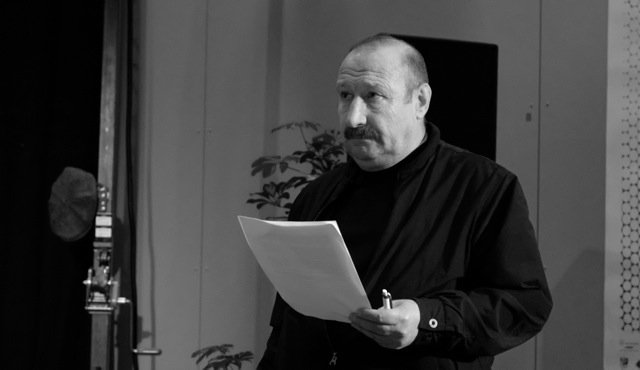 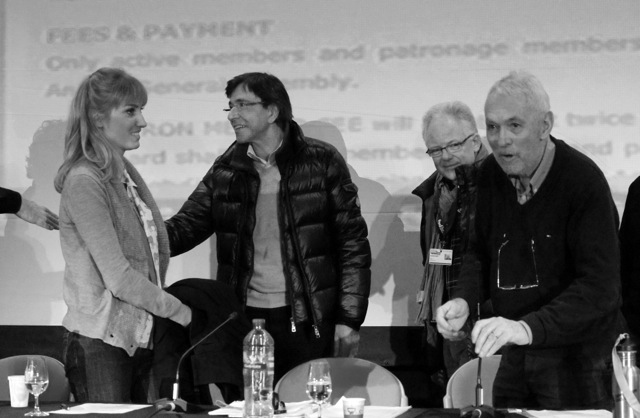 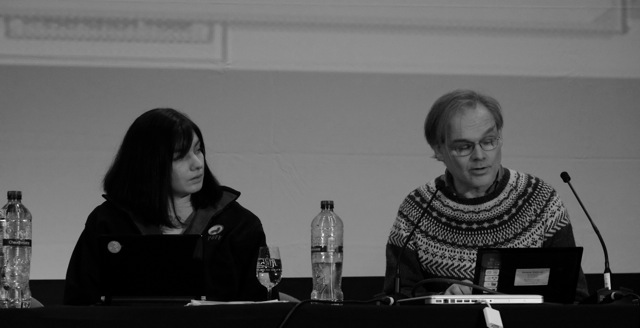 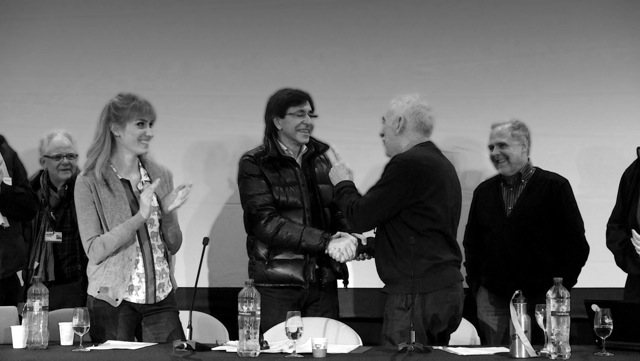 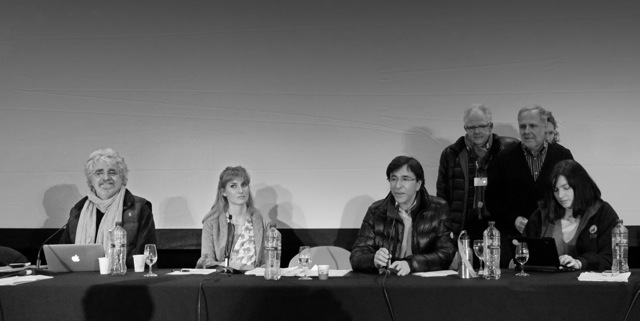 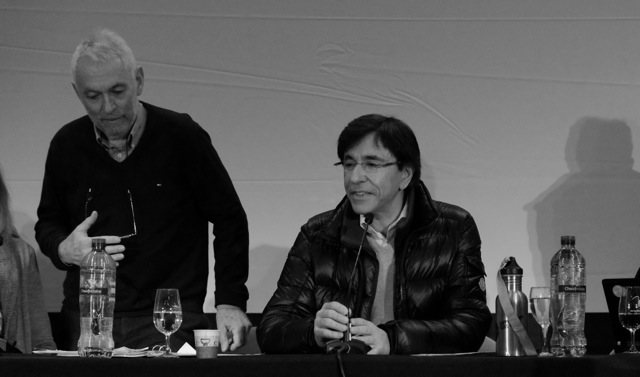 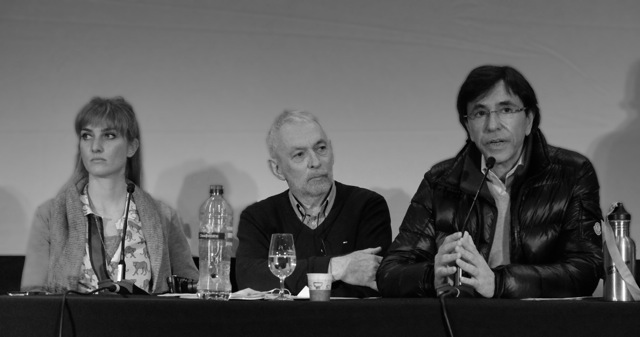 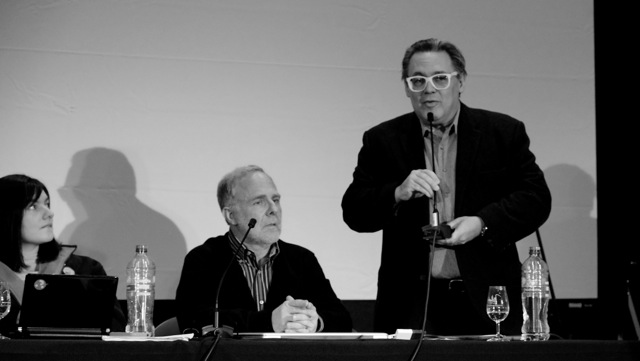