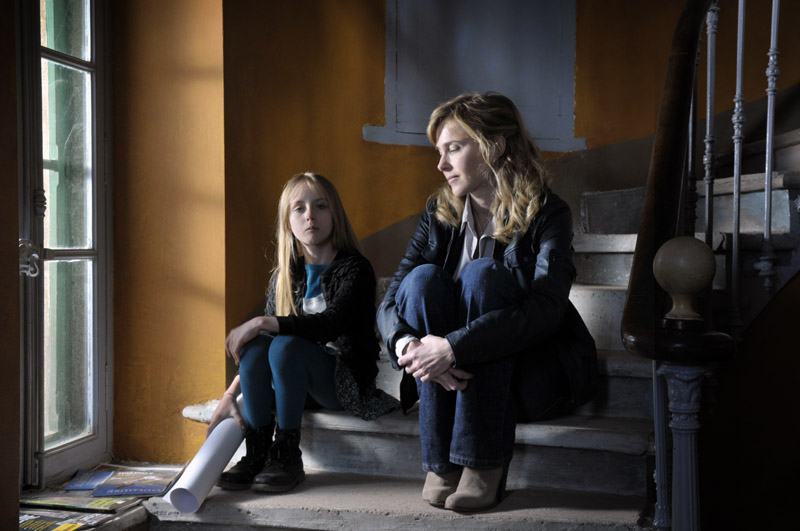 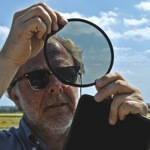 Olivier Peray is a director with whom I had shot two other tv movies a couple of years ago using super 16mm. This film was originally written as a feature film but in the end got financed as a tv movie, still keeping in mind that we wanted to achieve as close as possible the quality of a production for the big screen.

The film with its dark and oppressing atmosphere takes place in the South of France, in a large house at the borders of lake Thau. It tells the story of a girl who is suspected to have killed her aunt. As this strange girl lives in a world of manga comics, drawings had to be made for the film to be used in certain scenes: either to start from them and go to the real world or the opposite and start from a shot of the film and transform it into a drawing in an album.

In order to chose the format on which to shoot on I showed Olivier different examples of digitally captured images: hdcam 900, F23, F35 and the Red One. After a blind test screening of dvd’s it became clear that he preferred the texture of the Red. So I shot the film on a Red in 4K Raw 16/9 using redcode 42 compression.

A post-production pipeline was determined: editing on an Avid, syncing the rushes using a traditional slate, a conform of the original files and a grading on Scratch in 4k at L’équipe in Paris. On the set we had a Mac Book Pro and a raid 2TO backup disc, so every night the 2nd assistant made a copy on our disc and checked the backed up files before sending the original Red flash cards or hard drives to the post-production in Paris, where another backup was made before ingesting the rushes for offline editing. The post house was also responsible to facilitate the director, production and tv station with dvd’s of the rushes and to make the vfx of the film.

As the Red has poor low light capabilities, I suggested to test a Canon DSLR for some of the scenes shot at night on the water, the beach and in a car driven at night. My one condition was that the Canons needed to be adapted to our way of working: a Pl mount, cinema style accessories and monitoring…and of course have the ability to shoot 25 fps. At the moment ( but maybe more in the future) Canon has 3 models able to shoot 25 fps at a 1920x 1080 resolution. The 7D is equipped with a 24 x18 APS sensor so 35mm lenses are a perfect fit for it and we can use the focal lengths we are accustomed to. The 5D has a 36×24 sensor which creates some difficulties: lenses become longer, the depth of field becomes very shallow and 35mm lenses don’t cover the sensor. And finally the 1D has a sensor that is little bit bigger than an APS which makes for a +/- x 1.3 increase in focal length compared to x 1.5 for the classic APN. I don’t mention the EOS 550D here which has the same photographic characteristics, sensor and electronics as the 7D in a less solid body but at a price of only 800€ taxes included !!!

The availability of the rental company TSF made us choose the 1D. One can now outfit the DSLR’s with a shoulder mount made by Movie Tube and a color viewfinder similar to that of an Hdcam, in order to be able to shoot as one would with a small video camera. You have to take into account that when you connect an external monitor via the HDMI or the USB port of the Canon the image on the camera’s internal screen goes to black. The outputted hd , some kind of 1600x?, signal can be connected using a regular bnc to an Astro or Transvideo in order to accurately judge exposure. This combination worked very well and was a guaranty for good results. As was live viewing of the images on a monitor reduced in size but still accurate enough for the director. So now we can have a comfortable handheld configuration, lightweight and able to be fitted with all the accessories ( manual or remote follow focus, video transmitter..) we are accustomed to on 15 or 19mm rods. Syncing sound was done using the good old slate. The Canon produces H264 files( the same as a blue ray) that have a .mov extension so they can be played using Quicktime. 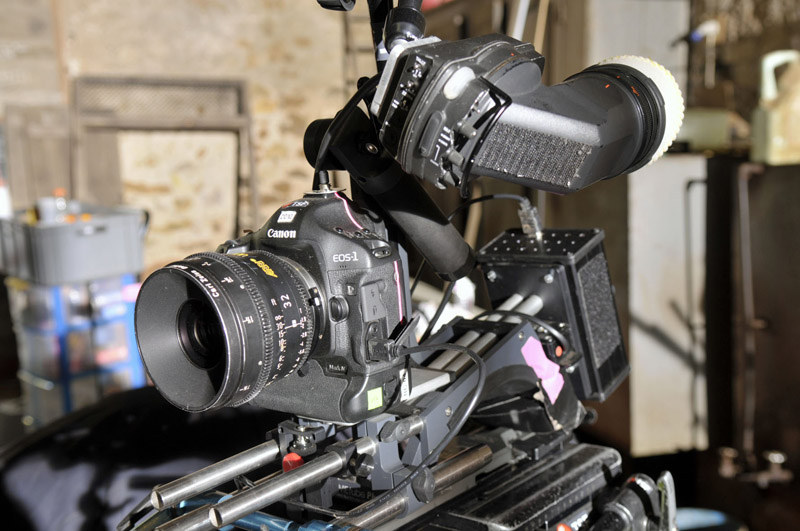 Before shooting began I did some tests with the two cameras individually, in order to find similarities and their limits towards grading and postproduction. The key-light tests of the Canon revealed that the image captured in still mode ( raw or jpeg) was very similar to the one in cine mode, which was very reassuring. Exposure tests showed that the factory indicated nominal ISO of 200 was actually more like 160 ISO. With DSLR cameras you have to work with ratings that are a multiplication of 200 ISO, as all other variations like 160 or 320 are calculated in a less precise way as the native sensibility is 200ISO. The captured dynamic range on the other hand is limited, I would say hardly 1.5 stops in overexposure and 5 in under exposure, with the possibility to correct images underexposed by 2.5 to 3 stops. The dynamic range is mostly limited by the H264 compression as it is 8 bits 4:2:0.

So I shot scenes at night,handheld, in a car using the cards at 400 ISO, the resulting images had remarkable brilliance to it as are the street lights. The rolling shutter artifact was visible but not disturbing. Anyway this problem of bending vertical lines caused by fast horizontal movement, is something all CMOS sensors that don’t have a mechanical shutter suffer from. A software from The Foundry can fix the artifacts in post, but I haven’t seen it in use yet. Aliasing is another visible artifact, which manifests itself in the transitions between the bright and dark zones of a moving image with strong contrasts. But again this is not always visible but one should pay attention to it.

Using the Red I chose to have the output path to the viewfinder, the astro and the 24” cinetal reference monitor set to RAW, with the option to switch to a rec709 LUT when needed. In the end everybody got used to seeing the desaturated, low contrast RAW image, and even finding it pleasing. The big advantage is to see what is being recorded, so no unpleasant surprises there afterwards. No color variations either, I shot the entire film at 200 ISO and at 5600°K, the default values of the camera.

The first dvd with dailies we got was a catastrophe: everything was pitch black. You could hardly see the windows in the set. Some anxiety, so quickly we opened the files that stayed as backup on the set, applied a LUT and everyone was reassured. Consequently I sent a scene to the post-production so they could apply the same setting to the rest of the rushes for the remainder of the shoot. So no unfortunate surprises anymore.

The Red camera itself performed well, the dual battery adapter ( leave one on it when changing the other one) did not work well. So you always end up with a 2 minute wait to power up after a battery has been changed. There is a new system by Bebob that seems to be more reliable. Also there were some problems with the viewfinder which on occasion switches by itself to false color mode. This seems to be caused by cold temperature. A couple of times we had an audio warning, even though we weren’t sending audio to the camera!!. So every-time this happened we checked the disk and the recorded files seem to be fine.

Even though I got used to the viewfinder image, and even found it to be pleasing, it was not well suited to judge focus. I want to point out at this moment the excellent job the assistants did using this difficult format. It is absolutely necessary to use a decent size reference monitor ( 24”) so the 2nd assistant can judge the focus during the take and report back to the first (using an intercom). It seems that despite shooting at f-stops like 2.8 or 4 on the Red, shots can quickly appear soft when not precisely in focus, certainly when one uses lenses like the Ultra Primes. Another point I would like to make is the additional workload the 2nd assistant is charged with at the end of the day and sometimes even during lunch breaks, making backups and doing random checks of the footage on a laptop.

This leads me to a more philosophical point: tv movies were originally intended for the small screen, shot on S16 being a more forgiving format at wider apertures. Today equipment has evolved, we use the latest 35mm lenses with the intent of having less depth of field but there are less shooting days ( 22 has become a maximum for 90′), more freedom and no or almost no blocking, little or no rehearsals or set up time, and actors of a generation that find marks to be unacceptable making the work of the focus pullers more and more difficult. So they are submitted to a pressure that even modern tools like the Cine Tape can’t help to lighten. The rigor of their job starts at their education and I believe that this new development should be taken into account, to warn them and to teach them ways of working in order to limit their stress. Even a slightly out off focus shot will not ruin the film if actors and script are good.

Notes after the shoot:

I ran some extensive tests at Eye Lite with the Canon 7D and some other stuff:

– an new solution for getting better images from HDCam (900R for example) is to use an AJA KI PRO as video assist- combo and record simultaneously on APPLE PRO RES 422 10 bits , it is cheap and you get a better quality recording system than the HDCAM (Compression 311/ 8 bits) and a good on the set control without manipulating the tape

– tests are being done with the Canon 7D and recording separately on an AJA KI Pro, the signal from the HDMI output. Theoretically it is possible but: this output in all the DSLR is fixed at 29,97fps even if shooting at 25fps!!! Then you have the “foci” square in the middle of the screen, this you can eliminate by shooting at the same time on the flash card, then you have de “rec” red dot which is at the edge of the 1, 85 frame. The output is also not fully HD( some 1600X1000) but there is a program that could fix all that, from Syndicate Sweden. It up-converts the images to 422 and even some kind of 444 at the right fps) but then You need a Matrox graphic card to ingest the pictures.

So as You noticed, all this is not so straightforward even if is very appealing. Any other news or suggestions are of course welcome.