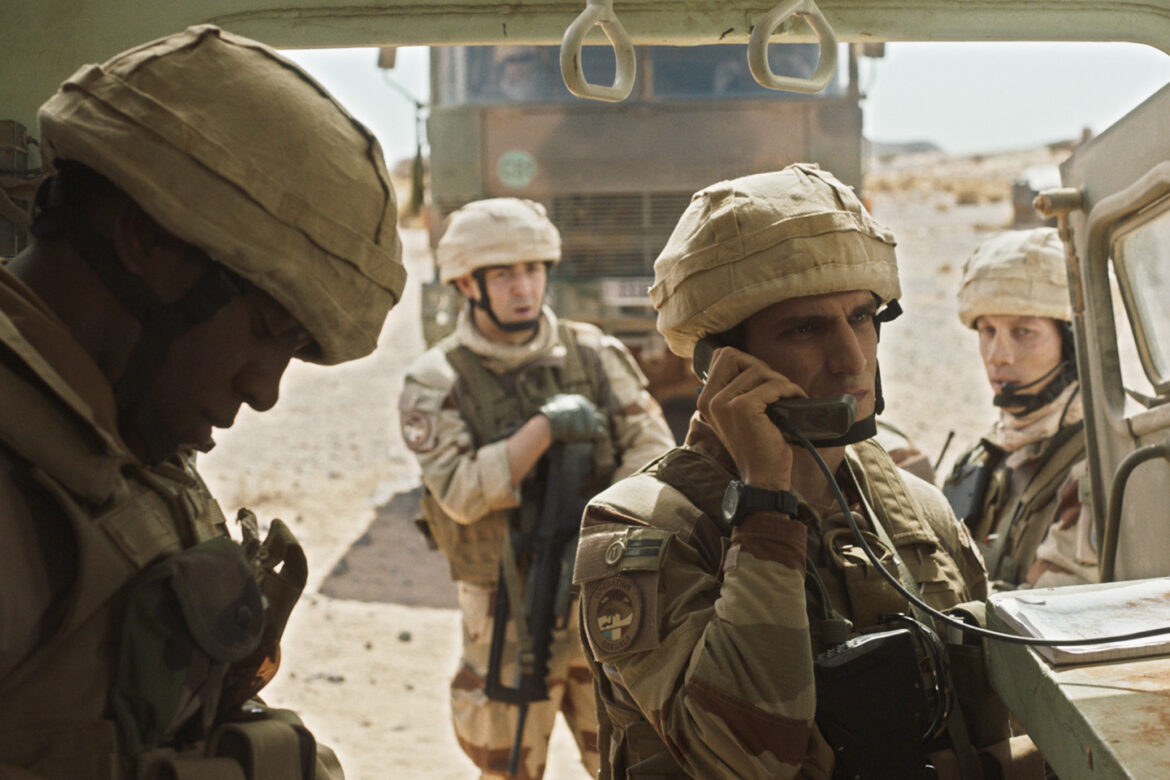 Fiona Braillon began her career in cinematography together with Rachel Lang,  a young Belgian director. After graduating from the IAD (Institute of Broadcasting Arts) in 2010, Fiona Braillon signed in 2016 the cinematography of Rachel Lang’s first feature film, Baden Baden, then, four years later, that of My Legionnaire. This film was selected at the Directors’ Fortnight of this 74th edition of the Cannes Film Festival.

Families and couples are faced with the harsh reality of the Foreign Legion. These couples sometimes build themselves in hostile territory: men fight for France and their wives struggle  to keep their love alive.

An atypical experience for a film that sounds true

Fiona Braillon: Rachel Lang joined the army’s operational reserve at the age of 20 while she was studying philosophy. From this experience, she wrote her first short film, Pour toi je ferai bataille, the first of a trilogy on the transition from adolescence to adulthood. After film school, she directed a short film Les navets blancs empêchent de dormir and then her first feature film Baden Baden.

To write Mon légionnaire, she met regularly with the wives of legionnaires in Calvi, Corsica.

Rachel is interested in the little things of everyday’s life for the men on mission: the laundry, the washing, the waiting, the sleeping facilities, the protection from the sun or the heat, not the war situation in itself.

FB : I don’t like to make one film after another like I did before. Having the time to immerse myself in a story, in an universe, meeting the people I’m going to work with very early on, all this immersion time allows me to build a common universe. Then, on the set, when I have to move and make choices quickly, I have reflexes not linked to my way of doing things, to my habits, but linked to the universe of the film. With Rachel, it’s a bit special, it’s the fourth film we’ve shot together, we know each other well. We need less and less words to understand each other.

For My Legionnaire, we made the shots list a year before the shooting. This step was just a solid base to work from, but we can completely deviate from it too. It evolved during the location scouting, because Rachel’s new ideas came up when we chose the locations, and it evolved again during the shooting.

FB : We shot in Corsica and in Morocco. Corsica is where the soldier’s wives live.

Given the geopolitical context, it was not possible to shoot in Mali, so we set the scenes telling the story of the men’s mission by shooting in Morocco for Mali. We wanted the women’s side to be colorful, Nika (Ina Marija Bartaité) to be alive, to feel the unity of tgroup, of these women forced to live together. A large part of Corsica is filmed with a camera on stick to have a more settled, stable, solid feeling.

In Morocco, we wanted to tell the story of the solitude and isolation of the men. They seem to be in a group but in the end, they are all alone. We wanted a monochrome image, the sets and costumes were designed with this in mind. The yellow of the sand contrasts with the blue of the sky. This part of the film is shot essentially hand held to convey the fragility of the men.

The Foreign Legion did not allow us to shoot in Calvi, a seaside resort where the Foreign Legion regiments are “based”. Perhaps the film is too critical of them… So we shot in Saint-Florent, a mountain town, and in the end, this location gives more character to the image, suggesting the idea of the women’s confinement on this island.

The scenes in the desert, the sun, the dust and the texture of the image

FB: We had to shoot a brief sequence that takes place during the sunrise. It was easier to shoot at sunset. All the shots were prepared beforehand, we rehearsed for two hours to be able to shoot the seven shots in only forty minutes. Afterwards, there was a lot of work in color grading to show the evolution of the sun as it rises.

For another scene, this time at night, the headlights of the vehicles lit up the characters. I enhanced this effect with Red Heads and PARs. We had little power on set. The idea of shooting in Morocco was to be very light, I had two SL1s on batteries, neon lights and flashlights.

I also shot in Alexa for its texture, which I like, and I used it at ISO 1,600 for the Moroccan part, to recover the “grain” and have another texture. I filtered the day scenes with Glimmer Glass filters and with Black Promist for the nights in the desert.

The choice of lenses for a realistic image

FB : I don’t have any preconceived ideas about the lenses, I like to choose them according to the film. I test lenses for each film. At the time of the tests, I tried more round and soft (vintage look) lenses like the Baltar’s, the Cooke’s, but also the Leica R’s. Rachel preferred the Leica R’s for their very straight, unadorned rendition. We finally took six Leica Summilux lenses (PL mount) because the Leica R’s were not in PL mount and the set did not have all the focal lengths needed for the film. We would have had to match the two series but we would not have had the time to change the mount at the time of shooting.

The colorist, the painter of the narrative

FB : We did the color grading with a great colorist in Belgium, Peter Bernaers. He works on the image by small touches, like a painter, while being very sensitive to the narrative of the film. We were very attentive and demanding on the texture of the image. Although I prefer to make as many choices as possible at the time of shooting, color grading is an important moment for the overall perception of the film’s image. That’s why I’m sensitive to the person who does the color grading with me and it’s important that we have a common vision.