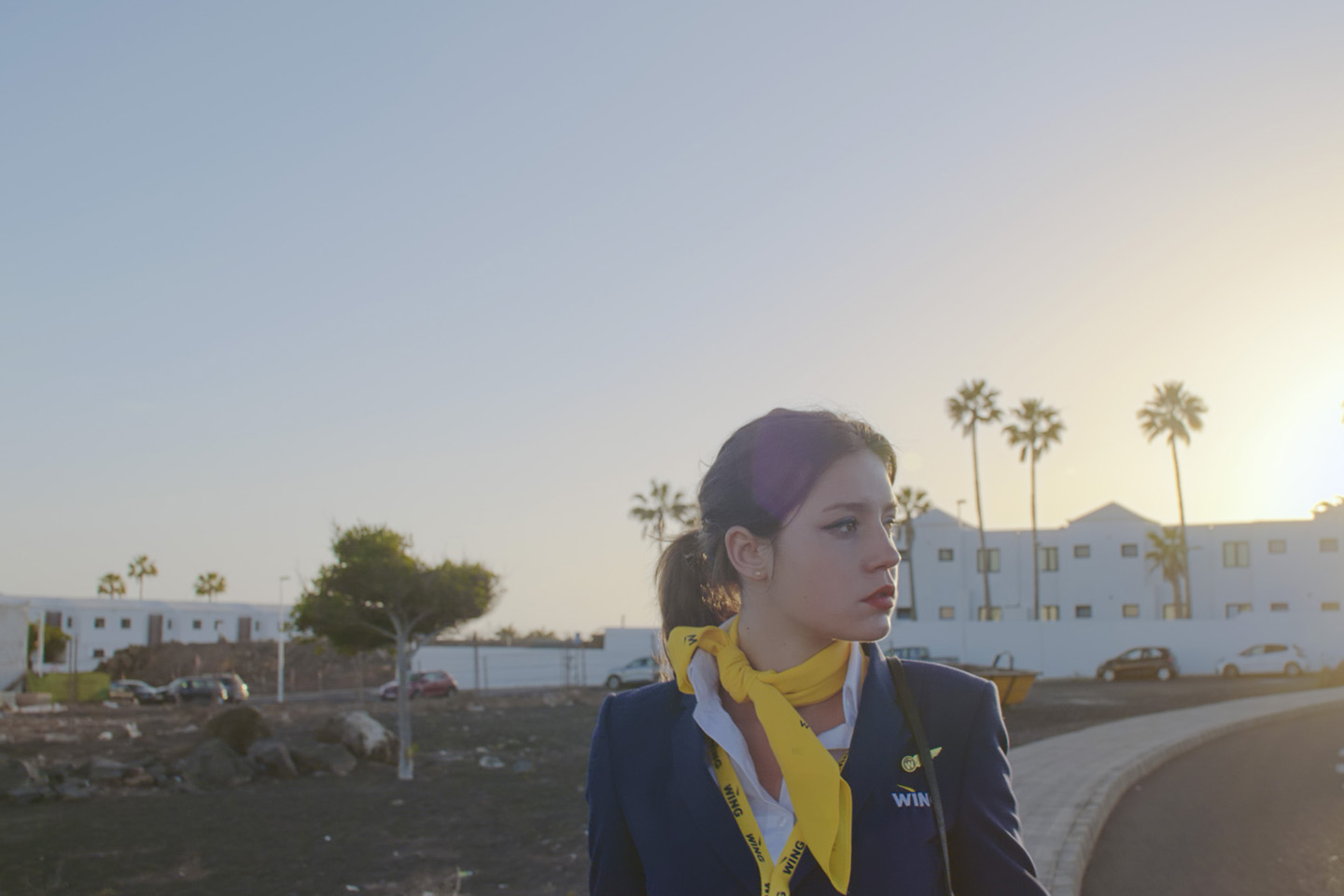 Always surprising and prolific, Belgian cinema sends this year to the Critics’ Week a very nice portrait of a young woman played by Adèle Exarchopoulos. Rien à foutre (which was called Carpe Diem when it was filmed so as not to scare people!) is also a dive into the ruthless world of low-cost airlines.

Julie Lecoustre and Emmanuel Marre – the two directors – “did a lot of research on the subject”, explains Olivier Boonjing, the film’s cinematographer. And the work went so far as to recreate a fictional airline, whose uniforms, logos, and slogans were made by a team from the advertising industry. “The costumes were so realistic that I remember a misunderstanding at the Madrid airport when real Ryanair’s stewardesses saw Adele arrive in her Wing outfit,” Olivier says with amusement.

With filming planned between Belgium, the island of Lanzarote (in the Canary Islands), and Dubai, the team had to find pragmatic solutions very early on to deal with the numerous flight or transit scenes. “As it was impossible to ask a real company, we first asked ourselves the question of moving a plane in a shed and cheating the sequences in studio conditions. Then we realized that it wouldn’t be much more expensive to literally charter a flight, via a charter company.

That’s how we shot the vast majority of the sequences inside the plane, as well as many additional sequences by taking advantage of the tarmac, the connections with the airport, and lots of little things that we couldn’t have had in the studio. To make the operation profitable, we simply offered free tickets to fill the plane with extras, with people being offered a ticket from Paris to Barcelona and then Barcelona to Paris in exchange for being in the film!

Influenced by Harry Gruyaert’s photographs, and in particular, his book Last Call, which takes airport waiting rooms as its theater, the directors also decided to shoot some sequences without authorization in these places. “The idea was to look like tourists most of the time,” explains the director of photography. “Shooting with a very light crew, sometimes just me with Adele equipped with an HF mic, while Julie and Emmanuel stood at a distance with a little Accsoon CineEye WiFi feedback on their phones, surprisingly good. For this, we chose to shoot with the Panasonic S1H camera which, in terms of discretion, was the solution. This camera had two great advantages for this film: its incredible sensitivity, and the quality of its embedded recording solution (4.2.2 10 bits internal in H264 intra). By using it during location scouting, and by calibrating the dailies myself from the Panasonic VLog, we were able to determine very quickly where the film’s cinematography was going.

After The Summer Movie, in 2016, Nothing to Fuck with is the second collaboration between the cinematographer and the directors. “As with the previous film,” explains Olivier Boonjing, “we prepared and thought about the film quite a bit beforehand. Among the things to be determined was the basic focal length that will be used for most of the shots in the film. As the S1H camera has a Full Frame sensor, I was originally thinking of going with a 28, 35, or 40 mm… But then Emmanuel showed me some pictures made in medium format, which made me think about a technical solution to adapt Mamiya lenses and obtain on the Panasonic a rendering close to medium format. By using an adapter ring from the Panasonic L-mount to the Mamiya lens mount, with a Speed Booster function, we were able to use these lenses on almost all their coverage. The geometrical rendering of the focal length becoming close to the one you can get with an Alexa 65 sensor! And in these conditions, it is the 45mm Mamiya that we selected as our reference lens.

For some sequences requiring close focus or wider aperture, the cinematographer also used on the Panasonic camera some Canon FD FF lenses from the 1980s, as well as Canon LTM ultra-compact lenses (intended for the Japanese brand’s rangefinder cameras during the 1970s). “By equipping the camera with Canon LTM lenses, you really feel like you have a camera with you. I was able to use this configuration in bars in Lanzarote, for example, for footage that was shot mostly without any authorization, with the people around us thinking I was just a local videographer.”

Among the bold sequences in the film are those of the heroine’s sex shots via the dating app she uses at each stopover. “On these sequences, Emmanuel dreamed of shooting with a rendering that mimics photos taken with a flash. Among the references, there was of course the photographer Nan Golding or Martin Parr. It’s an idea he had for a very long time, I think since his film studies, but at the time everyone told him it would be pretty awful!

I decided to take him at his word and did some research to see if any operators had dared to do something like this in films. Not many examples, except maybe a music video for Fiona Apple, lit by Harry Savides at the time, where I found out that he had lit with a very small halogen bulb placed above the camera. The bulb was so small that we even had in the clip the red-eye effect characteristic of flash photos! As far as we were concerned, the halogen era was a bit over and I found a very small mono LED (a Lume Cube) that I diffused lightly and installed on a dimmer so as not to dazzle the actors too much. The sequences were shot at around f4 at ISO 10,000, with the Speed Booster allowing me to gain one stop in relative sensitivity.

Another sequence that stands out in the narrative is the one where Cassandra receives a phone call in the street from the Orange customer service department offering her to upgrade her package. “This is one of the sequences that were shot in the street, with me alone with the camera filming Adele. We used the 35mm Mamiya, to be as close to her as possible, and to avoid any suspicious looks from passers-by. On this subject, but it was recurrent on many other shots in the film, the camera was simply hand-held, without any grip or stabilization system. Only the sensor stabilization was engaged, and the result is quite stunning.”

Throughout the plot, the off-camera is also an element of the mise en scène. As in the scene of the storage of the archives. “Julie and Emmanuel and I like to find practical elements in a scene and, little by little, transform them into stylistic elements. From the beginning of the film, for example, the authority of the head of the cabin is shown through the sound, we don’t frame it too much. Later, during the training, it is the same. The trainer is off-camera and gives her instructions, her remarks. In the sequence where the father decides to clear out his daughter’s room, which has become an archive room since she left, we deliberately chose to shoot on a single axis. At first, Emmanuel asked me to follow the actors a little bit… but not too much! And then finally, we realized that we had to remain almost still and see them move and leave the field to better conclude the scene.

A lot of things were tried on this film, recalls Olivier. “I wouldn’t say that we were in a perpetual “Fuck it” mode on the set. But we were in the “Nothing to fuck with to miss”. That is to say that we didn’t hesitate to redo this or that sequence if we didn’t like the rushes. We shot a lot, sometimes five or six hours of rushes per day, and inevitably, many scenes – although very successful – were not retained in the editing. The atmosphere was great, Adèle Exarchopoulos amazed us with her talent and her kindness at all times.

Interview by François Reumont, for the AFC-translation Louis-Philippe Capelle, sbc