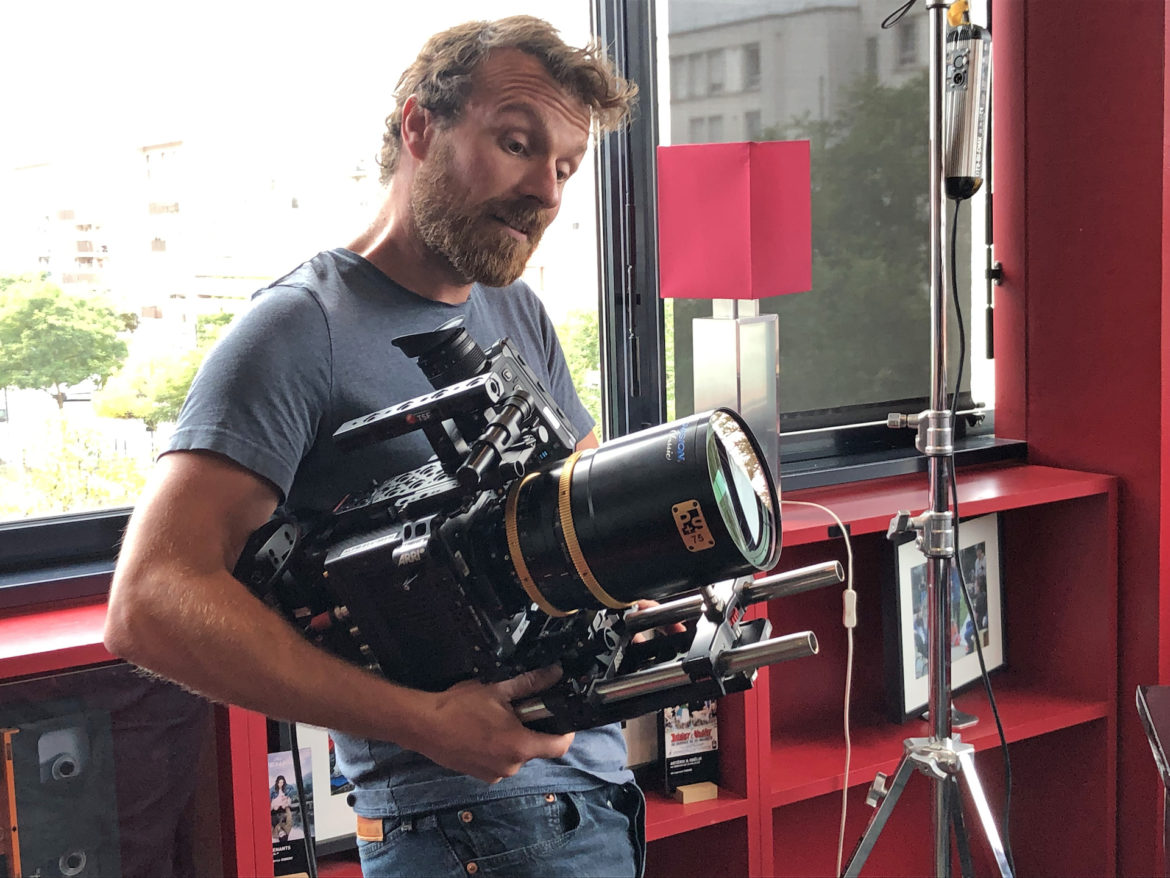 Christophe Nuyens SBC is currently shooting a series produced through Gaumont in Paris.

Christophe Nuyens SBC: We have the Technovision Classic 40, 50, 75, 100 and 135 mm Prime and the 40-70mm zoom. I was looking for interesting lenses for the show I’m shooting right now, and we decided to work with Full Frame anamorphics. That’s where it became complicated because at that moment there were not a lot of Full Frame anamorphic lenses. I tested the P+S Tech- nik Technovision 1.5x Anamorphics and found them to be beau- tiful. They have a really nice vintage look.

They have a little bit of distortion, but they’re really beautiful. Es- pecially the 75mm. The thing that’s really nice for my project is the squeeze factor of 1.5x, which helps me in the end to have a 2:1 aspect ratio for release. (1.5 x 1.5 = 2.25:1 and then crop the left and right sides to 2:1 in post.) So I’m using almost all of the Alexa LF sensor.

So tell us about the cameras.

We’re using two ALEXA Mini LF and one ALEXA LF normal, so we’re shooting in Full Frame. During pre-production, I watched Apocalypse Now, on which Vittorio Storaro ASC AIC used original 2x squeeze Super35 Technovision lenses. When I’m shooting now, sometimes I see exactly the same flares. P+S Technik did a really good job recreating the look of the original lenses in these new ones. You can control the look of these lenses. If there is too much flare, you just close the iris down a quarter of a stop and it’s gone. They’re easy to control.

What is the look you were looking for?

We’re shooting everything in Paris and it’s contemporary. We had to look for something that helped to get a distinctive look for the show. Also we have a tight schedule and the director likes to shoot a lot of coverage, so I have to light for almost 360 degree coverage. So we needed lenses and cameras that quite easily give a distinctive look and the lenses are helping me a lot with it.

You mentioned that the look is different from anything else. How would you describe it, either in technical or artistic terms?

They have a sharpness as well as a soft fall-off and also there’s a bit of aberration in the corners. They flare nicely when you want them to. I love those imperfections especially on a big sensor camera. This is my second time shooting Large Format. The first time I used vintage spherical lenses and I thought even then it felt a little bit too sharp. I think it’s a good combination of lenses: ALEXA LF or Mini LF and Technovision Classic. We had a lot of locations, like the Louvre in Paris, where we were not allowed to use smoke. But shooting wide open, they give a slightly smoky and soft feel and that helps me a lot.

The director is operating one camera. As the DP, I’m operating the other. I monitor both and can switch from one to the other with my onboard monitor. We’re shooting with two Minis and one normal LF. I’m shooting with the normal LF, because it can go up to 90 fps. The Mini goes to 40 fps. So, we have two cameras shooting and the third camera is used to prepare for the next setup, because we really have a really tight schedule and we have to leap off from a crane to a Steadicam to something else.

Who is supplying the equipment?

The equipment is coming from TSF. Danys Bruyere organized everything.

I spoke to Danys Bruyere the other day and he said that almost every show is now shooting Full Frame. Why did it suddenly take off in France?

I think because of productions for the streaming services.

How many sets of Technovision lenses do you have? They are very new and probably building them as we speak.

We have two sets. We started with one and a half, actually, because they are so new. But I liked them so much, we worked that way for a couple of weeks and then P+S Technik worked really hard to get us the rest of the second set.

Do you have zooms?

Christophe: We have one 40-70 Technovision zoom. But on the Alexa in Full Frame, it covers only from 48mm or 50mm at the wide end. I use it a lot on the crane. It’s also a beautiful lens with really close focus. Even closer focus than some of the primes. [Editorial update: Gerhard Baier says that P+S Technik is working on a modification to fully cover from 40mm.]

How do you get really close with the primes?

Christophe: We use Diopters a lot of the times. They are also beautiful and work quite well with the lenses.

A number of colleagues were wondering about bokehs with the 1.5x anamorphics.

The Technovision Classics give us beautiful bokehs. The bokehs in Apocalypse Now resembled these quite a bit.

How do you connect 2 cameras, monitors, wireless lens control?

Everything is wireless. We have ARRI wireless lens control and wireless video going to the focus pullers as well as to video village. So it can be quite a puzzle to make all those things work together.

Do you have a DIT?

Christophe: We started with the DIT and now we have a DIT and a data Wrangler because we’re shooting between 4 and 7 tera- bytes a day. So there’s a lot of data. And that’s even with the 40% reduction of file size using ARRIRAW HDE (High Density Encoding) of Codex.

From Film and Digital Times by Jon Fauer ASC — www.fdtimes.com