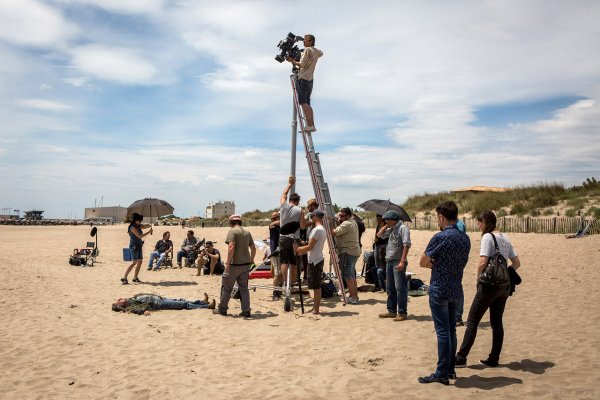 I met José during the shoot of the tv series “Speakrine”. He came to see me on set just before a night shoot, and at the sight of the number of trucks, he told me immediately that his film would be done using a small team. We met again several times before he confirmed that he wanted to work with me. He particularly enjoyed my lighting on “Le fils de Jean” and ” Le goût des merveilles”. Two films close to nature, lit naturalistic but a little stylized.

Soon enough we went down South to see the locations already chosen for the film. And immediately, I noticed that the main setting of the film, the garage and house of Gilbert (Daniel Auteuil) and Simone (Catherine Frot) had a huge potential by having a breathtaking view of Lake Salagou and space to let actors roam. On the other hand, the set was facing North.

So during prep we tried hard to block with this problem in mind of having a very high sun during a shoot in May-June. We hoped to shoot only in the mornings and evenings, the dream of any DOP. But this was obviously not possible at the production level. Thanks to these constraints, this resulted in our balance we achieved between leaving time for the actors and for lighting. I think we had a lot of luck with the weather, rather capricious in the first part of the film. Dark skies and gloomy weather but as soon as we went into the road movie part, the sun was at the rendezvous. The clouds also helped us during a long shot on the Ronin along a dune to the sea. I was anxious about having to film Catherine Frot with a very high sun. The hat that was chosen for her finally did not play its role of sun visor, given the milky but bright sky that softened this fight sequence. Jose, who lives in the area, had done a valuable job of scouting his locations. Our second base camp was in Sète, a very cinematic city. I must admit that I really enjoyed framing and lighting these three great actors Daniel, Catherine and Bernard. A high level of acting, emotion and a cordial agreement on the set. And I like add to this trio, the young Solam who was always very concentrated.

Not easy to make a lower budget movie because everything is more complicated: equipment, the team, schedules … But maybe that is what made the result what it is … A real pleasure to have had the chance to collaborate with José Alcala and Mélanie Parent, our script supervisor on blocking of this film. Ditto for the production design where François always took into account the need for lighting. As well as being supported by Mika, Jean-Pierre and Carine the small but energetic camera team.