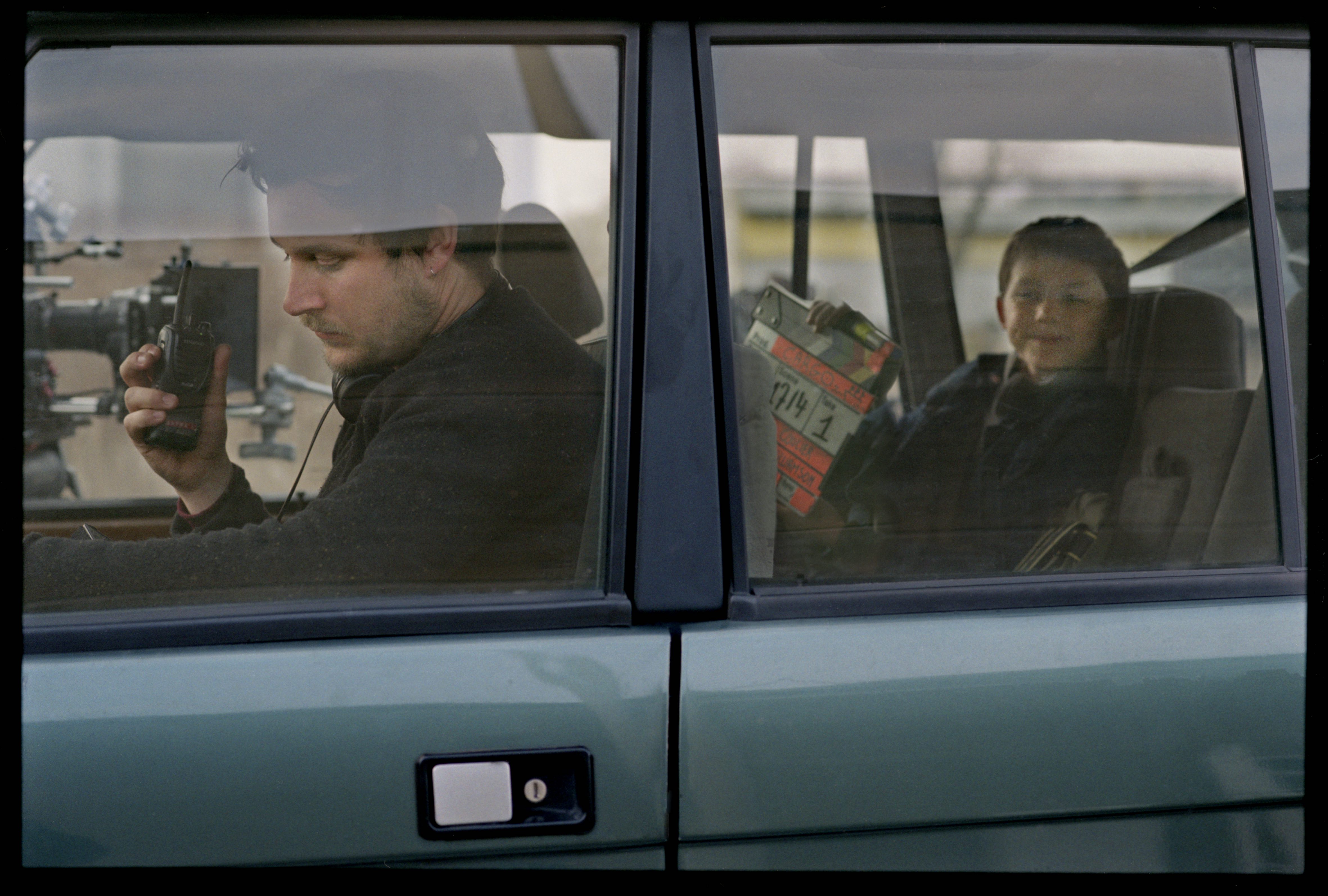 From an early age, photographer Kris Dewitte had a love for cinema.

“When I was seven years old, I was already looking at films that were not really intended for my age, but I had never thought that I would ever become a photographer” Kris recalls. “A future in film was not immediately on the horizon, it was a world that seemed so far away from me. Nobody in my family worked in film. I was hugely fascinated by the creation of images, books and magazines. And I was convinced: I wanted to make magazines and books. When I was 15, I decided to learn graphic design. In Ghent it was possible to follow this course in high school, and therefore I changed halfway through the school trimester. I easily caught up with the others and became one of the strongest in that specific field. As a seventeen year old I was already working on the layout of magazines through school or competitions”.

At the photography department of the same school, Kris Dewitte found kindred spirits such as future filmmakers Alexander Van De Putte (Lumière) and Lieven Debrauwer, who was already making short films. Because of the shared interest in photography and the fact that they met frequently, it seemed only natural that the introverted Kris would follow the same studies after his training as a graphic designer. Film was very present in his life, but photography was decisive.

His passion for the image did often bring Kris into hectic situations on set. The chaos, the dynamics of the different personalities, it seemed almost contradictory with his quiet nature. However, the combination of the energy on the film set, and the quietness of editing images, was extremely pleasing to Kris:

“because of photography I can better function in groups, as it forces me to occasionally come forward and assert my position on the set. It is not always easy for a highly sensitive person on a set, but then, due to its dynamics you can perfectly sense the right time to capture a photo of someone”.

“Once I take on the position of photographer, I forget everything around me. During the filming of Lost River, a film written, produced, and directed by Ryan Gosling, with Benoit Debie (SBC) as DOP, there were fewer people than on a regular Flemish set. I have to create a kind of energy that allows me to fully focus on my work. ”

Kris was a striking but shy young man and networking didn’t come naturally to him. However, once he had his camera in his hands, the hesitation fell away. Kris called the big names in the film industry to ask if he could take a picture.

“I had just finished my first year of photography when in the summer of 1988 Robbe De Hert made the film Blueberry Hill. Back then my photos were already related to film. When I was 19. I made my first portrait of Jan Decleir. Afterwards one of Julien Schoenaerts, and one of him with his son Matthias. However gaining access to film sets was something special. That is why I auditioned for a role in the film by Robbe De Hert. I was assigned a few days of shooting and immediately asked if I could come back to do photography. These were night shoots in the Pelikaanstraat in Antwerp. Stijn Coninx was first assistant and Yves Cape was focus puller.

“I started publishing my images fairly quickly. My set photos appeared in just about every Flemish magazine. Being published is the ultimate recognition of your work”.

Kris greatly admired, among others, the Magnum photographers, who acquired their fame through innovative set photography, like on the set of The Misfits.

“I remember – sometime around 1985 – that I saw photos in the newspaper ‘De Morgen’ that made me realize that a picture can be used in another way. It was not just illustrations for a text, the images stood on their own. A single photo can show the news without the need for much text. And to take it a step further, I found the work of Bill Brandt and Man Ray even more interesting. Here the documentary style falls away and from your imagination timelines photos then emerge’

How do you secure an assignment? Does the director call you or do you immediately enter into a dialogue with the DOP?

Kris: “It’s a great honor if a Director asks you and it happened to me a few times on an international level: this was the case with French production Éternité from Tran Anh Hung, with Mark Lee Ping Bing behind the camera. And with Raoul Peck for Le jeune Karl Marx. Normally it is the producer who asks you on the basis of your work, or because they feel that it is a project for you. ”

As a set photographer is it always clear in advance what is expected of you?

Kris: “That is never clear (laughs). It is expected that you take photos that serve for the promotion and the poster. Is it for a book in the end? Do they want to do little or much with it? 1 photo, or a 100…? I remember an one exception.

For a Vincent Bal movie, with Walther Van den Ende behind the camera; Nono, The Zig Zag Kid, the production asked me to take a very specific image, from a certain scene, at a very precise moment. I received no other guidelines and was allowed to do what I wanted for the rest of the day. But it was not straightforward, in a tight attic room, with a sympathetic but nervous Dutch Assistant-Director. The position and stance I had to take was incredibly difficult. We already had some delays and, with the space so small, the Director wanted to send me away. Walther then gave me a sign: ‘Come Kris, come here, you can still just fit’. It was helpful that I had a very good connection with the DOP, because as a photographer you must definitely be able to take the right perspective to also reflect his feeling of the image. I mainly look at color, light and feeling. The frame does not always have to be exactly the same. ”

Do you learn over time what position is best to take, or do you feel that immediately? What makes the difference?

Kris: “Every day on a set is different. Sometimes the camera is placed, for example, in the doorway, and there is not only the DOP, but also the sound people, the grip and the focus puller. Choosing your time well is important to not cause unnecessary stress.

I almost never accept two films at once. You have to take the time that is needed, in case you are asked to keep working longer on the production. Also, when filming days are moved you have to remain available. When they call ‘Cut’, I usually leave straight away.

I will never hang out after the shoot. If possible, I prefer to hang around half a day in advance and then take the photos in ten minutes. Your presence on a set should be pretty much invisible. It is a great compliment when actors tell me that they never stepped out of their role while I took the photos. ”

Patience, and even more patience

Do you still have contact with the DOP or other production units after the shoot or is that usually limited to the set?

Kris: “My work as a set photographer often lasts the longest. After the color grading the DOP has usually done its job. With me it often continues until after the release of the film and I am involved in supplying images for the press. Often that film then remains in your head. You want to deliver your work in the best way. ”

Do you always shoot both the scenes and the crew?

Kris: “For the production, the stills closest to what the DOP makes are the most important. My set photos are often stylized images of the busyness on the set. I mainly try to find peace, not the controlled chaos, and wait for my moment”.

Are you the only person on set who has the freedom to do your thing, to move freely in your job?

Kris: “You certainly have that freedom. It depends on how you view it. I asked an AD how he unwinds at the end of the shooting day. He said that he actually felt that my job was more stressful because he just had to make sure that everyone could do his or her job and did not have to worry about anything else. While I would just have a few minutes during the whole shooting day to capture my images. I had never looked at it like that before.

The fact that I do not take photographs does not mean that I am not present and focused. I decide which moment I want to capture and rarely ask the Director or Assistant Director which images are coming. I must remain alert; all the time. So it can be quite intense work. ”

And finally, analog or digital?

Kris: “To answer your question with a question: can you afford as a set photographer to go analog if filming is done digitally? I am one of the few who still shoots on film. Those images are unique. That is also why I was asked to work on Lost River (Ryan Gosling) with DOP Benoît Debie, and Alleluia (Fabrice du Welz) with DOP Manu Dacosse. Analog and digital, they are really two different worlds and if you do not follow the choice of the DOP, there is sometimes too much discrepancy. Sometimes filming is digital but I still photograph analog to create the right atmosphere and capture the best light. I find these subtle approaches in specific situations extremely interesting. It is also nice to get the freedom to make that decision. That is how I like to work.

“The job of the DOP is often underestimated: every aspect of filmmaking is important, but for me there can easily go some more attention to the DOP. Springbreakers, director Harmony Korine said that in reviews of a film at least one star goes to the DOP. Well, that did not seem like an exaggeration to me. ”

interview by Louis Van De Leest in co-oporation with:

all pictures by Kris Dewitte