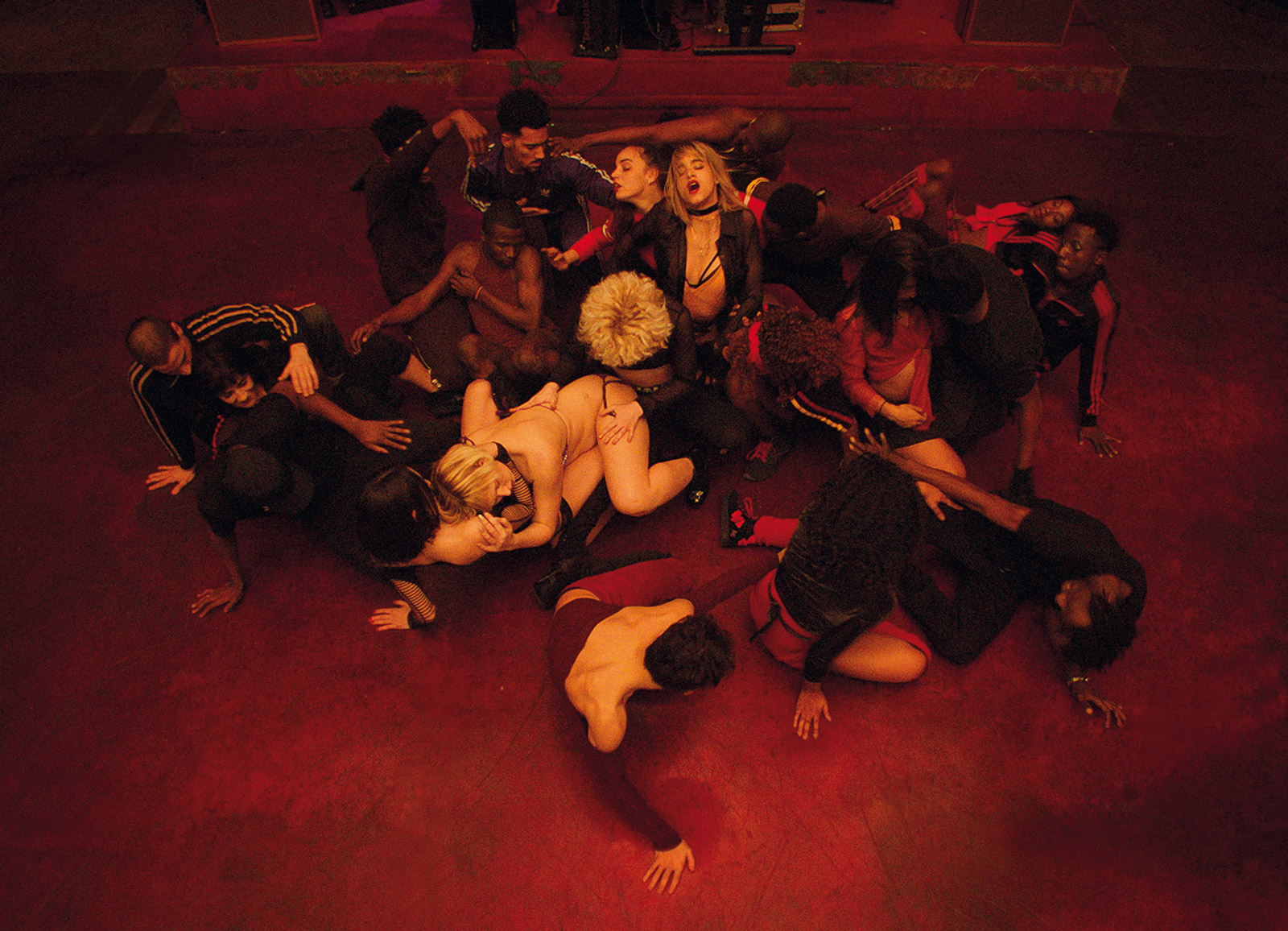 Filmed over the course of two weeks « like doing a movie among friends”, the film Climax is faithful to the themes and style of Gaspar Noé (sex, drugs and a descent into hell). Mixing improvisation and extremely precise staging (like the choreography that opens the film), Benoît Debie, SBC, explains how he approached this shoot full of energy and things a little crazy … (FR)

Synopsis: A group of urban dancers meet in an isolated rehearsal space on the edge of a forest. They rehearse one last time before flying to the United States. At the end of the rehearsal they start a party to decompress but soon it becomes clear that someone poured an illegal substance into the sangria they drank and everything goes wrong. When some get stuck in an endless dance trance, others plunge into madness and horror.

What was the genesis of Climax?

Benoît Debie: Gaspar wanted to shoot this film very fast in November 2017. He had just received green light to do a cheap film and wanted to finish it in time for Cannes. But in the end we had some delays and so we started shooting at the beginning of February. Every day, he rewrote his story and directed his dancers, working in this unique place that was like a soundstage for us, with, as usual, a desire to be able to shoot in all directions, without ever being restrained by the technical stuff. So I had to light everything by integrating it into the set design, by doing a long pre-light of almost two weeks, in parallel with the construction of the set.

In terms of references, we wanted the film to start on something extremely different. An image akin to Christiane F., drug addict, prostitute, which would then segway into something very stylized as the trance and dementia seize the characters. The film was shot in all simplicity, over the course of two weeks almost like a short film done with friends. I found Gaspar to be very relaxed, without pressuring things (as it had been the case on Enter the Void), free flowing, which I think worked well for a dance project and the atmosphere we wanted.

Tell us about the opening sequence …

BD: This sequence took us two days to finish, with a day entirely dedicated to the choreography and rehearsing with the dancers. The choreographer Nina McNeely (having worked with Bjork or Rihanna …) came down from London to refine the routine, while we rehearsed with a 30 feet Supertechno to find the camera angles. Finally, we shot it with the music and a camera choreography extremely coordinated, worlds apart from what would follow for the rest of the film!

Although I love film, which I try to shoot on as often as possible, this project had a very modest budget and was shot on such short notice that we did not really had the option of going the film route this time. Given the preponderance of doing shot sequences, I chose the Alexa Mini, equipped with a single 12 mm Zeiss high speed lens for the entire film. A rather old lens that allowed me to give some texture to the digital image and with which we could shoot in the 4/3 mode, cropping the image in 2.39 editing.

What made you chose this way of framing ?

BD: We wanted to shoot wider on set in order to able to reframe in postproduction. In the final act of the film we were doing more and more crazy camera movement, including rotations around the optical axis, so our 2,39 frame lines were designed so that we could rotate 360 ​​° within the 1.37 image captured by the camera. And so it was then up to Rodolphe, at Mc Guff, to perform all the necessary effects of cropping the images as decided upon by Gaspar during the editing . 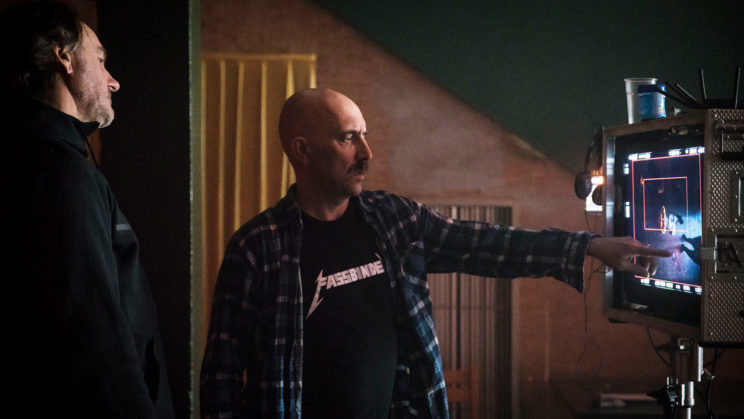 Where did you shoot the film ?

BD: In an old building in Vitry-sur-Seine, which is part of a youth center which is still in use. With its white walls it had the appearance of an old school or an abandoned orphanage … Together with Jean Rabasse, ADC,the art director, we decided to give colors to the different rooms. If a place became rather green or blue than that was a result of the scenes that were going to take place there. In terms of lighting, I did not try too hard to go against his decisions, by simply lighting with the same color used on the walls …

And since Gaspar wants to shoot without any conventional lighting equipment on set, I chose the Astera LED tubes that I had experimented with on the latest Harmony Korine movie in Florida. They look like classic fluorescent tubes, just like the old Kino Flo’s, so they can be fitted in the set to look like regular fixtures and not movie lights.

The huge advantage compared to using fluorescent tubes is that you can control the color and the brightness (RGB + White LEDs), which has led us to shoot in a set that was almost entirely illuminated digitally.

Where did you rent them from ?

BD: At the time these German-made tubes were not yet available on the French rental market, and so Next Shot made the decision to buy about sixty especially for this film, which have since been part of their catalogue. Ernesto Giolitti, the gaffer, spent a lot of time in prelight to solve all the problems of networking the lights, which in the end allowed us on set to search for different moods by wirelessly controlling the lights on an iPad . Gaspar was very excited about this device, because it fits in perfectly with his staging method, which is often very experimental. Operating the camera himself, he could be closer to the actors or even directing them during the shots, while I followed him with an iPad and I was changing the lighting on the fly.

And this new technology worked flawless ?

BD: I originally had some apprehensions about having to deal with flicker, especially shooting on film as was the case on the Harmony Korine production. But it turned out that even extremely dimmed, these tubes are very stable in frequency and cause no disturbance to the image. It’s really a sign of quality in its design and manufacturing .

What scenes are you most proud of in this film?

BD: I really like the red sequence in the last part of the movie, of course. Otherwise there is a shot that comes to mind with Sofia Boutella in front of the wallpaper with its forest design. I remember lighting it in a pinkish red, so she blends into the background in a very strange way with a lot of color separation. A kind of unreal lighting, like an image from a fairy tale, in the middle of hell.

The enormous advantage of being able to work on set live with a tool that reacts to the touch of a finger and what one sees, is exactly in line with what we have been experimenting with since the beginning with Gaspar, namely to create images a 100% in camera. So there is almost no color grading needed for his films, just a few tweaks to balance different shots, because it is on set that we decide what color or density one sees in the theaters . 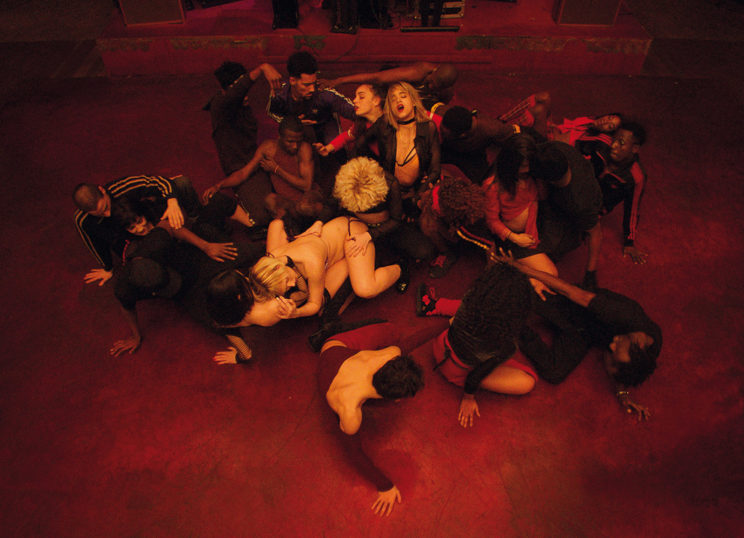 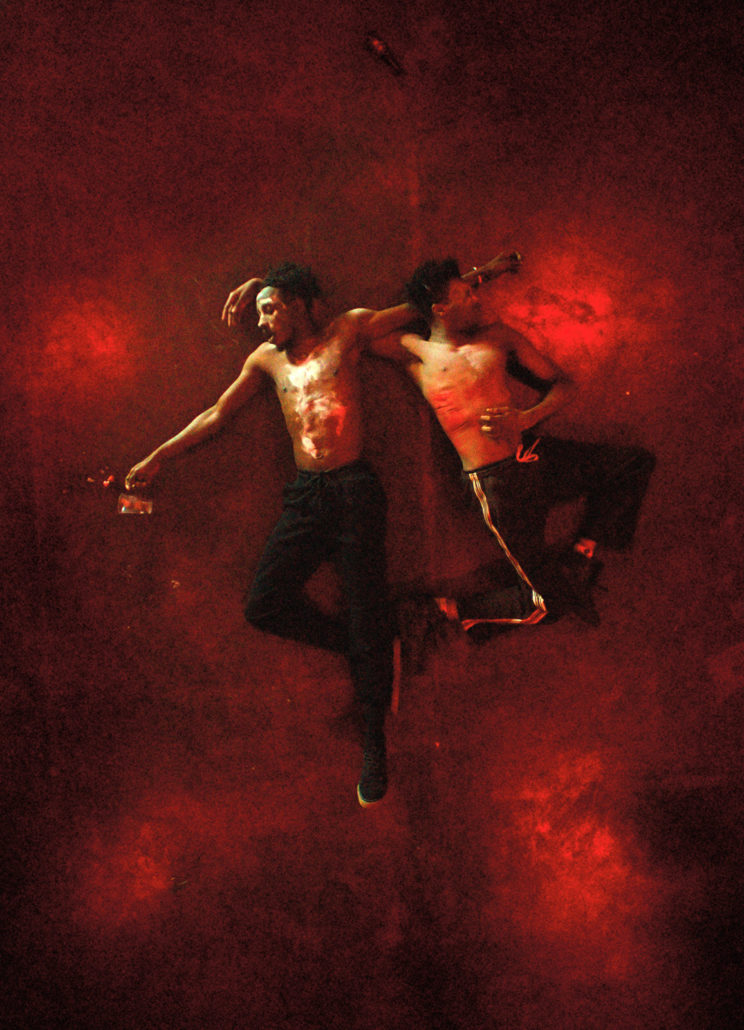 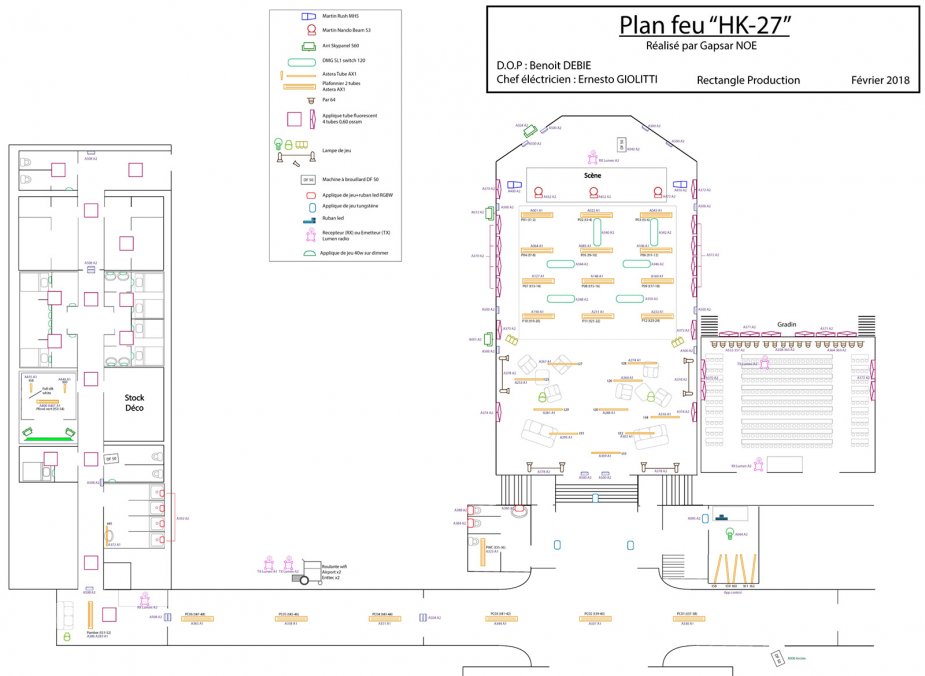 Could you tell us a bit more about the Astera LED tubes that Benoît decided to use on Climax.

Ernesto Giolitti: These tubes look like Kino Flo fluorescent tubes. All electronics and battery power are integrated, and controlling them is done via WiFi on a console using the DMX protocol. Their light quality is rather good, close to what we are used to having on set from other manufacturers (Arri SkyPanel, Rosco DMG …) but one can use them on camera as practicals.

This was the ideal source for a film by Gaspar, since we could easily access the fixture, shoot in 360 ° and of course offer him the possibility to change colors which was one of the visual intentions of the film.

How did you prepare the set?

EG: We spent almost two weeks pre lighting it, at the same time that the art department was decorating the place. It’s rare to be able to work on a film at the same time as the art department , and I have to say that it was really great to be able to collaborate during the course of construction so as to gradually refine things on a really complex installation. In the end, we found ourselves with not far from 1,000 different dmx channels to manage, not only for the Astera tubes, but also for classic fluorescent fixtures that where already part of the locations existing lighting structure, and that we reused in certain areas or for some sequences. On top of that, we also added all the small lamps integrated by the art department (emergency exits, small practicals…) which also we had to be able to control in real time. Programming the system was a full time occupation for one of the electricians, in order to be sure that everything worked when the time came to turn over.

One has to keep in mind that on a film by Gaspard, everything goes very fast, and, as in a car race, there are no delays during the day. It is necessary to be permanently ready on the technical side and to be able to respond to all requests and forms of experimentation.

So if we had some issues that became apparent at start, as this was still new technology they were gradually resolved by receiving firmware updates from the manufacturer. 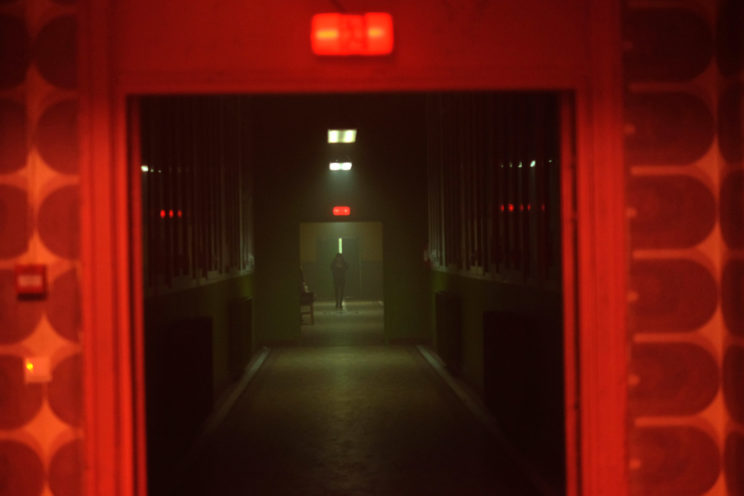 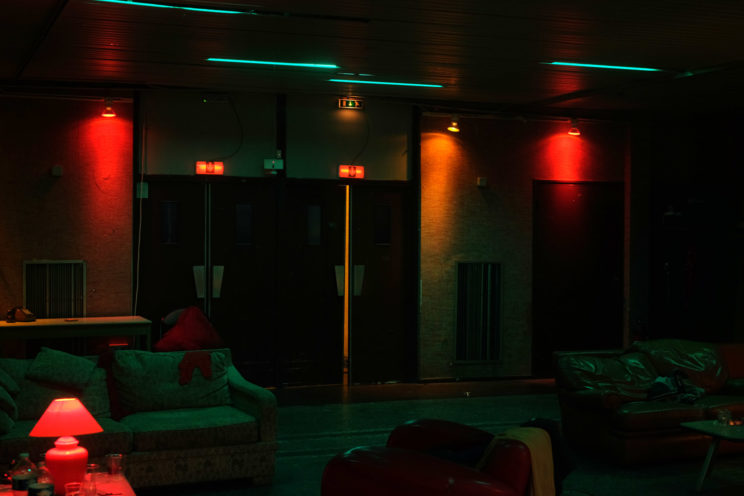 How did you control the lighting in real time ?

EG: Everything was managed using two iPads on set, connected to the fixtures using WiFi. Although that connection was not always possible because the building was built in concrete, so in some rooms we had to work with wired subnets relayed to the WiFi network… In the end, we found our ideal configuration, one iPad that controlled all the Astera LED sources, and the second one which had everything else (neons, practicals ….). The difficulty was to be able to synchronize with Benoît when we were changing the lights on both channels at the same time.

Was the result a new way of working?

EG: The huge advantage of a device like this one, in comparison to using a concert style dimmer console which one sees more often on sets, is that we now have a much more direct control and an instinctive way to light with the DOP and director. We do not have to go through another intermediary like a dimmer board operator, whose work habits are sometimes far from what a film shoot like Gaspar’s needs . Basically, we are very far from the «  we rehearse, we set up and shoot as rehearsed” way but closer to the « we rehearse, and everything can be changed at the last minute on the fly! «   way.

Interview by François Reumont for the AFC. 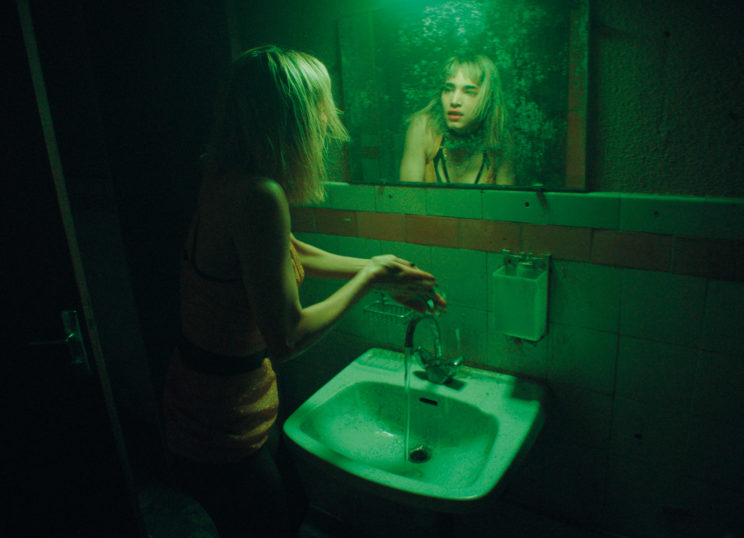 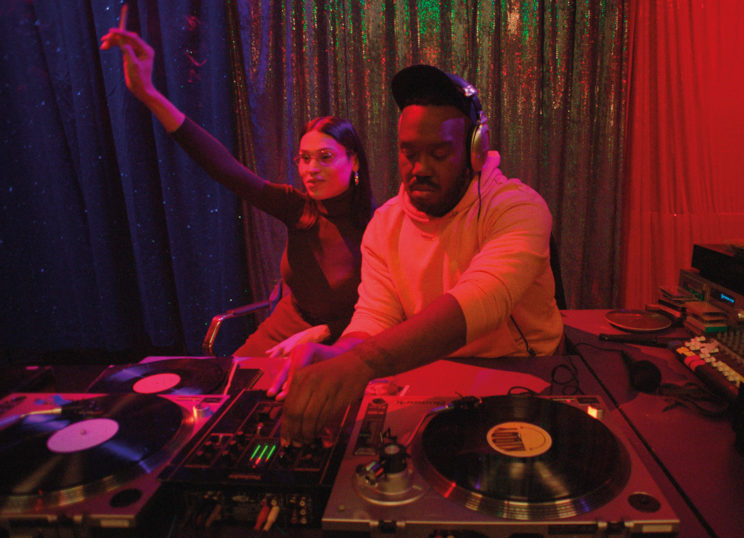