Since Beirut by Brad Anderson is been released on Netflix Belgium this week-end we took the liberty to ask some questions to his cinematographer, Björn Charpentier, SBC, one of AC’s Rising Stars of Cinematography in 2017.

Synopsis: A U.S. diplomat flees Lebanon in 1972 after a tragic incident at his home. Ten years later, he is called back to war-torn Beirut by a CIA operative to negotiate for the life of a friend he left behind. 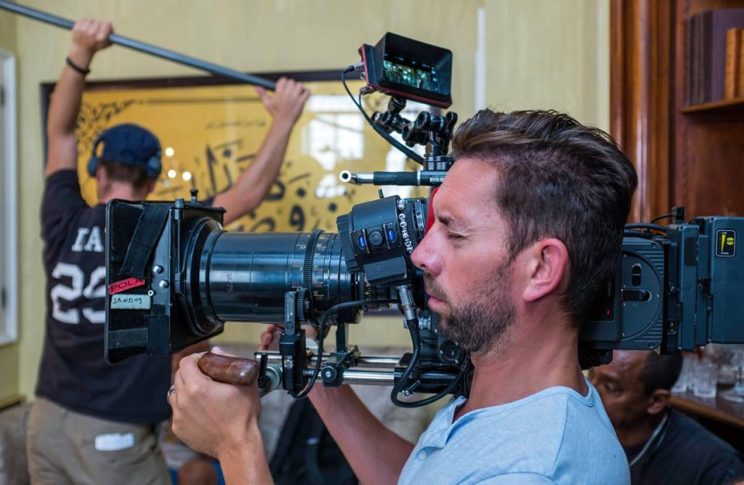 BC : I was born in Antwerp and I began my formal training at the Narafi campus of the Luca School of Arts in Belgium. After that I started working with Danny Elsen, NSC, SBC as second camera assistant. I started as DP on commercials and after five years, I was shooting big international commercials that won several awards including Cannes Gold Lion for Cinematography at the Leica 100. For the last three years, I started shooting narratives. Over the last two years I have been shooting an American Sci-fi movie with Carl Erik Rinsch called White Horse. I’m also finishing a Belgian TV show called Over Water directed by the Norman Bates directors (10 episodes of 52mn) that will come out early 2019.

How did you come to work on Beirut?

BC: My Agent at WP-A received the script from Steve Seata (the producer) who was looking for a new DP for the director, Brad Anderson. From the moment I read the script I knew this was a movie I wanted to shoot. I asked my agent for the contact of the director and I send him some references I had in mind while reading the script and we both had the same visual idea’s.

How was it to work with the director, Brad Anderson?

BC: Brad has a lot of experience in fiction: Session 9, The Machinist, Transsiberian, some episodes of the Wire, Board Walk Empire to name a few… but he kept giving me a lot of freedom to propose ideas, for instance on how to block a scene, so it was a really nice collaboration.

Can you tell me about your technical and/or artistic approach of the project?

BC: Brad wanted to have a very energetic style: both “dirty” and “fast”. Brad wanted to push the limits of darkness on night scenes, while still being real and cinematic. In order to keep it real, I didn’t wanted to light the nights with false moonlight, so we used no fill light, no beauty back light and we kept the lights harsh. My inspiration came from David Fincher’s films like SE7EN and Gone Girl, as well as Roger Deakins’s work on Sicario. From the first conversation we had, Brad wanted to use two cameras. I proposed to shoot anamorphic.

For how long and how did you prep ?

BC: We had four weeks of prep and seven weeks of shoot. Brad didn’t wanted to make a shotlist, he wanted to block the scene with the actors and take it from there.

How did the shooting go?

BC: At first it used to be 37 days but because of budget reasons we had to cut down to 34. Obviously we didn’t really cut any scenes, so the days became heavier. We shot for 33 days in Tangier, Morocco during the summer and 1 day near Boston in the winter because we needed a real american motel, and we couldn’t find it in Morocco.

We shot during the entire time of Ramadam which was a challenge for the local crew. There were some scenes I wanted to shoot in the blue light (right after sunset) and the local crew was very cooperative to give us those moments, before going to dinner. A big thanks to the local crew for their support! 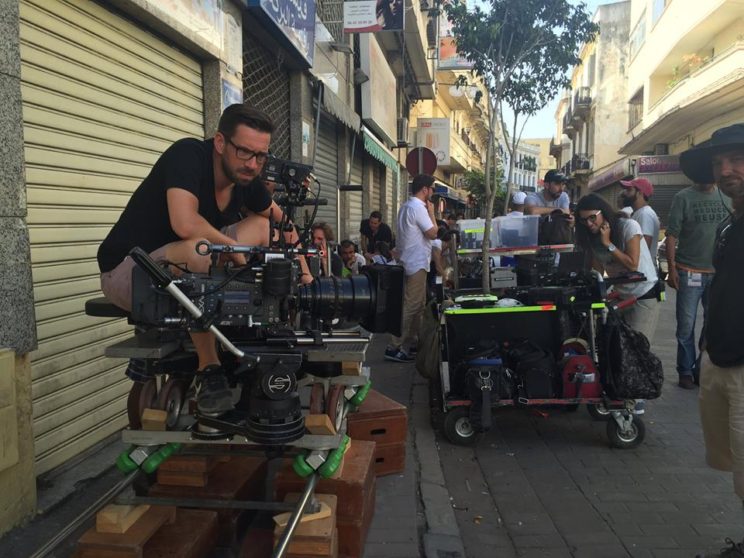 What camera and what lenses did you use ?

BC: We shot on two Alexa XT. We had a lot of night scenes, some even in high speed, and the Alexa performs very well in low light situations. We also had a third camera an Alexa Mini as back up and for the crane work. For the lenses we used two different vintage anamorphic series : the Elite series who has a more romantic softer look, plus the lenses are very sensitive and the Kowa anamorphic series who has harder flairs, but the lenses are very compact which was practical inside cars. We also had an Angenieux 25-250 HR with an anamorphic rear element. Since the film takes place during the ’70 I wanted to introduce some zooms.

The gear came from Eye Lite Belgium except the A cam that belong to me. My first assistant camera was Iuri Bustiuc, who came from Romania. I worked with him several times and the guy is a magician.

How was the lighting handled?

BC: The light theory was that we light everything from within the location with lots of practicals and a lot of murky industrial lights and old fluorescents. No moonlight, no fill, no backlight. We wanted to keep it dark and dirty, but mostly real and cinematic. Given the aesthetic we were going for, I shot with a lot of reflected light, which meant that all the sources in the frame would have to be shiny – the walls and even the make up. I worked with production designer Arad Sawat and supervising art director Ian Bailie to achieve that plan and to come up with a colorpalette that fitted the photography I intended.

For the exteriors we did not diffuse sunlight on the actors, we kept it hard. For the the streetlights in the night scenes, all the Sodium lights were replaced with Mercury lights. I don’t like the orange look of Sodium on the skin tone, I only allowed it in the background.

For the interiors, we didn’t wanted to have any white walls, so we painted or covered them. All the new walls would be reflective, so whenever we put a practical in the frame, the light would reflect several times in the walls. We used different colors for the lights (tungsten, mercury) in order to create a very rich color palette. Even the white drapes were having a cappuccino wash.

Some scenes were only lit with three flashlights. Others with only practicals in different colors. The tech room inside the US embassy basement was shot completely with fluorescent tubes 765 in the ceiling, 3200 desk lights, 10000K  light in the quit-room and the camera at 4300 K. We shot that at 2,8 / 4 stop and we added some ambiance (haze).

Light doesn’t always need to be beautiful, it needs to serve the story. That is what we did in my opinion.

During the shoot I had four gaffers : Tom Vanden Abbeele did the prep, Patrick Bramucci had to go home for family matters, Florin Niculae and finally Thomas Hollaus who did the last three weeks and mainly the night shots. It was a real pleasure to work with all of them.

How was the framing handled ?

BC: Basically the whole movie is shot hand held. We wanted to be close and energetic around the talents. We rolled a lot without rehearsals. Since we could discover the scene’s together with the actors, it all felt more real. The only time we used a dolly was when we used a 500mm lens and I think we have three Steadycam shots in total.

How did the work with the actors go ?

BC: I lit as wide as I could so that there was no real downtime on the cast. They even came over to thank me because that allowed them to stay in character! That is the best compliment a DOP can receive.

How about your collaboration with the other departments : make-up, costume design, art direction, etc. ?

BC: I worked most of my time in prep with the art department. We talked about color, shinny surfaces, reflections, mirrors… Because of his background, the main character is a total mess when he comes back to Beirut. And we wanted to make him appear like a ghost so we played with reflections to make him more transparent.

Make up wise I did the opposite of what is normally done. I wanted the skin tones to be very shiny, so all my lights would reflect on the skin.

How did you handle the post production of the film?

BC: I shoot the way I want the film to look in the final stage. I don’t want to create the look of the movie in post, it has to happen on set. I spent a lot of time with the art director to find the right practicals (old fluorescent tubes) with the correct hue. In the DI I mainly worked on the black level and the saturation, all the rest was as it should have been.

The grading was done at Technicolor in NY by Sam Daley. We had four days for the whole movie and I asked for one more in extra.

How is the result of the project for you ?

BC: This movie was a dream come true! Brad gave a lot of freedom to his heads of departments while knowing exactly what he want. The producers were a joy to work with. I’m very happy with the final results. The film just started it’s course, so we will see where it is going but I’m very hopeful. 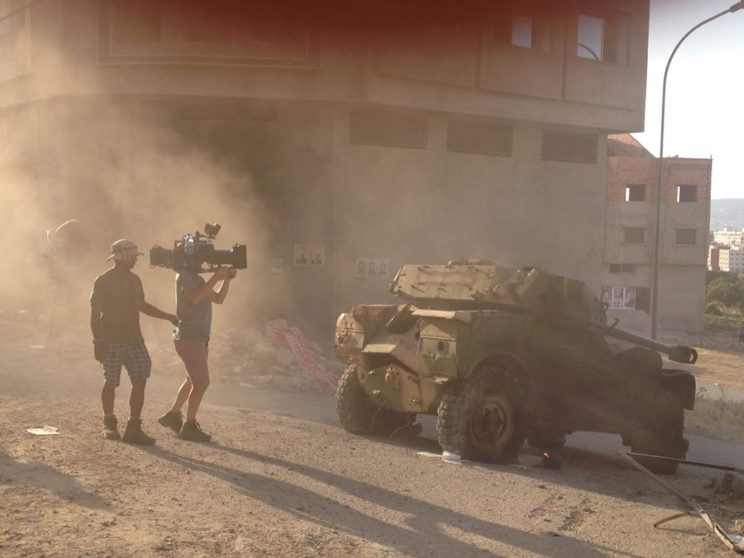